Sep 13, 2018Brian LohnesBangShift XL, XL VideosComments Off on Watch To See An Idiot With A Cutting Torch Collapse A Bridge And Manage To Walk Away 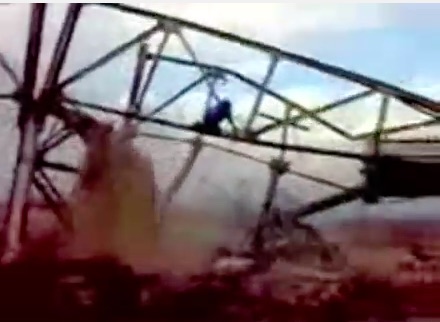 There’s an old saying out there that God looks after fools and children. We have no idea how old this guy is but he seems too tall to actually fall under the pretense of “child”. That means he’s a fool and when you see what happens to him he’ll prove that out.

Basically hanging over the side of a steel bridge, the guy has presumably been told to cut the bridge up. Whether it was him or someone else, the idea to reeks of pure brilliance. The only thing that could have possibly gone wrong actually did. The bridge collapsed when the guy cut through the last supporting beam that was left with his touch.

This may sound bad, and it is but when you see how lucky this guy gets it will blow your mind. Latching onto the only thing he could get his arms around the dude rides a chunk of the bridge right down to the ground. It lands in such a way that our hero is able to literally step off the piece and walk to the camera.

We’re guessing this guy wakes up with nightmares about this moment now and then. He had to have thought that he was a goner when the whole thing went to crapola. Whether because of his cat like reflexes, vodka, or some of there mysterious force, this guy is the luckiest human to walk the Earth