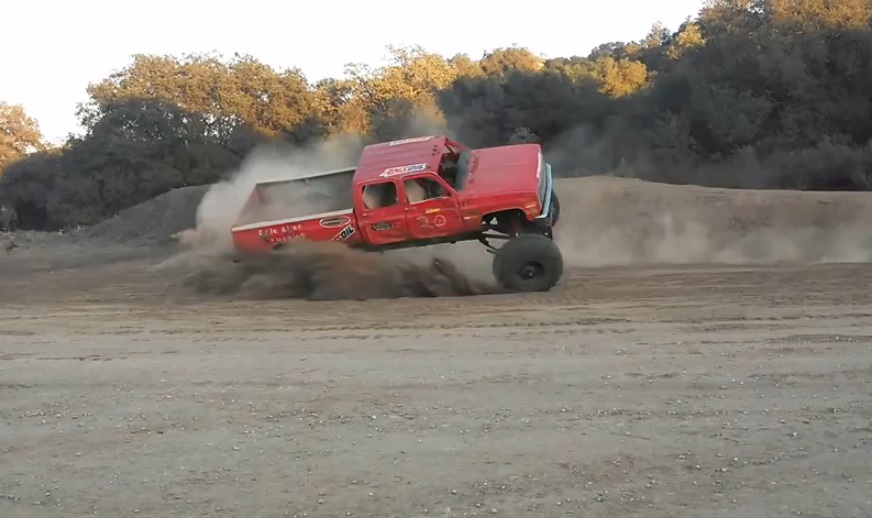 The Top Truck Challenge is to hardcore off-road guys as Drag Week is to hardcore street/strip guys. Some of the nation’s biggest, toughest, strangest, and most awesomely built rigs head out to a “secret testing grounds” in the California woods and put their trucks (and themselves) through hell for days on end. The various events feature stuff like feats of strength where competitors attempt to pull a loaded dump truck up a steep grade and something called, “The Tank Trap” which is a deep gulch filled with rocks, deep mud, seemingly impossible to climb angles, and pure misery. Many trucks die gruesome mechanical deaths long before even reaching the end of the week….but those normally come during the competition, not in the evening after it.

The truck you see in this video, a crew cab Chevy on Rockwell axles was one of the competitors in the Top Truck Challenge this year and after things were over for the day the competitors and their crews were all hanging out together, no doubt bench racing, telling stories, and laughing…when they weren’t wrenching. You can totally see how the next part happens. The idea pops up about going over to blow some donuts in an open lot and someone rises to the occasion, namely the driver of this Chevy.

The dude gets in the thing (sans helmet), kicks ‘er down into low, turns the rear steering opposite the front and lands on the gas. Instead of breaking the tires loose and pulling a monster truck-esque “dog chasing its tail” donut or “cyclone” as we have heard them called, the off road tires rip into the dirt and the thing accelerates hard enough and the center of gravity is high enough that the whole works comes over HARD. The truck goes all the way over. Thankfully the driver was OK and he was actually the guy who posted the video as a bit of a laugh at himself. The truck wasn’t exactly a show queen to start with some some rumpled sheet metal didn’t hurt the cause too bad. No word on whether it had a roll bar or whether it kept on in the competition. We’re just glad the dude was OK. This mighty Chevy sure lands with a THUD!

It's Official: Dodge Challenger Hellcat Has 707 Horsepower - Cue Every Expletive Known To Man. 2014 Car Craft Street Machine Nationals Coverage: The Weird, The Wonderful, And The Totally Cool At Du Quoin