Watch This Upside Down (But Right Side Up?) Ranger V770 12-Cylinder Engine Run and Spit Fire! 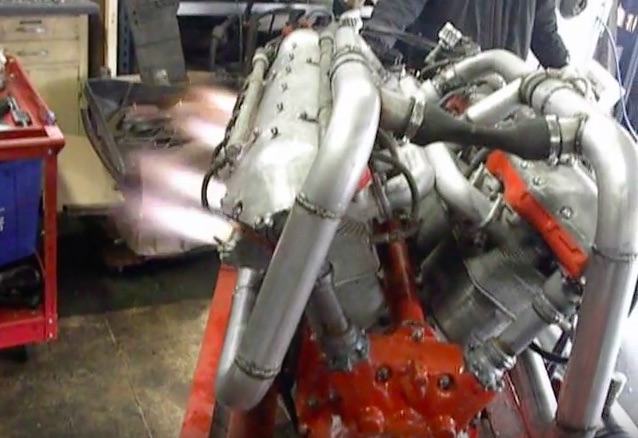 The Ranger V770 12-cylinder engine was a stalwart power plant for a slew of airplanes that included a bunch of trainers that were used to get pilots ready for war during WWII. A single overhead camshaft V-12 design, it was also equipped with a supercharger. Displacing 773ci it made about 520hp with 7.5psi of boost cursing through its veins. In this video we see one of these engines fire up without exhaust manifolds on it or anything of that nature. The result is that fire blasts outside of one bank of holes. We kind of love that type of thing.

The only real weird thing about the video is the orientation of the engine. The Ranger was designed to be run as an inverted V12 meaning that the oil pan is typically the first thing you see and then you look DOWN at the cylinders and cylinder heads. While this was a great design for airplanes, when guys started jabbing them into dragsters and cars back int he 1950s they decided that they needed the mill to sit like a traditional engine with the heads on top. That’s what we’re looking at here. The engine is actually upside down according to how it would have been run at the beginning of its life.

The Ranger was a very workaday engine and never has gotten the kind of mythical love that the Allisons and Merlins got. We can understand that with “only” 520hp (that was obviously spectacular in the 1940s) and not having the mystique of battle behind it. We’d love to see what someone could wring out of a Ranger with turbos and EFI on it, just because. Lastly, we find the Ranger to be a handsome engine. Some mills are better looking than others!

Let's Get Weird: This Video Looks At The Strangest Concept Cars Of The 1980s Urban Hillbilly Video: 8.5, Small Tire, And Big Tire From Ozark Raceways Battle In The Ozarks

2 thoughts on “Watch This Upside Down (But Right Side Up?) Ranger V770 12-Cylinder Engine Run and Spit Fire!”