Watching This Big Rig Rip Donuts And Wipe Out A Fence Is Highly Entertaining, Unless You’re The Fence 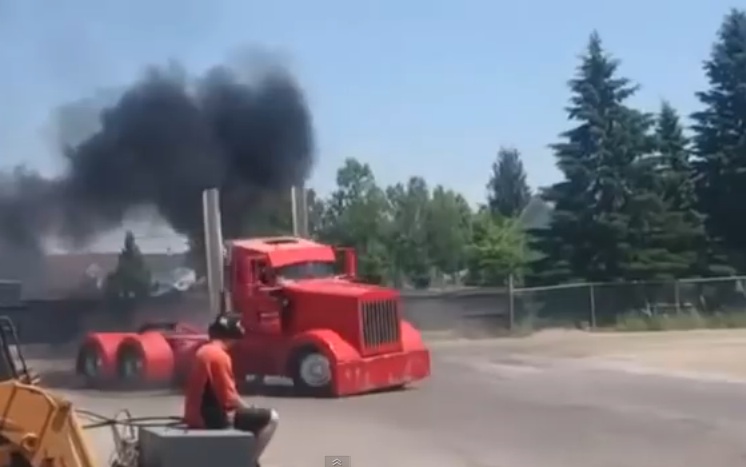 The formula to make a big rig rip donuts is pretty simple. You take one nutty driver, one majorly powerful truck, enough space to get the sucker into spin cycle, and a few spectators to run for their lives when the truck takes the fence they were hanging on and gathers it up like a clothes line. It doesn’t look like any people get tangled up in the fence when the truck spins wide during one rotation and catches the barrier, sending it flying, which is a good thing. The other good thing is the fact that this guy has both axles locked, eight tires spinning, and some pretty perfect donuts happening before the fence gets ripped down and the announcer lets out an authoritative, “WOAH”.

We wish that there was some in-cab video from this donut session because the driver had to be working pretty hard in there, working the wheel back and forth to keep the truck spinning in a relatively tight circle. You’ll see where he makes his error before catching the fence as he had to tweak the wheel and the truck stepped out a little bit, spinning a wider arc than he had been spinning before. The monotone paint is cool as are the humongous stacks that direct the copious smoke skyward every time the driver lays into the throttle. We’re suckers for the full rear fenders as well. They give a great look and with the low stance of this truck, seem to really aid in that ground hugging aesthetic.

Unfortunately we’re light on technical data on this truck. Can’t say what engine, transmission, etc the rig has in it but we can say that this looks like the most fun you can have with your pants on, flying fence notwithstanding.