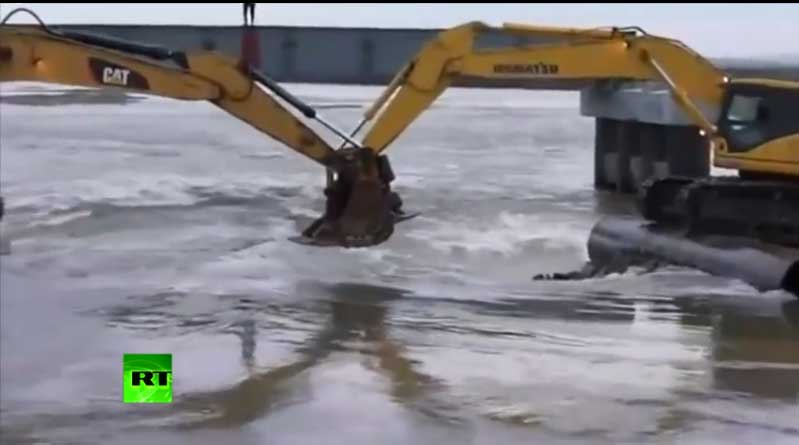 These are a pair of excavators being expertly operated in order to ferry a group of Russian people across a raging river. There was apparently a problem with the bridge, like it didn’t exist anymore, which necessitated this operation. There’s a Komatsu on one “bank” and there’s a trusty Caterpillar on the other.

The idea is brutally simple. As many people as can jam into the bucket hop in and are swung out over the river as far as the dipper on the Komatsu will take them and the Caterpillar meets them in the middle where they jump into its bucket and complete their trip across. It looks like 3-4 people along with their crapola can fit in the bucket at a time so the large group of people waiting to cross will be there for a while. That being said, it sure beats the alternative of being stuck on that side of the rapids.

The only thing that seems like it is shaping up to be scary is the little area that the Komatsu is sitting on. It seems like the raging waters will wash that dirt right out from under the machine at some point. Being that this is Russia, that would most likely happen when the highest concentration of people are in the bucket. But hey, the only footage we get to see is people gliding safely across in what looks to be a successful operation.

People are smart, machines are cool, and we kind of want to go for a ride outselves!