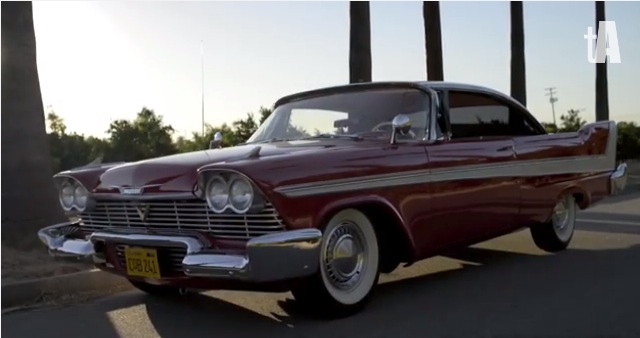 Halloween…one of my favorite times of the year, where things seem a little bit unsettled, and demons come back to haunt those who deserve the retribution. As a car guy, the one car that always comes up during this season is the 1958 Plymouth Fury that Stephen King immortalized in his novel Christine. The possessed Plymouth stirred many an imagination when King released the book in 1983, and when the movie came out later that year, with John Carpenter directing, you can bet that those imaginations were reeling from the shock of actually seeing that low-slung boulevard cruiser creeping around, with doo-wop music rocking out from the speakers before the Golden Commando V8’s scream pierced the night, with her headlights cutting beams through the darkness. It is a story of love, of obsession, and of revenge.

Martin Sanchez was a kid who was into cars. He had built up a 1969 Pontiac convertible that he had gotten when he was 14, but the car ended up getting trashed at school. His auto shop teacher gave him a copy of Christine to read, since his drive and dogged determination was a spitting image of Arnie Cunningham. Inspired, Sanchez set out to build a two-door version of Christine (in the book, she’s a four-door.) Unfortunately, his timing couldn’t have been worse: at the same time the studio was buying every Belvedere, Savoy and Fury they could get their hands on for the film. Sanchez had made friends with Al Newman, who owned Classic Wheels in Anaheim, California, and when Sanchez mentioned that he wanted Christine, Newman delivered…by dropping what was left of the studio car coded as “Muscle Two” off at his house. The car had to be carried on a rollback, rescued from the crusher.

“Muscle One” and “Muscle Two” were the two running cars on set, according to Sanchez, and “Muscle Two” was the only manual transmission car that was used. “Muscle Two” is the car used in the scene where Moochie Welch meets his end in a loading dock. In the process of restoring the car Sanchez tracked down the location of the extra cars used in the film, all of which had been taken to a junkyard in Pasadena. The front stainless trim comes from the “burn car”, most of the other chrome came from the “ram cars”, and the interior was pieced together from what he could locate from all of the cars. By the time he was 18 Christine was streetworthy and back to her old self.

The video clip shows just how attached Sanchez is to the car. He has memorabilia, including the CQB 241 plate from the movie, some extra trim pieces, scripts, cutouts, and more. Over the years some of the stars of the movie such as Alexandra Paul, Keith Gordon and John Stockwell have signed the glovebox lid, as well as John Carpenter himself. Watching this video, created by the folks at theAficionauto, you can see some parallels between Arnie’s story and Martin’s. Hit play below and soak in the vibes of a real Christine Fury and the owner who loves her. Just watch what you say.

Cancer-Free: Making The Last Rust Repair On The Valiant Wagon Watching Russian People Ferried Across A River In The Buckets Of Two Backhoes Is Pretty Awesome