Weird Science: Watch This Guy Fire Up A Small Engine Topped With A Wooden Cylinder Head! 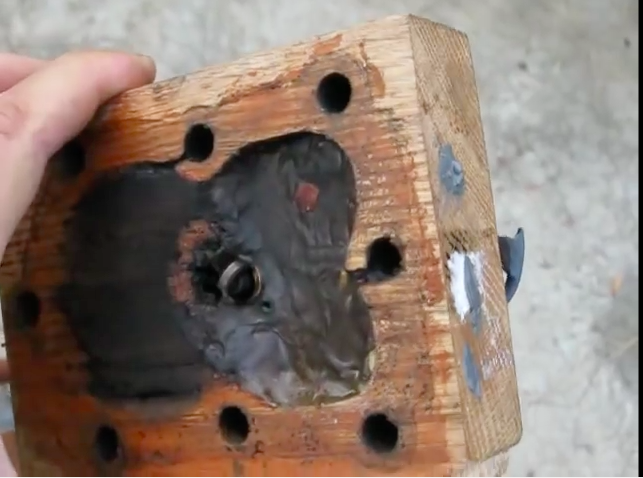 Sometimes curiosity gets the best of people and drives them to do stuff that may not exactly advance the collective knowledge of humanity but it does make for interesting stuff. Case in point is the video below that shows a guy firing up a small one cylinder engine topped with a cylinder head made of wood. We’re not kidding! The coolest part is that it actually runs for a short time before succumbing to the kinds of stuff that one would expect any engine sporting a wooden cylinder head would.

This is a side valve engine as it would be insanely complicated to create a wooden over head valve head and that would REALLY be an olympic level waste of time. With this being a flathead, the topper just needed a combustion chamber, bolt holes to clamp it down, and somewhere for a spark plug to thread in.

Being that wood burns and being that internal combustion engines rely on internal combustion to run, wood is an obviously bad choice for a head. That being said, there’s a certain interest in simply seeing what would happen to cause the thing to fail. Does it burst into flames? Does it burn slowly and lose seal? Does it splinter and break because of the pressures it is subjected to in the combustion chamber area?

This guy put some work, some thought, and some time into making this experiment and we commend him for it. Does it work? Kind of and for a short time but the engine runs and his wooden cylinder head is the reason why. Sure you would have to be replacing these every couple of minutes but scrap wood is cheap and once you make a couple hundred of them the turnover should be short work!

2 thoughts on “Weird Science: Watch This Guy Fire Up A Small Engine Topped With A Wooden Cylinder Head!”