What’s Worse Than Turning Your Pulling Tractor Over? Turning It Over And Blowing Up All The Engines

Oct 15, 2019Brian LohnesBangShift XL, XL VideosComments Off on What’s Worse Than Turning Your Pulling Tractor Over? Turning It Over And Blowing Up All The Engines 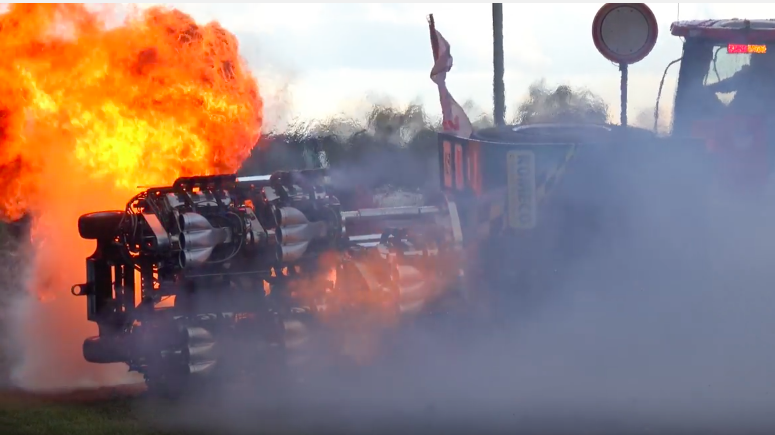 We have showed you plenty of pulling mishaps over the years but this one has a special class that it will end up in. Why? Not because of the rather gentle roll but because of the fact that after the tractor rolls onto its side the throttle gets jammed open and every one of the huge blown engines powering the rig explode in fine fashion. We’re talking bonafide pyrotechnics show insanity here. We watched the video a couple of times and other than an isolated few other incidents, blowing up all the engines is not the normal outcome for this stuff.

It seems like the motor that ends up on the bottom left of the frame is the first to go, kicking out the head gaskets and then the others are really soon to follow. Then the fire breaks out and then the massive plume of fire, followed by black smoke arrives on the scene. This seriously looks like it was filmed for a Jerry Bruckheimer film. The whole thing is almost theatrical in the way that it plays out.

If you think this is expensive you are likely shooting low on the estimate. Remember that this was filmed in Europe so the parts and pieces that are making all this horsepower have been imported (at great expense) by the owner of the machine. It would be a massive blow for this to happen to an America team but a Euro pulling operation? There’s all kinds of taxes, tarrifs, and other charges that get stacked onto the top of already expensive parts. Anyone who is a racer or motorsports competitor of any sort over there is hardcore beyond description.

So if you think you are having a bad day, consider the bill for the puller featured here. Your head will spin!

Press play below to see this wild, flaming tractor pulling crash from Europe –