Workhorses Of Industry: This Promotional Film Shows Why Jeeps Were The Most Versatile Trucks Ever Made 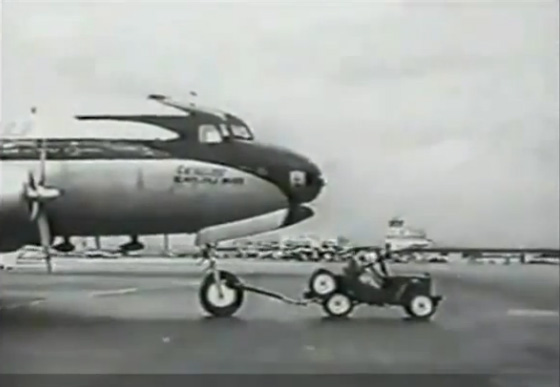 In the realm of old promotional videos, this one from Willys-Overland that shows all of the incredible things that Jeeps were used for in their heyday ranks among the coolest that we have ever seen. While it begins with a short sales pitch as to why the new “universal” Jeep is better and stronger than the ones that have come before it, the video then shows the “new” Jeep pickup, Willys station wagon, and Willys panel truck some 4×4 and some 4×2. After that is when the good stuff starts. You’ll see Jeeps with trenching units hanging off the back, Jeeps towing airplanes, Jeeps with PTO driven welders and chainsaws, etc. They were literally Swiss Army Knives on wheels and there was a whole industry developed around making attachments and implements for them. Yes, the Germans have their Unimogs and they are neat, but the Jeep’s compact size and pluggy little four banger engine allowed it to be used for jobs that a Unimog could never even consider doing.

The section with the “gas station owner” talking about plowing, towing, and pushing cars with it is great and the whole video kind of left us with the question of, “Why did they stop making these again?” Honestly, watch this film and think about it. Yes, the little Jeep is quaint by today’s standards but in all of the jobs you’ll see it do, what do we have today that does them that much better and more efficiently than a Jeep was capable of doing them? Stuff may be more complicated and comfortable for the driver but that doesn’t really mean that it is any better in a practical sense.

This is a super great video, especially if you love old Jeeps as much as we do!

This Video About Mickey Thompson Founding SCORE Is Spectacular - Danny Thompson Tells Epic Story The Secrets Of The SD-455 Revealed: A Look Into The Guts and Glory Of Pontiac's Greatest Muscle Car Engine

One thought on “Workhorses Of Industry: This Promotional Film Shows Why Jeeps Were The Most Versatile Trucks Ever Made”