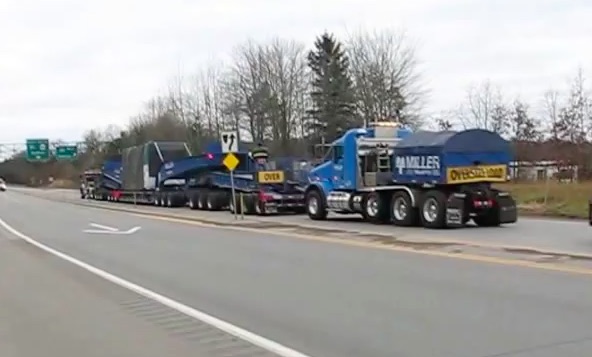 Driving back from the PRI show in Indianapolis back to BangShift Mid-West took a little longer than expected, and it wasn’t due to the incoming snow storm the weather channels were predicting. I left early enough to make sure that Angry Grandpa didn’t see any more snow than the dusting it got overnight, but between Indy and the Indiana/Kentucky border, for the most part, I was stuck in traffic that was doing maybe fifty miles an hour in 70 MPH zones. With the Chrysler’s transmission hunting between 4th and 5th, as if to announce it’s displeasure at being forced to maintain a Reagan-era Interstate pace, I sat, firmly planted behind a late-model Suburban, wondering what the hell the holdup was. I knew people were trying to leave PRI quickly, but even if every last person at the show suddenly decided to drive to Louisville at the same time, traffic wouldn’t have been this bad.

Thirty minutes from the Ohio River, I started to see clues: cop cars, pilot cars, and lots of flashing lights. Ok, a wide-load haul would explain why traffic was slow to pass, but it wasn’t until I got to just within a car’s length of the rearmost police escort that I got to see what the fuss was about: requiring a lead and pusher tractor, the monstrosity that is one of Miller Transfer’s massive Trail King 400 haul units was trucking along. Capable of hauling up to 400,000 lb. of cargo easily, widening or narrowing to whatever the load requires, and able to provide three feet of ground clearance if necessary, these units are some of the most heavy-duty street-legal pieces of rolling stock I’ve ever seen in operation…and I’m used to seeing the Army’s HET system hauling M1 Abrams tanks around.

Test Your Gearhead Knowledge: The Answer To Last Week's Question! Would You Rather, 'Class of '57' Edition: Chevy Stepside or F-350 Utility?