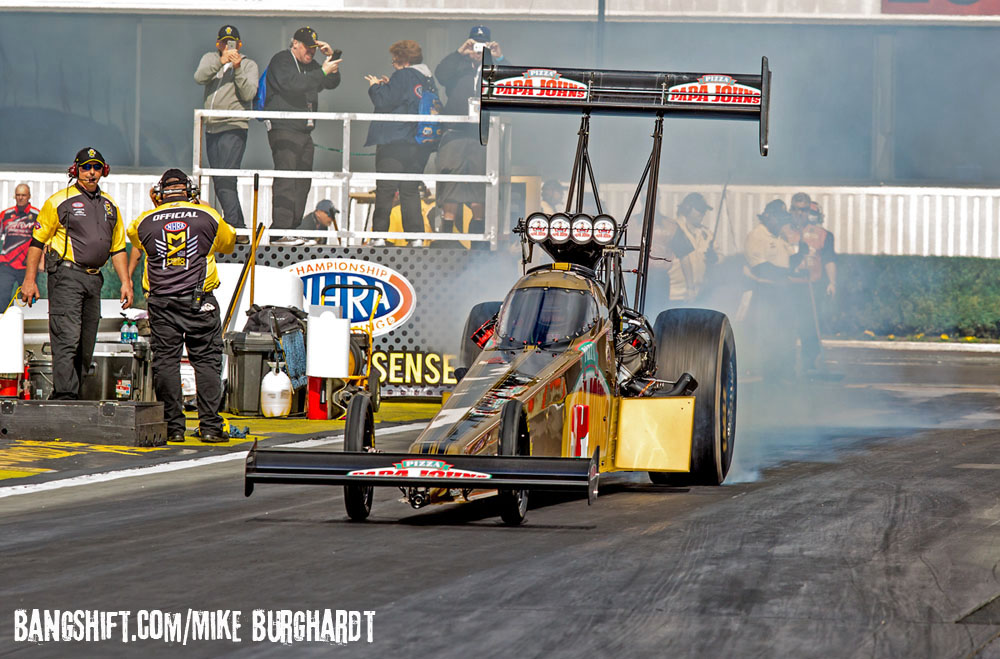 After local weather forecasters warned of a rainy Friday and Saturday at Auto Club Raceway at Pomona, the storm clouds moved away providing amazing performance, with track records and a great start to the 2017 NHRA Mello Yello Drag Racing season.

SoCal native Leah Pritchett grabbed her second career Top Fuel No. 1 qualifier at her home track on Saturday during the final qualifier for the 57th annual Circle K Winternationals. Pritchett, who grew up in nearby Redlands, Calif. Made her first pass down a dragstrip in a Jr. Dragster here at Pomona Raceway when she was eight-years-old. 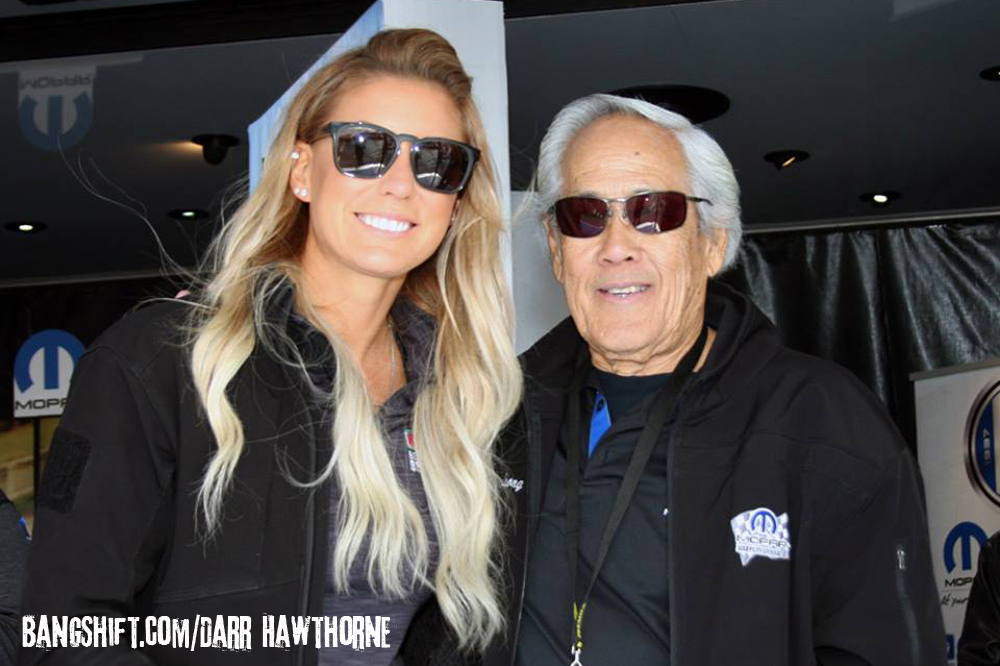 Pritchett surpassed Doug Kalitta’s earlier #1 position 3.686 at 329.58 in her Papa John’s Pizza DSR dragster when she ran a career best elapsed time of 3.672 seconds at 327.90 mph in the final Saturday afternoon session.

“This is exactly a testament to things that I saw in the off-season,” Pritchett said. “We don’t have a whole bunch of different parts than anybody else. Those guys are on our heels 100 percent and if we’re off by two-hundredths on the tree then we’re getting waxed. So the meticulous work that my guys have done in the off-season, the attention to details plus this extra power we’ve been able to create and we showed in Phoenix, we put it all on the track. I could not be more excited.” 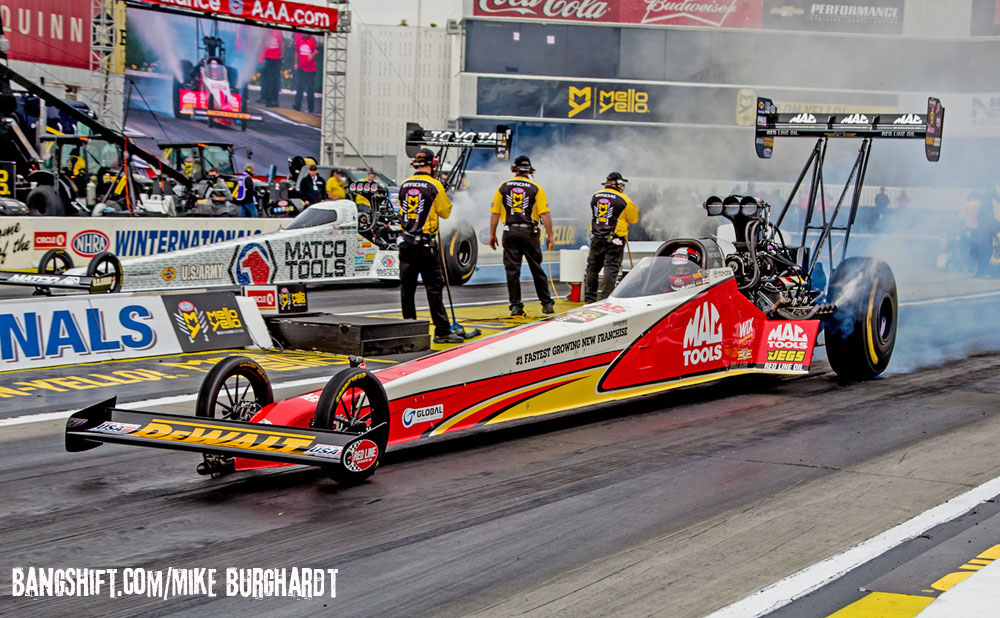 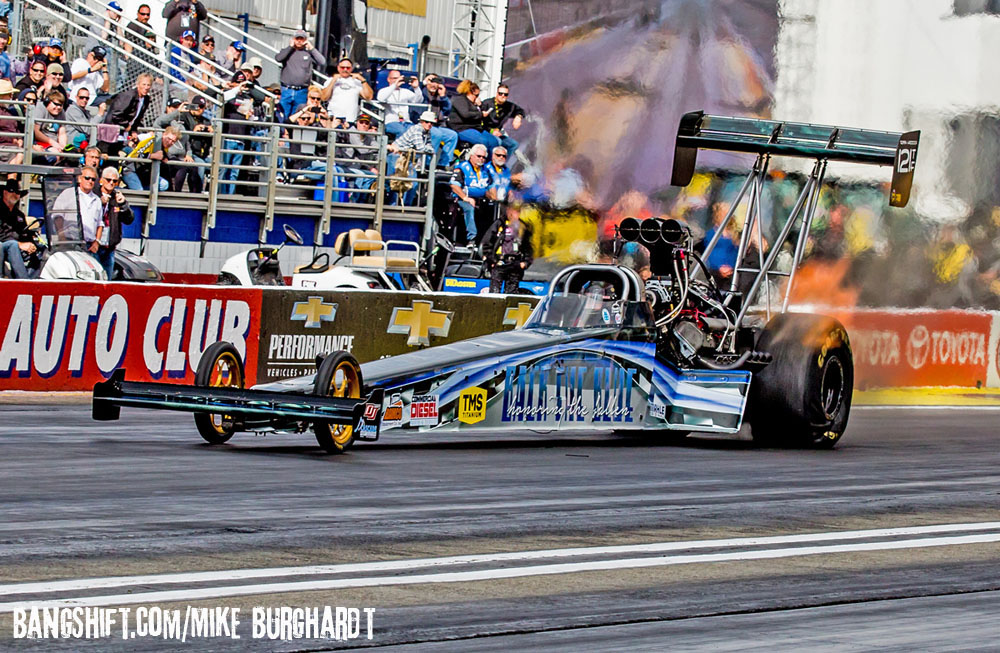 Privateer Terry Haddock (5.433) blew it up big time on his final Saturday qualifying lap and will race #6 qualifier Brittany Force (3.706) in Sunday eliminations. 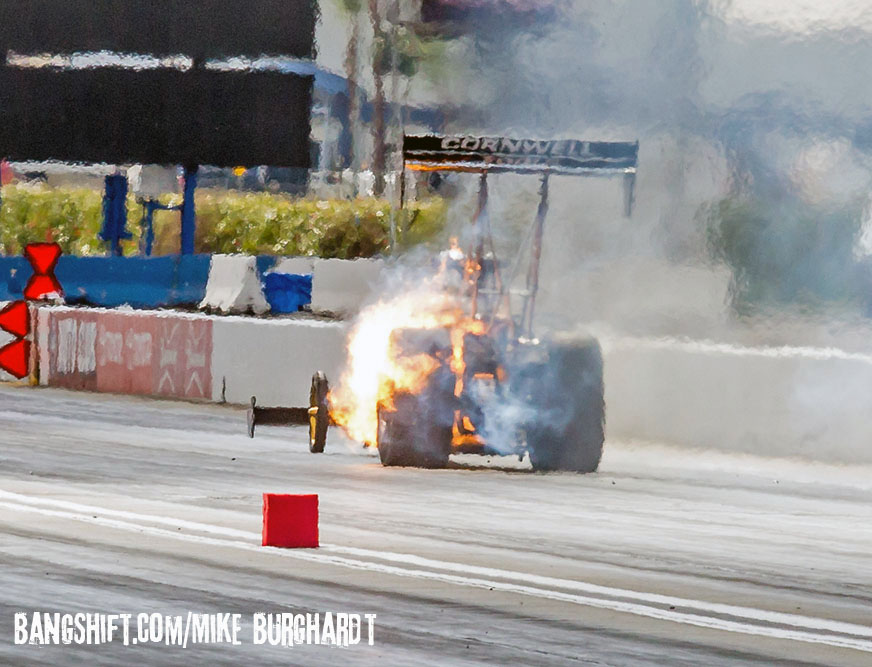 In funny car, John Force went on a long rant on the Pomona Raceway microphone when he thundered to a track record 335.15 mile per hour track record run in the early Saturday qualifier, but in near darkness and near perfect conditions, Matt Hagen made his mark.

Hagan and veteran crew chief Dickie Venables then nailed the #1 position on the last run of the night with a track record elapsed time of 3.822 seconds at 335.57 mph, that matched the NHRA world record the team set last year. 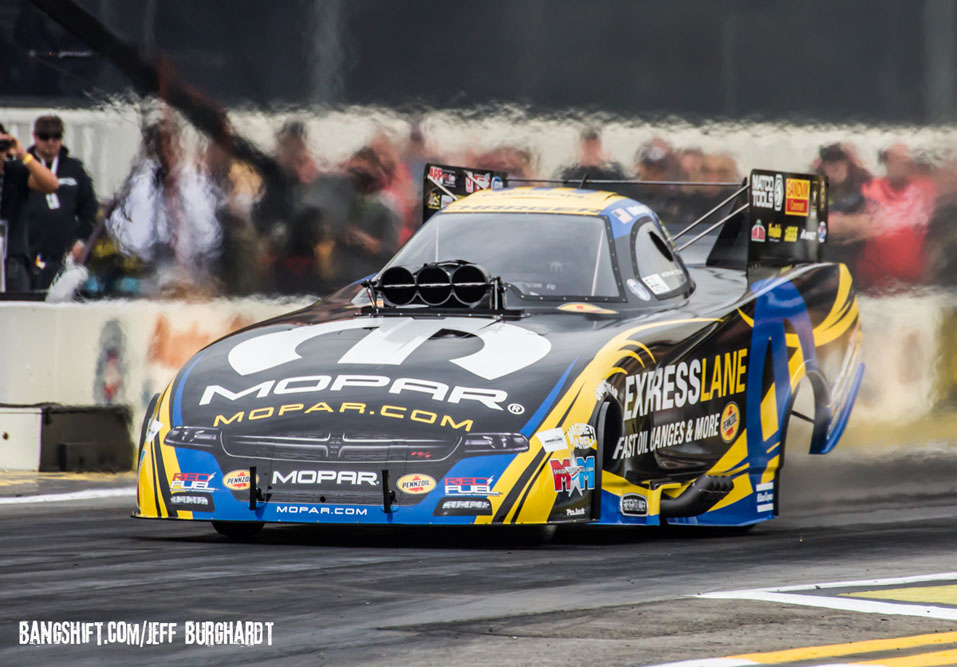 Hagan said of that final run, “We went out there and just laid out a great number, that just speaks tons for (crew chief) Dickie Venables. Tomorrow’s race day and anything could happen. Even having a great racecar you still have to stay very humble because anything could happen on race day. I’m just really glad we are starting the year off the way we need to.” 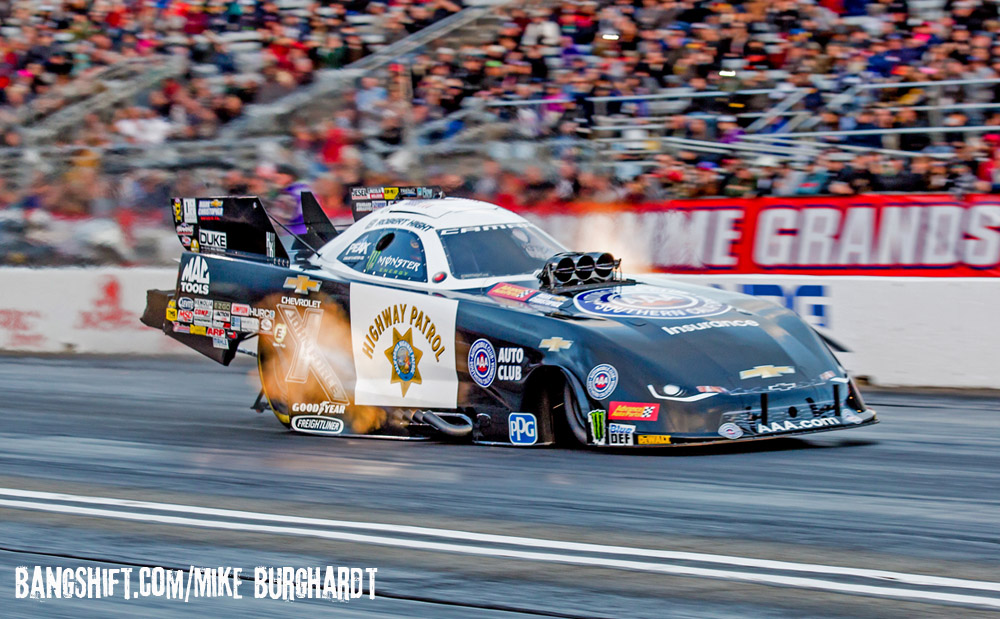 2016 Pro Stock champion Jason Line ran a 6.525 pass at 211.53 in the final qualifying session, driving his Summit Racing Camaro to earn him the 50th No. 1 qualifier of his career and his second at the Pomona Winternationals. 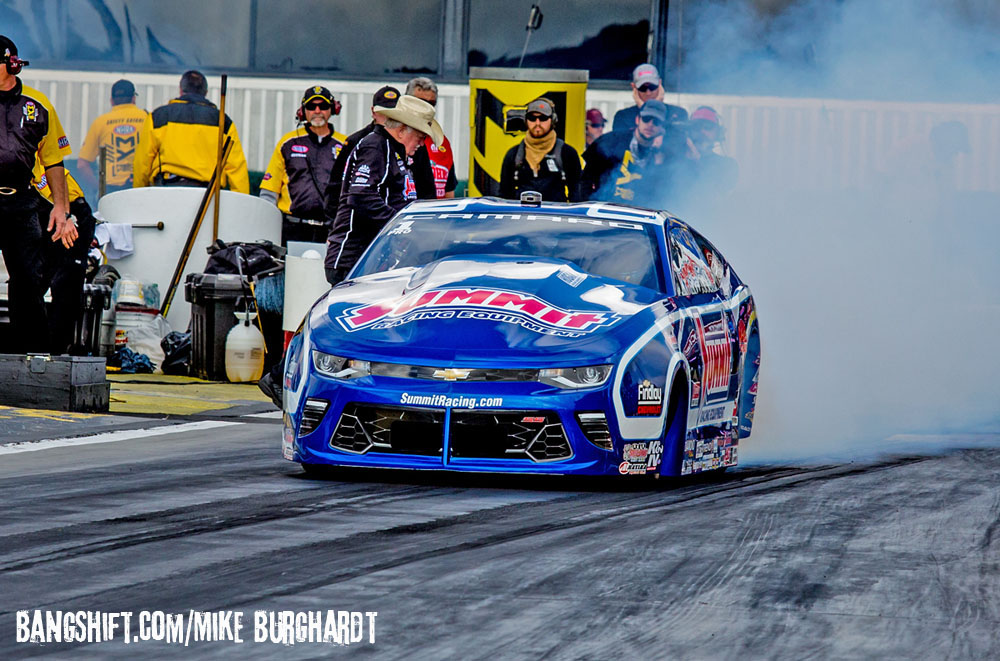 Line said of his Pomona performance, “Starting the year off this way, that’s what you hope for and being one and two (with teammate Greg Anderson) is a great thing for us. Honestly I don’t think we are any faster (than last year). I think we are the same and I think everyone has improved a lot.”

Line faces Val Smeland in the first round of eliminations, Greg Anderson qualified in the second position with a 6.530 at 211.66 and will race Kenny Delco. 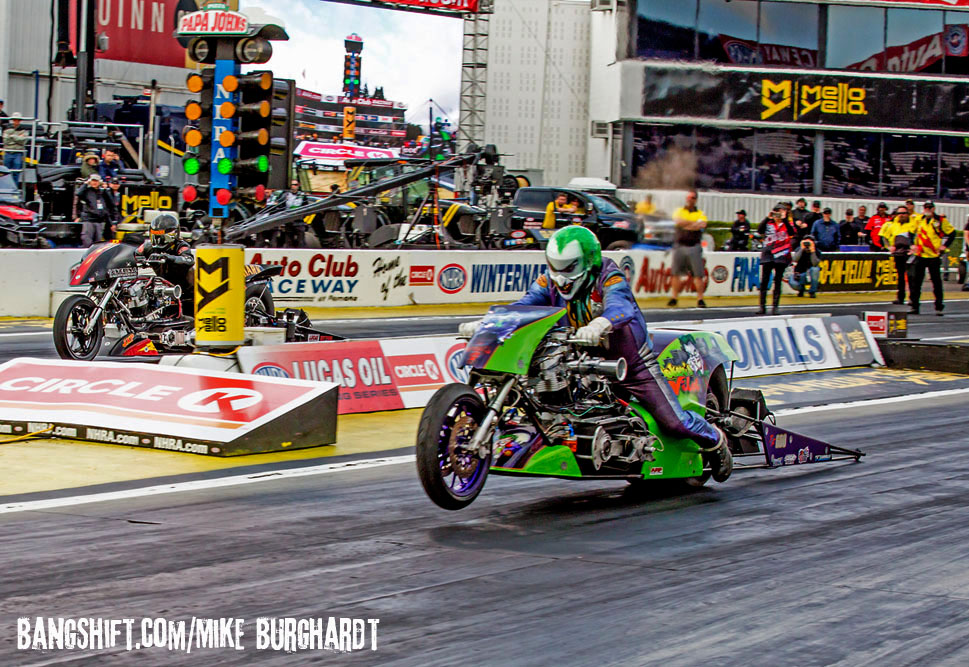 As an added feature, NHRA has included Fuel Harleys to the weekend show, Canadian Andy Beauchemin (6.774) rides his “Joker” Harley and will meet #1 qualifier Jay Turner (6.446/212.26) in the first round of eliminations.

Final eliminations for the Circle K Winternationals are slated to begin at 11 a.m. on Sunday. Final round racing will be televised live on the FOX national broadcast network at 1 p.m. PT/4 p.m. ET.

Here Are 500 Photos From King Of The Hammers 2017 In Johnson Valley. Rocks, Dirt, Dust, And More! Morning Symphony: Thoroughbred Italians Playing In The Snow