Video: Ripping Around Tokyo In A 700hp 2JZ Swapped Rolls Royce Phantom – This Is Beyond Awesome! 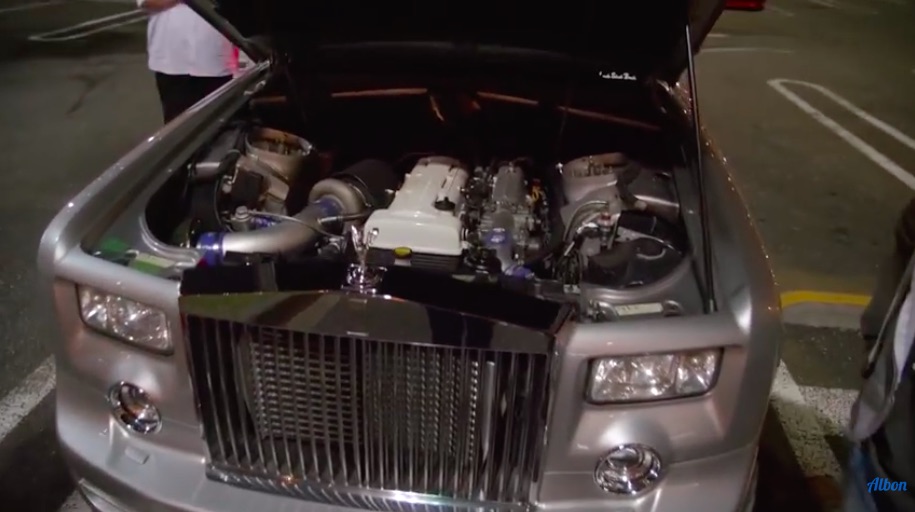 (Words by Tom Lohnes) – Now, you’ve probably heard of the Rolls-Royce Phantom and the Toyota Supra, which are two completely different cars. The Rolls is the pinnacle of luxury in an automobile and the Supra the most iconic Japanese car of all time. What if you combined them? Well if you did, you’d get this.

Yes, this is a Rolls-Royce Phantom with the 2JZ inline-6 ripped out of a Supra inside of it. So, how did it come to be? Back in 2004, a Japanese business executive bought this car to drive to his office in Tokyo every morning. 2 years later, the massive 6.75-liter V12 in the Rolls failed, and rather than paying upwards of $10,000 to fix the engine, he got creative. This awesome dude swapped in a 3.0 Liter twin-turbo inline six, the tough as nails 2JZ from the even more well loved Toyota Supra.

The 2JZ in this application for the behemoth 5,200-pound Phantom is tuned to 706 horsepower and 610 lb.-ft of torque, which is a huge upgrade from the 454 hp and 510 lb.-ft that the naturally aspirated V12 made. All this power is transmitted to the rear wheels through a 7-speed automatic with the shifter moved from the column to the console. Various gauges, including Boost, the tachometer, and water and oil temperature gauges, are all placed somewhere very out of place for a Rolls-Royce.

This Beast of a car still runs and is daily driven by the same man that bought this car in 2004. The engine swap ended up costing less than the V12 repairs, so he definitely made the right move on this one.

Collision Rescue: This 1970s Film Shows How Awesome And Handy The Hurst Jaws of Life Were and Are! Small Tire Monster Truck Video: Back In 1991 The Bigfoot Crew Bolted 48-Inch Tires On As An Experiment - Interesting

4 thoughts on “Video: Ripping Around Tokyo In A 700hp 2JZ Swapped Rolls Royce Phantom – This Is Beyond Awesome!”