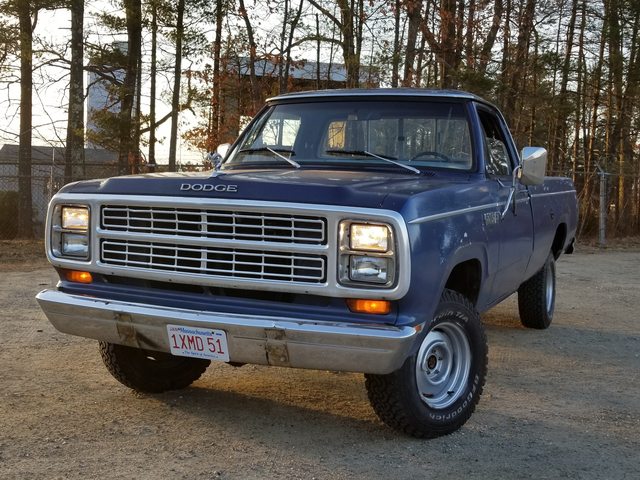 Welcome back to our coverage of Project Power Laggin’! Follow along as we take a tired 1979 Dodge W150 Power Wagon we found in Central Maine and transform it from a derelict roadside attraction to a dependable, powerful weekend workhorse that lives up to it’s given name! In this installment, we’ll attempt to fix some of the laughably bad things we found wrong with the truck.

When we last took a look at ol’ Power Laggin, we immediately discovered that living in the Maine countryside for forty years did a number on the truck. There were lots of haphazardly performed “repairs” that needed to be fixed the right way in order for the truck to be solid and dependable before we address the “Laggin'” part of the equation. There were A LOT of things that needed to be sorted before it could go down the road without getting stranded, and we found out about a few of those the hard way! Where to begin… 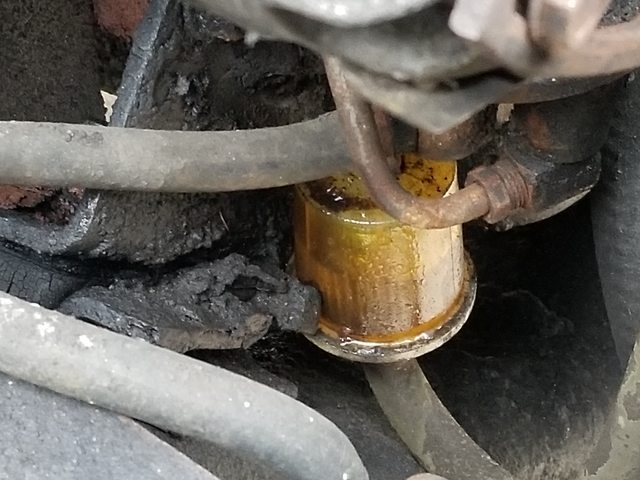 Ok, let’s start with this! The truck was leaking fuel from the ancient plastic fuel filter, which we noticed when it was on the lift. Since we want to avoid it burning to the ground before we can have fun with it, this was a top priority. 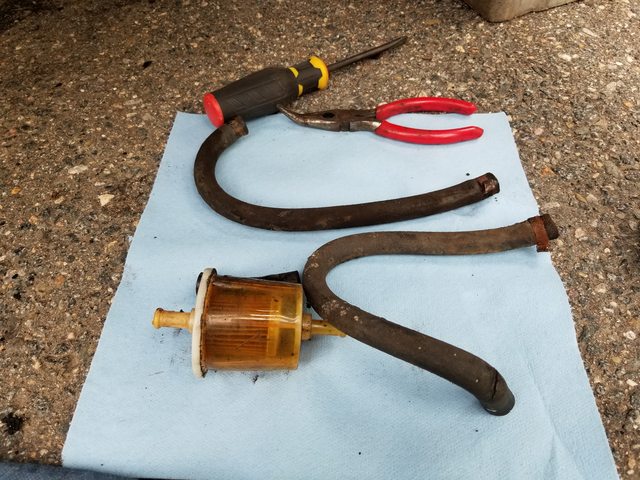 The filter and lines probably haven’t been looked at since Huey Lewis & The News had a top ten hit, so all of that came off the truck to be replaced with fresh stuff. 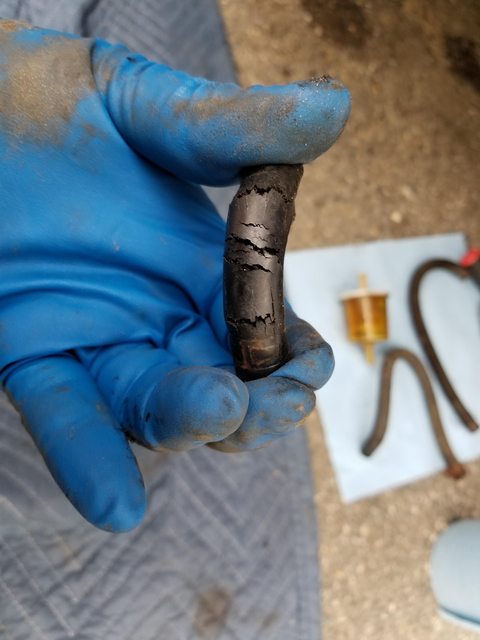 All of the lines were split to bits like this chunk you see here. It’s always a good idea to look at this stuff as soon as you bring any project vehicle home! 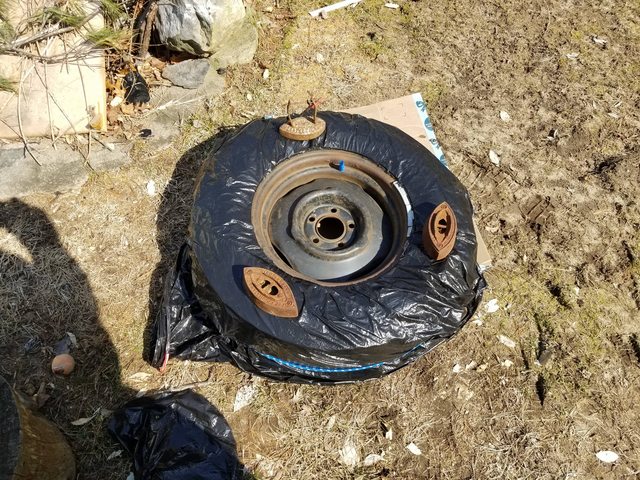 While the truck was up in the air for the fuel filter repair, I knocked out a quick side project: painting the one non-silver wheel. This was driving me insane every time I looked at the truck, so I had to do something. I masked it off with a trash bag and raided the paint shelf in the garage for something that sorta matched the other three wheels. 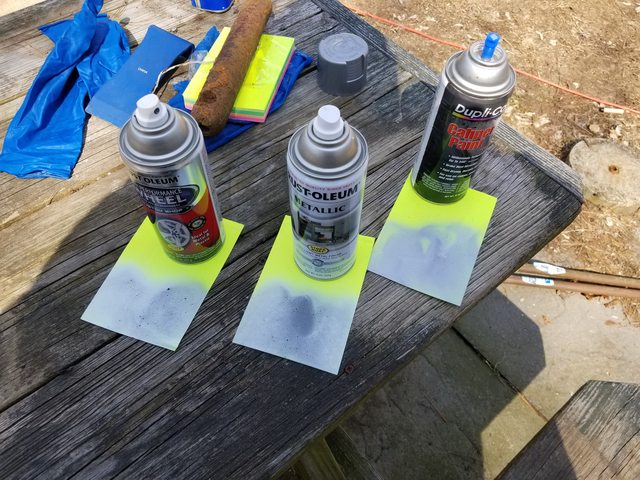 After testing the three different silver cans of paint I found laying around, I chose the caliper paint on the right as the winner. Nothing but the best! 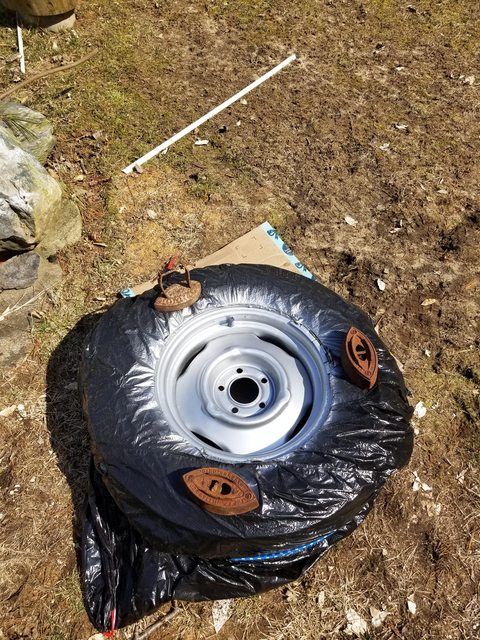 A few coats of paint on the wheel made a world of difference. 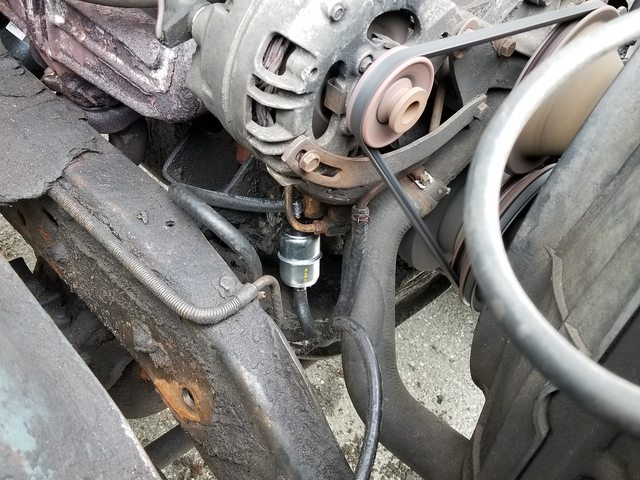 With the new filter in place, the truck seemed to run better than ever! I decided to take it for a ride down the street to test it out. 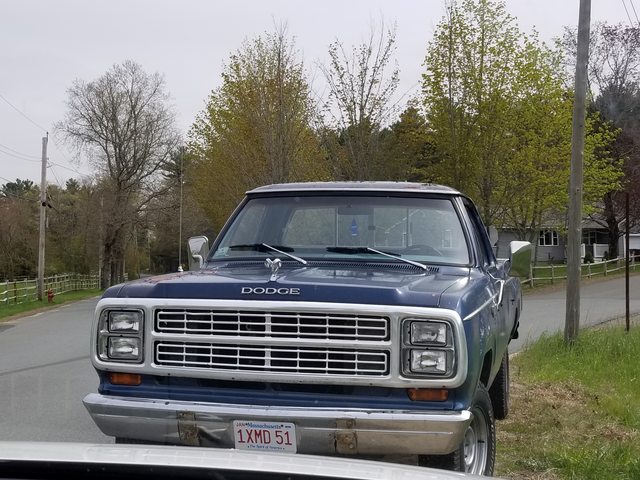 Cue The Price Is Right “You Lose” horn. That ride lasted about a minute tops. The truck just shut off, and it wouldn’t even turn over. “But you just changed a fuel filter!” you are probably saying to yourself. Well, the fuel filter had zero to do with it. After calling a friend, we dragged it back home to figure out what happened. 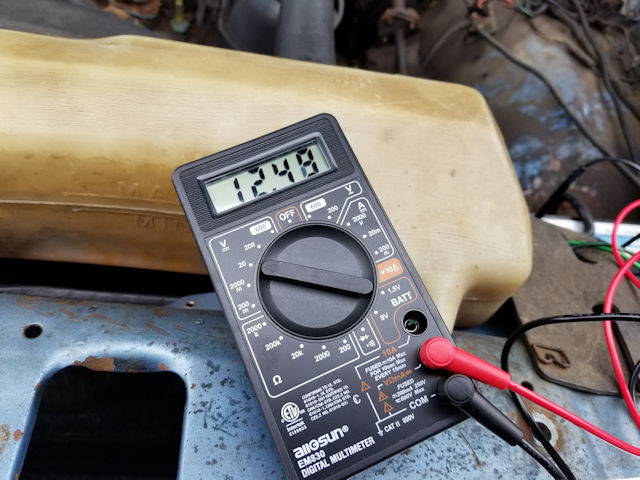 Turns out, by sheer coincidence, the battery died. If you remember the last installment, there was some VERY questionable alternator wiring, so I looked there first. After repairing that the right way and charging the battery, it didn’t seem to be charging. A trip to the parts store and a quick bench test confirmed that the alternator was toast. Time to revamp the charging system. 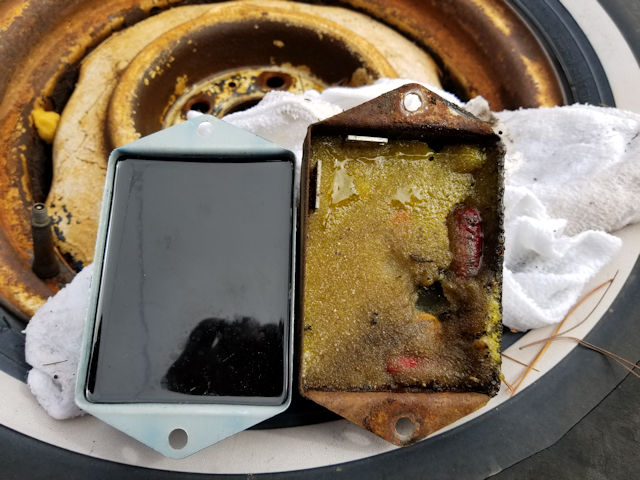 In addition to the alternator troubles, I noticed during our last installment that the ignition box was leaking out it’s potting material. I decided now would be a good time to replace that as well. As you can see, the old one was SMOKED! 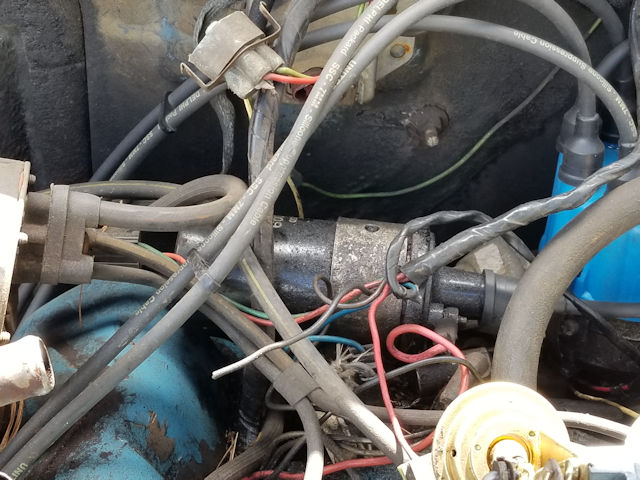 As you can probably tell now, “project creep” was starting to set in. I decided to replace just about everything related to the charging and ignition systems, including the original 40 year old Mopar coil that had been marinating in its own filth for far too long. 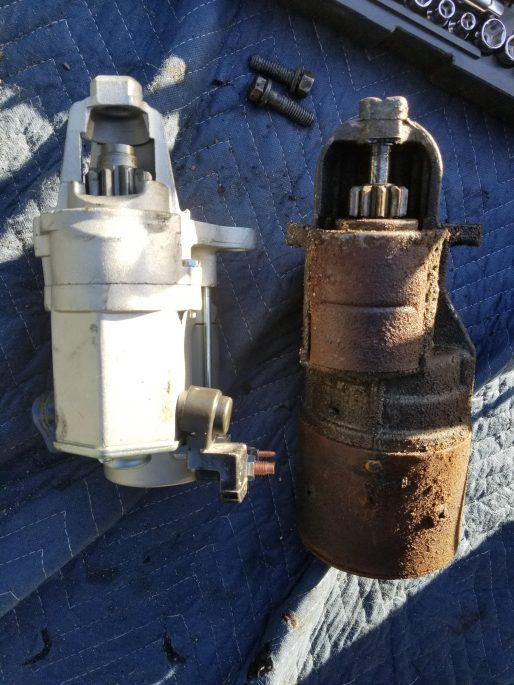 Another thing that was on my list to do was swap the old starter for a newer Magnum-style starter. The later Magnum 318/360’s came with a smaller and more reliable high torque mini-starter, and it’s a direct swap for the massive ones that came on older vehicles. No modifications are needed, making this a no-brainer. 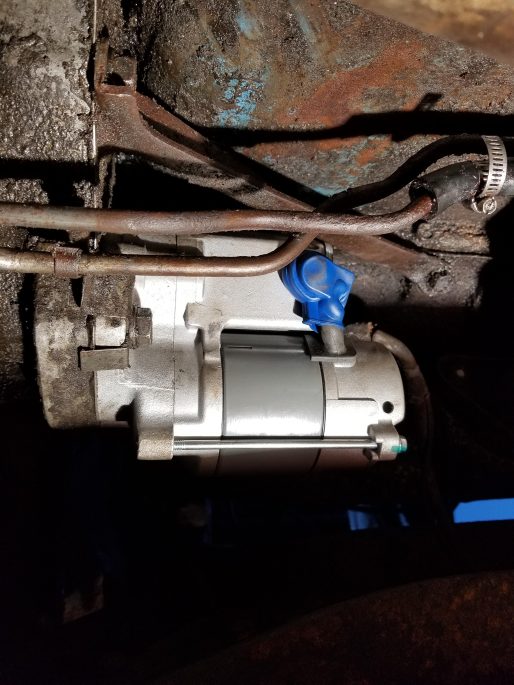 As you can see, it just bolts right up. Even the factory wiring can be retained. 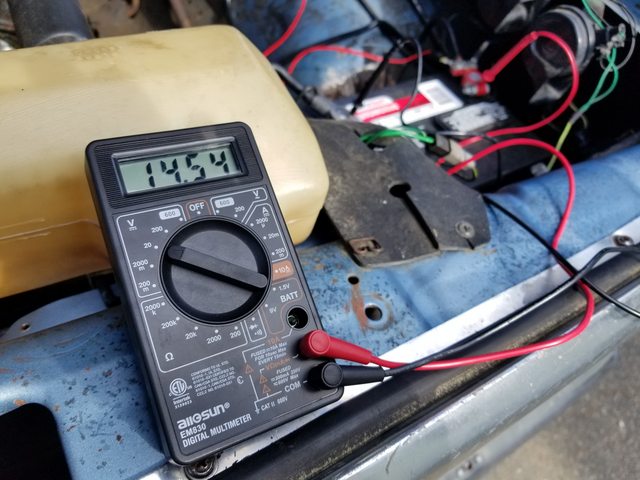 That’s better! After replacing the alternator, voltage regulator, starter, and more, things were as they should be, and the truck would start with a touch of the ignition cylinder. 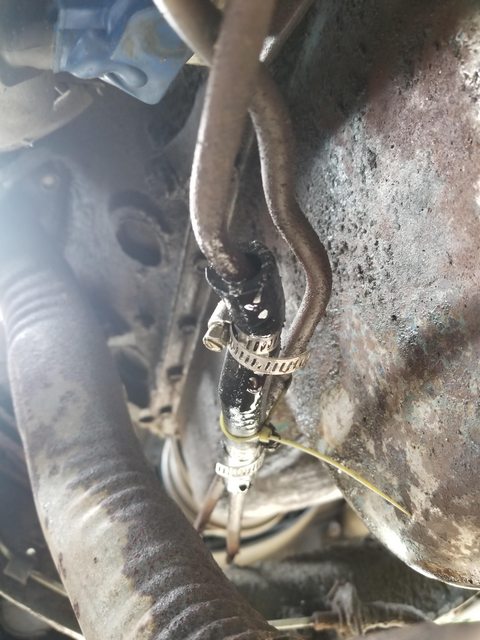 With everything working again and the truck starting AND charging reliably, I could go back and focus on some other things, like the fact that everything on this rig is leaking like the Exxon-Valdez. At some point, the Wire Nut Bandit (that’s what we are calling the previous owner now) decided to install a transmission cooler. During that process, he broke the transmission lines and tossed on this random hose to “fix it gud”. As you can see, it’s the wrong diameter hose. No amount of hose clamps and zip ties was going to fix that, so I replaced the hose with the right stuff. 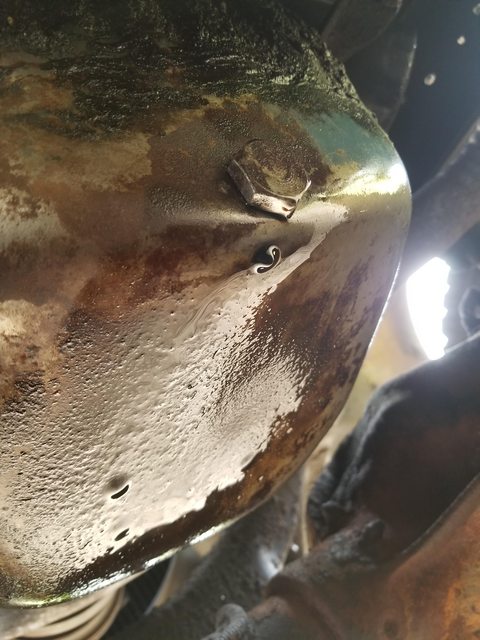 It was also leaking oil from a few places, including the drain bolt. Notice something missing here? 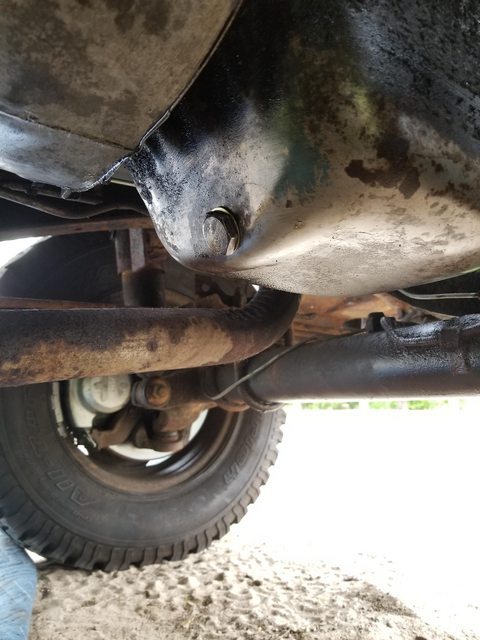 If you guessed it’s because the plug gasket was missing, I owe you one Internet High Five. With that replaced (and the oil changed with fresh stuff), one of the largest leaks was gone. It still needs an oil pan gasket, but we’ll kick that can down the road for now. 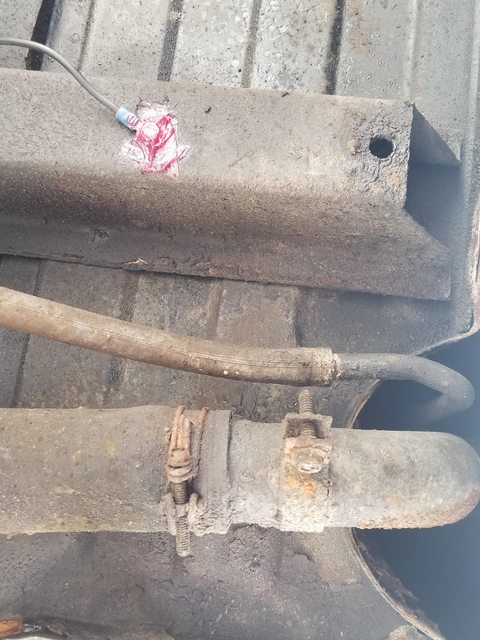 Speaking of things leaking, after taking it to the gas station after the ignition and charging system was fixed, it decided to dump fuel all over the place from one of the hoses. Not only that, but the fuel gauge was showing empty, even after we fixed the ground wire and slathered it with dielectric grease. Further investigation was about to get scary. Notice something missing on that vent hose? 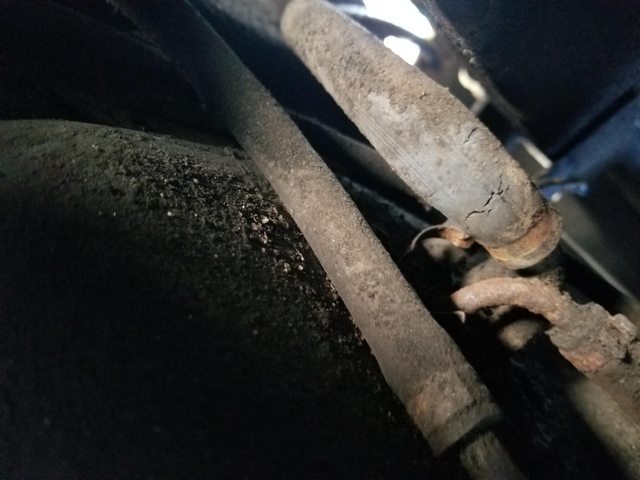 Pardon the terrible photo, but this is the top of the fuel sender. As you can see, it was a cracked hose bonanza, causing things to leak and vent incorrectly. Also, there were more clamps missing! All of that was going to have to be replaced. Man, this truck really wants to self-immolate! This is a good time to mention that having a fire extinguisher on board is a great idea for project vehicles and daily drivers alike. You never know when you’ll need one. 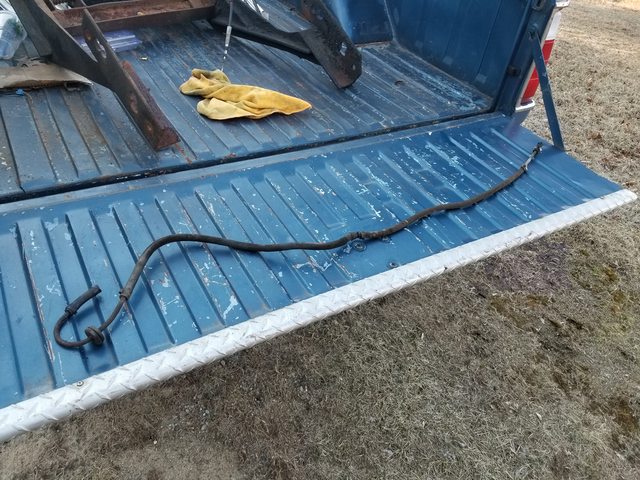 This giant rubber and metal splice-fest was the feed line from the tank to the metal line on the frame. If you recall our last installment, I found a sticker on the door that talked about an auxiliary tank being installed sometime after it was built. That tank is long gone, but whoever removed it just spliced the remnants of the double tank feed line together and hooked it up to the main feed on the frame. There were clamps missing on many of the connections, causing fuel leaks and a dangerous situation. All of this was replaced with a small hose about 1/3rd the length. After the lines were all replaced, there was still no reading on the gauge (we’ll tackle this in a later installment), but the leaks were gone! 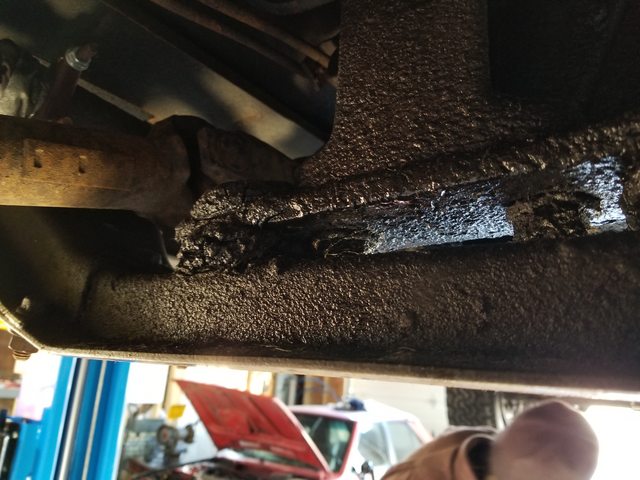 Remember these gross transmission mounts from the last installment? With the Laggin’ leaking a lot less, these were next on the list for replacement. 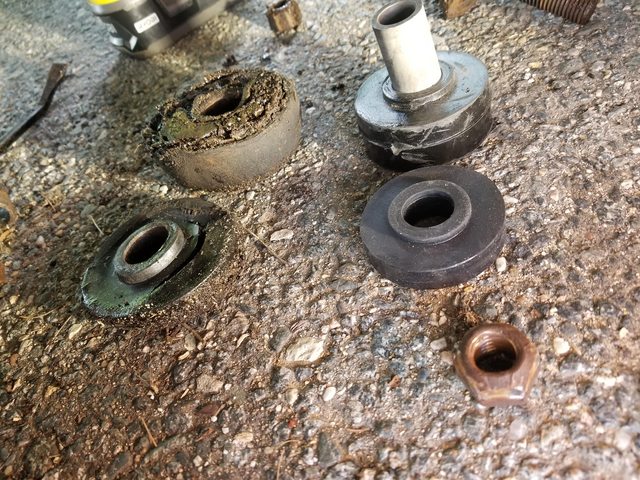 The mounts on these are as simple as can be. You have a rubber sandwich with a metal sleeve as the meat, and it’s held in by a nut and bolt. The old ones were swollen and cracked to oblivion. 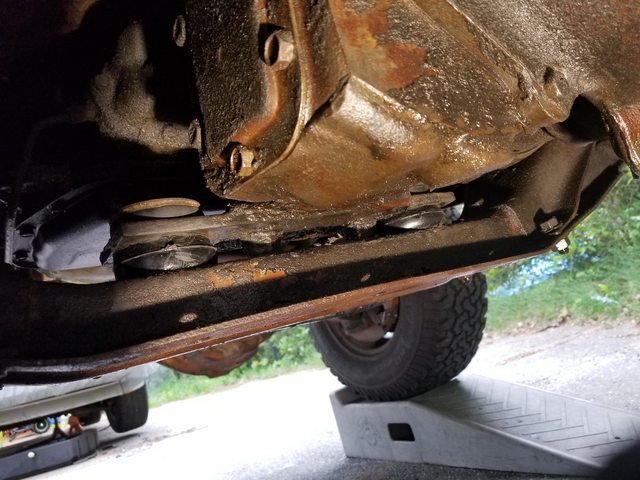 And done. While there’s still a bit of driveline clunk, there’s far less of it now! 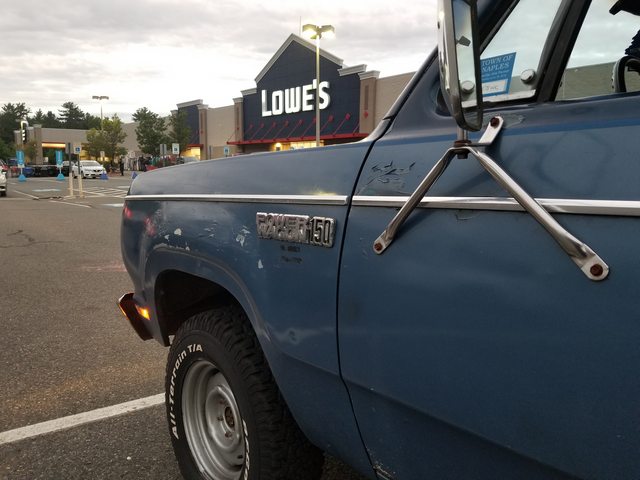 And with all that done, doing Power Laggy Truck Stuff could commence! It’s FAR from perfect, and still needs so much more, but it could now get you where you needed to go, albeit slowly.

Thus wraps up this installment of Project Power Laggin’. There’s still a lot more to do before the fun stuff, but we’re having fun along the way fixing all the dumb stuff. It’s really been a rewarding project so far. If you’re enjoying this so far, drop us a line below in the comments section!