BangShift PSA: Drifting A Front End Loader on Ice in Siberia Will Get Your Boss Fired [w/video] 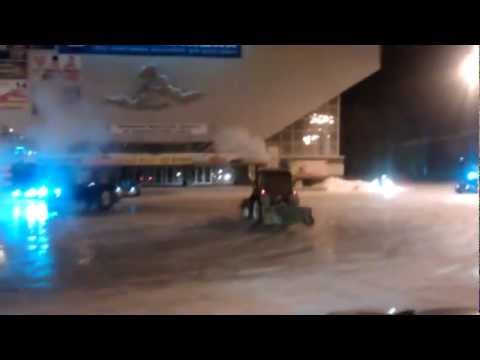 For decades when someone screwed up in Russia, they were sent to Siberia, a frozen hellish place that sucked your spirit and broke your will. The good news is that nothing seems to have changed in Siberia, where fun is still very much against the rules. Last week a pair of guys driving small front end loaders, set up for snow plowing were caught on someone’s cell phone camera drifting them around an icy parking lot. This led to the near immediate sacking of their boss and the tractor operators were, “disciplined and stripped of bonuses.” We’re guessing that they didn’t get their free bottle of Stolichnaya at the end of the week.

This all happened in front of the biggest arena in the bustling metropolis of Irkutsk, a place actually called, “Trud”. Seriously, is there a more Siberian sounding word than, “Trud”? It make us cold, sad, and depressed just saying it. “Fellas, I have tickets to the big game at Trud tonight!” See what we mean?!  Apparently Russia has a newspaper of the same name.

Anywho, it seems that the “municipal official” who was fired would not give up the names of the tractor operators. We’re guessing that’s what did him in. As noted above, the dudes were found out anyhow and got in trouble. Did the boss really think that his comrades were just going to give up that easy? Hello? This is the country that spawned the KGB. There were probably 50 Siberian detectives assigned to the “tractor drifting” unit to get the perps and bring them to justice.

So let this be a lesson to all of the budding Siberian “municipal officials” out there. Fun is bad. Fun will not be tolerated and drifting tractors can only take place in quiet private places, not on the hallowed grounds of Trud! (We just had to jam one more Trud in there….see we did it again.)

2 thoughts on “BangShift PSA: Drifting A Front End Loader on Ice in Siberia Will Get Your Boss Fired [w/video]”