BangShift Question Of The Day: When Did You Realize That Your Car Was Possessed? 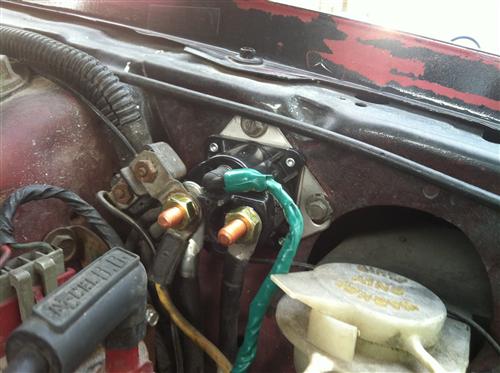 We all know that one scene in the movie “Christine”, where a dejected Arnie, alone with his prized Plymouth, is busy assessing the damage caused by hoodlums. He promises that he will restore the car again, better than before, and that’s when a small noise is heard from under the hood. Upon his inspection, the once-destroyed engine, complete with smashed-in carburetor cleaners, is spotless and new. In short order, the rest of the car follows suit: the smashed mirror’s glass returns, the stuffing is once more hidden in the seats, the bumpers have magically straightened themselves out and before you know it, Christine has returned in full glory, her Autumn Red paint radiating.

It’s a nice dream, but in the real world, having a car that’s possessed by an evil spirit is at best, a pain in the ass and at worst, a genuinely scary proposition. I had a 1973 Chevelle that loved to bitch about cold mornings by puking raw fuel out of the carb before backfiring and setting the engine bay ablaze…not enough to call the fire department, just enough to get the monkey steering the wheel to fly out of the car, unpin the fiberglass hood, and spend a half-minute putting out a small fire to the amusement of other motorists. My Honda Trail 70 would throw it’s chain if I attempted anything more than putting down a dirt path, regardless of how new the chain and tensioner were. But my winning moment? That’s an easy one: the stuck Ford starter solenoid.

Lets paint the picture: Wrenching on the car, and it’s time to hit the key. Engine spins but doesn’t fire. Try it again, engine spins but does not want to light off. Fuel has been checked, air is available and it’s the middle of locating the missing spark. Replace the coil, hit the key, engine spins…and keeps spinning. You turn the key off, engine still spinning. You pull the key out of the column, engine STILL spinning. Now what, big boy? It’s time to disconnect the battery on a car that is actively pulling a good amount of power from the battery itself. And that is not something to take lightly. It was one thing to come to grips knowing that your command to quit attempting to start was met with the most resounding “Eff you!” a car could ever communicate, but now you’ve got the serious task of not getting the holy hell shocked out of you. Once you do get the battery unhooked, the fix is simple enough, you just get a new solenoid and move on like normal. But until you get the battery unhooked and get the starter to quiet down, your blood pressure will be climbing right along with the oil pressure. That old Ford might not be Christine, but that doesn’t mean that it isn’t a cantankerous old son of a bitch either.

Some lessons you don’t want to learn the hard way, some you just have to. I’ve learned that I don’t want to know much about a car’s personality when half of it is more malicious than a recently dumped ex. Have you ever had a possessed car? How did you know?

Drag Action Gallery: More Sportsman and Straight Axle Madness At Historic Thornhill Dragway! 2018 Syracuse Nationals Photo Coverage: The Cool Cars And Trucks Of The Northeast Were All There

3 thoughts on “BangShift Question Of The Day: When Did You Realize That Your Car Was Possessed?”