Big Daddy Scores the First Drag Pak Challenger, and Will Race It!

Dec 09, 2008Brian LohnesBangShift NewsComments Off on Big Daddy Scores the First Drag Pak Challenger, and Will Race It! 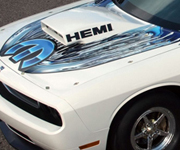 Thank the Gods of Speed, there is a piece of good news to report! First that the Challenger Drag Pak cars are starting to be delivered to owners and that Big Daddy Don Garlits will own the first one.

The even better news? He’s actually going to go racing with it in NHRA Division 2 action. We’re not sure what category he’s going to be running in, but if you are a Stock or Super Stock racer in Division 2, you have the very real chance to actually race Don Garlits. If that doesn’t keep you up at night, quit now.

Here’s the release from Mopar:

SpeedFreaks host Kenny Sargent will emcee the event, with remarks by Steve Shugg, Director of Sales and Marketing, Mopar. Garlits will receive the certificate commemorating Dodge Challenger Drag Pak Vehicle No. 001. The Mopar drag racing icon will have his new Drag Pak Vehicle on display near the Mopar Stage along with famed package cars from Mopar’s past, including Dick Landy’s 1964 Dodge Dart and a 1964 lightweight Dodge. Garlits’ Drag Pak Vehicle was delivered straight from the factory to the PRI show, offering prospective Drag Pak owners a glimpse of how the car will look upon delivery.

Garlits piloted one of two Dodge Challenger Drag Pak prototypes (Judy Lilly steered the other) at the 29th Annual Mopar Mile-High NHRA Nationals in July. The factory-developed vehicle kit is based on the 2008 Dodge Challenger SRT8® and features a weight reduction of 1,000 pounds. Unique additional components include a lift-off hood with functional scoop, Viper-style front seats, polycarbonate door windows and more. Special engine packages based on the 5.7-liter HEMI®, 6.1-liter HEMI and 5.9-liter Magnum® Wedge are offered for the Dodge Challenger Drag Pak Vehicle, which will be eligible to run in popular categories (Stock, Super Stock and Comp Eliminator) and potentially 40 classes in NHRA/IHRA competition.

This will be “Big Daddy’s” third Mopar package car. He received one of the first thirteen 1962 Dodge Max Wedge Drag Cars, and raced a 1963 lightweight Dodge 426 Max Wedge car.

“It’s an honor to get the very first Mopar Dodge Challenger Drag Pak,” said Garlits, who has claimed 17 world championships and 144 national event wins during his storied racing career. “I am going to have fun competing in a car my wife will actually let me drive. I’m not allowed to drive a Top Fuel dragster any more. She said to me after my last 310 mph run at Indy in 2003, ‘I would appreciate it if you wouldn’t do this any more,’ and I knew I had better comply because I didn’t want to come home and find all my stuff piled on the front lawn.”

Garlits plans to race his Dodge Challenger Drag Pak Vehicle in NHRA Division 2 and is aiming to make it to the U.S. Nationals in 2009 to commemorate his sixtieth year in drag racing.