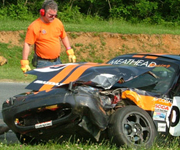 Most racing fans (myself included) like to complain about the seemingly endless creep of “spec” cars into the upper echelon of just about every racing series on Earth. It’s the Car of Tomorrow, or the strangling rules on Top Fuel and Funny Car racers, and recently the announcement that even Formula One–the greatest bastion of R&D money in motorsports–may look into spec engines and chassis in the near future. It’s all saddening because as guys and girls who love innovation and creativity, we feel that those two elements are being choked out of racing–and make no mistake about it, they are.

The first is the SCCA class Spec Miata. Now, before you string me up and throw rocks at me, I am not a fan of Mazda Miatas on the street, nor would I ever own one for the purpose of driving around for fun. I would, however, own a Spec Miata race car.

During my days of announcing SCCA road races I would always look forward to watching these little cars do battle. Why? Mainly because they are slow and the field is mechanically uniform, right down to the lug nuts. This creates some amazing drama on the race track because the vast majority of the competitors have a ton of zeal, but no actual skill. That equation equals spectator gold.

Races would go in a fairly formulaic fashion. Within two laps, the talented racers in the field (who were all qualified at the head of the pack to start) would distance themselves from the main group of cars. The battles for the lead would be epic as it really became a chess match between drivers and how they planned on using their car. Some of the guys would try to bonzai their way to an early lead while others would save the car, brakes, and tires for the last couple and sprint to the win. There’d be lots of passing among the first three or four cars as they fought for position. Up there it was normally high-quality racing by guys who really knew what they were doing. Like I stated previously, it was chess.

The rest of the guys were playing bumper pool. At the same point that the guys who knew what they were doing diced it up in front, guys who were getting angry, desperate, or perhaps both were plotting revenge on the guy that had been blocking them the whole race or who they thought wronged them at some point. The road race would turn into a virtual dirt track “Saturday Night Thunder” deal with guys nerfing each other off into the grass, others making insane dives to the bottom of corners, forgoing the logic that there were other cars to their left or right, which they then crashed into. In the finest moment I can recall, a scrum of three or four cars actually crossed the finish line entangled with each other with the majority facing a direction other than straight ahead.

Inevitably, these races would end and the race control people would pull all the drivers into a meeting and read them the riot act about manners, proper driving, etc. Everyone would nod their head, lick their wounds, and promptly forget whatever the hell the guy in the white shirt and pants told them.

These were spec cars and they were brilliant to watch and announce. The only thing different about the machinery was the meat in the seat.

The second such example I can give is the recently completed VW Jetta TDI Cup. All the races were aired on the SPEED channel and if you missed them or flipped past because there were (admittedly) weenie VW Jettas racing around, you missed awesome racing and comedy gold.

Take all the elements of the Spec Miata class and add to the mix 30 young, aspiring race drivers with no professional experience, television exposure, and a $100,000 dollar championship prize. It’s the best thing on television, especially if you like wrecking Volkswagens. Every race had its share of big carnage as testosterone, lack of experience, and ego blinded drivers into making bad passing decisions and braking decisions, ultimately leading to many multi-car pileups.

Sure these things were tuned up a little and had some suspension work done, but they were still pretty slow cars in comparison to most everything else in the racing world. To say that I’d choose to watch it over professional drag racing is saying something because my blood has a small percentage of nitromethane in it.

The series has finished for the year, but knowing that SPEED has a dearth of programming in the winter, they are bound to rerun these races, and they are only half-hour shows, so you don’t need to waste an entire afternoon on it. They’re spec cars and they are massively entertaining.

The moral of the story here? Keep your eyes and mind open about your automotive taste. There’s neat stuff hiding around every corner. The beauty of being an unbiased gearhead is that you’re never going to lack for entertainment.

Now, if you’ll excuse me, I’m going to go clip some apexes in my pickup truck.

Big Daddy Scores the First Drag Pak Challenger, and Will Race It! Get a Galpin Mustang GT for Dirt Cheap