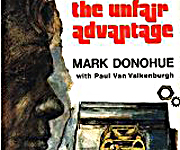 Mark Donohue had one of the most spectacular careers in the history of American race car drivers. He drove everything, literally: NASCAR, Formula One, Trans Am, Indy cars, IROC…hell he probably raced pedal cars as a kid.

His success was the marriage of several factors. One was his brilliance as an engineer and ability to understand how cars work on the race track. Another was his nearly career-long car owner Roger Penske, the greatest race team owner this side of Enzo Ferrari, who always made sure that Donohue was supplied with the best equipment. Third was the fact that the man could just drive the wheels off of whatever he was sitting in.

Donohue worked putting together the book The Unfair Advantage in 1974 while taking a year off of racing. In it he goes into great detail abut the various programs he had been involved with and how they because so successful.

We’re not going to give away any secrets here when we tell you that the only “unfair advantage” Donohue and crew had was their intelligence, work ethic, and humility. As you will see in the book, Mark Donohue does not come off as the dashing, world champ race driver. He comes off as a guy who’s never satisfied with how good things are and always looking for ways to make them better.

If you want to read the greatest tales from the greatest era of racing in this country, and probably in the world, you need this book. Once you start it you won’t be stopping, so take that into consideration. It’s also sad to realize that within a year of this book being published in 1974, Donohue would be dead, the result of a wreck in a practice session at the Austrian GP. He emerged from the car seemingly fine, but with a headache. The headache got worse through the night and he died at the hospital of a brain hemorrhage the next day.

If you are a student of history or just want to be an educated fan, this book is a must own.