This 1990 Dodge Daytona Will Shut Down A The K-Daytona Cracks With A Late-Model Hemi, Six Speed, RWD Soundtrack. 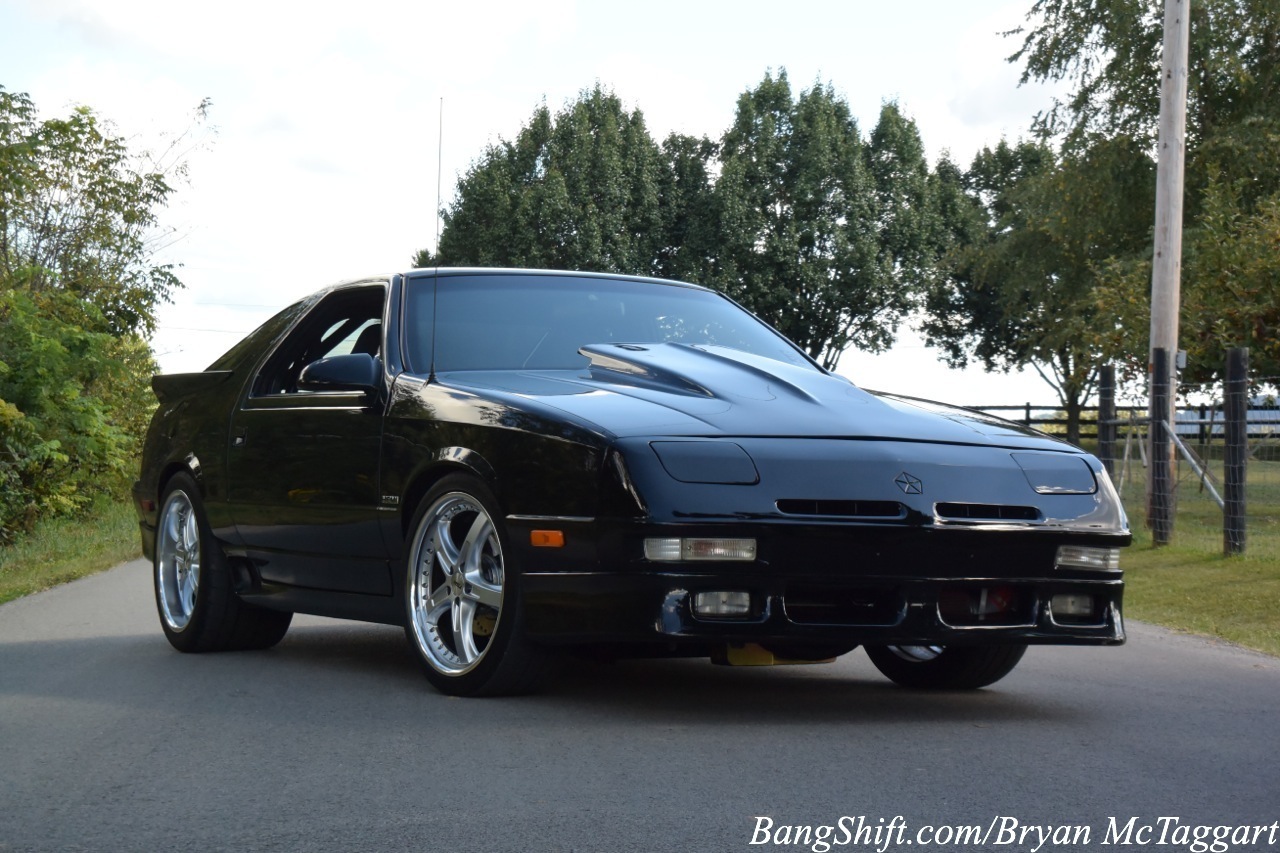 Regardless of whether or not they saved Chrysler Corporation’s ass in the Eighties, regardless of whether or not they made decent transportation, there is a cultural aversion to anything rooted to the Chrysler K-platform and it’s many variants. They were cheap. They were underpowered. They were dorky. You might get away with that over an Aries or Reliant, but by 1984 Chrysler had shaken off the major hangover that was the Seventies and had gotten their shit together quick, fast and in a hurry, with Lee Iacocca cracking whips and barking orders. The minivans were selling faster than they could be made. New Yorkers and E-Class sedans were rolling out the doors well, and Chrysler started feeling kind of ballsy. So they took a K-platform Aries, gave it an extended K-frame front end and changed everything they could so it wouldn’t look anything like the lowly little cracker box and created the Dodge Daytona. Dodge was going for the handling end of the performance equation, and had targeted the Porsche 944. During testing at Chelsea Proving Grounds, legend has it that two 944’s were balled up during testing and that Body and Chassis Engineering would have to pay if another Porsche ended up looking like a discarded Coke can. Motor Trend ran a comparison drive of an ’84 Daytona Turbo Z against a ’83 Camaro Z28 and a ’83 Mustang GT and found that the Daytona was on par with the two established musclecars. 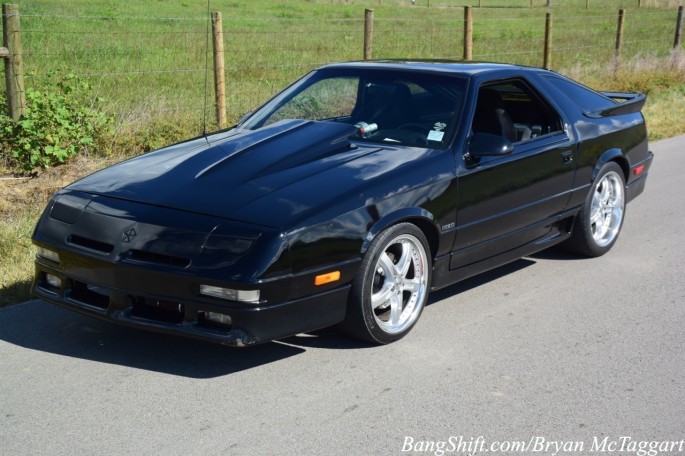 But the problem that remained was the stigma that it was a front-wheel-drive four-banger. Even though Shelby worked his magic on the motors, even though the IROC racing series went to Daytonas after ditching Camaros, and even though the Daytona R/T could come with a 224hp V6 by the early 1990s, they never enjoyed the same successes that the F-cars and the Mustang got. Nowadays, seeing any Daytona is a fairly rare sight. Even more rare: seeing a Daytona that stands a great chance of whipping up on pretty much whatever you brought to the challenge. And rarest of all: seeing that same Daytona using the back wheels to do it with. Mopar Performance offered a RWD swap kit in the late 1980s and early 1990s, sure, but it was expensive, hard-to-find, and didn’t have a real answer for what to do for rear suspension. That particular kit has been out of production for at least twenty years as well, so unless you locate one, you’re out of luck. 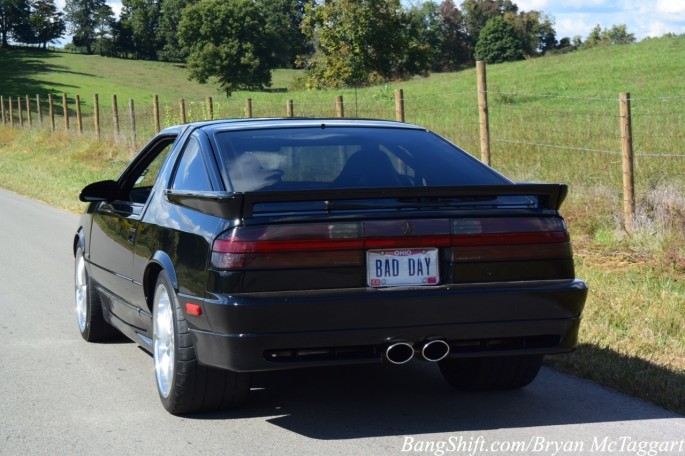 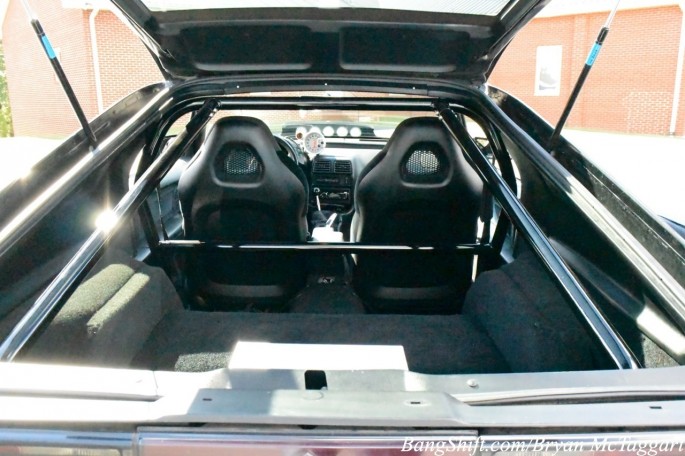 This is where Mark Beckett of Proctorville, Ohio found himself. He had a 1990 Daytona ES with a built-up turbo motor, but had decided that he wanted more out of his car. Instead of going with the typical small-block LA swap or the “ten pounds in a five-pound bag” idea of shoving a big block into his car, he decided that the late-model 5.7 Hemi would be a good candidate. Before work began, he weighed the G-body Dodge and determined the weight distribution, and used those numbers as goals. Since the Mopar Performance kit was LA-based, even if he found one, it wouldn’t work out, so he instead chose to build his own tubular K-frame, using stock mounting points for steering, struts, and control arms. In the rear, a custom rear subframe with wheelwell tubs were designed and installed, then tied to the front subframe, as well as an added roll bar inside. A triangulated four-link system was fabricated and attached to a Chrysler 8 3/4 rear that is packing 3.91 gears and a Sure-Grip.  Factory-style struts and springs are used on both ends, making parts sourcing easier. Disc brakes on all four corners are worked using a Mustang Cobra hydroboost system. 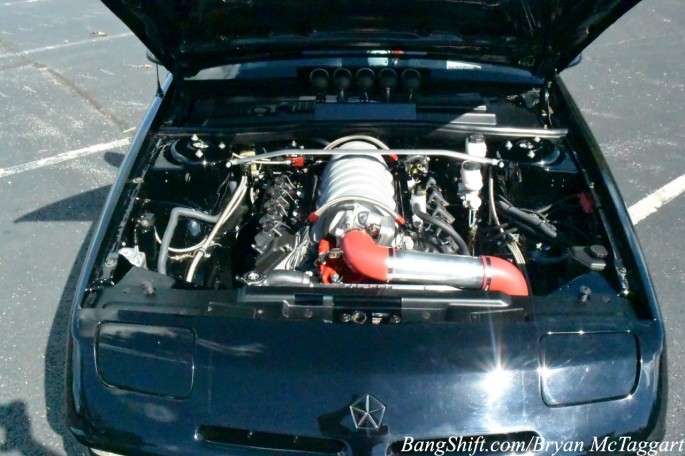 Under the hood lies the 5.7 Hemi, complete with a Hughes cam, ported heads and billet fuel rails. An Aeromotive A1000 fuel system feeds fuels to the injectors, and the motor breathes through a 6.1 Hemi’s intake manifold and out of BBK headers meant for an LX car. A Tremec TR6060 from a Dodge Viper handles the power with an aluminum flywheel and a StreetSlayer clutch inside of the Quicktime bell housing, and sends power to the rear with a custom aluminum driveshaft. The battery was moved to the rear of the cargo compartment for weight distribution. The Daytona sits on TSW wheels, measuring 18×8 up front and 18×13 out back, with 225/40-18 tires up front and Viper-esque 335-30-18 rollers out back. 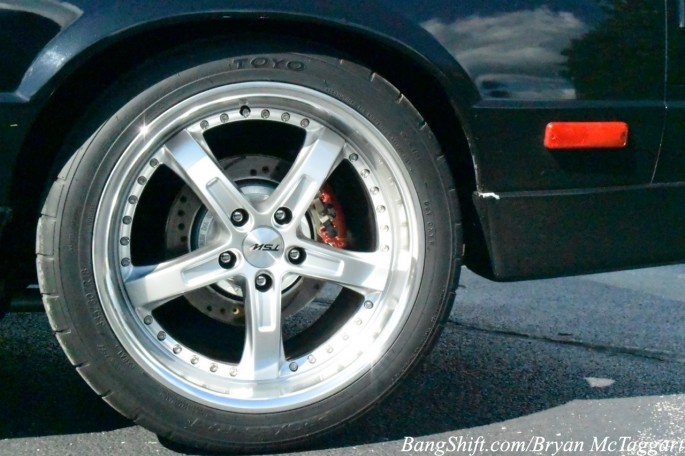 From the start of this project, Beckett wanted the Daytona to be absolutely useable. With that in mind, the full Daytona interior was retained except for the back seats and feels exactly as it should. The only major modifications the car required was a notching in the transmission tunnel to clear the 6060, which also required a slight reshaping of the heater box and heater core. None of these modifications make their presence known unless they are pointed out. Visually, the Daytona is fairly sedate, with paint that looks a little rough (it’s getting painted soon), a hoodscoop that is only being used to shield a bevy of Auto Meter gauges and the twin pipes sticking out underneath the rear license plate through a custom trim of the bumper cover the only giveaways that something wicked has just rolled up. The small “Hemi” badges from a late-model Charger on the front fenders are a nice touch. The stance is on-par with a stock Daytona, not nose-up like some other RWD converts we have seen. At idle, there’s just a hint of V8 burble out of the Borla exhaust, and at cruise the car is extremely livable. Even with the gears, in fifth and sixth the car lopes along quietly with the air conditioning blowing, quiet enough to talk even with the windows open. 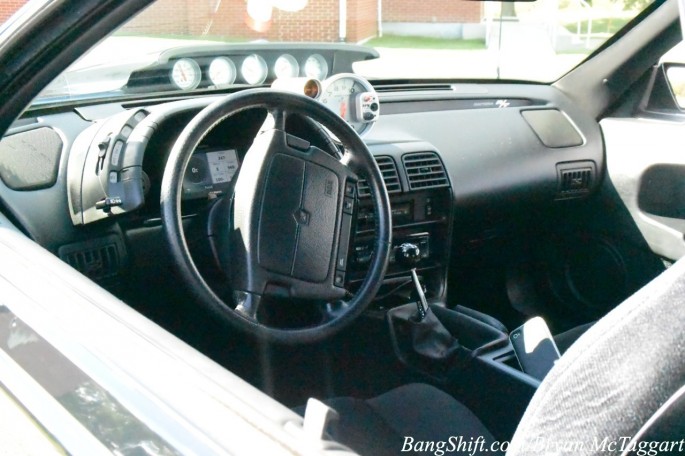 All of that, however, can change in an instant. Poke at the 5.7 with your right foot and you will be rewarded with ferocity worthy of the name Hemi. This car will shove you into the seat with a right f*king now intensity while screaming a snotty bass note meant to frighten the elderly and children. It’ll make short work out of whatever road you put it on. Considering how impressive the engine is in a new Challenger, just imagine ditching a half-ton of weight off of the car…the motor hits with the force of all of those legendary old-style Hemis I keep hearing about, and the car might be scratching 3,200 lbs. weight at the worst. I honestly believe that Beckett could go screw with the heads of new Corvette Stingray owners if he so desired, especially since the Daytona doesn’t feel nose-heavy or light in the back. It feels planted, with a firm but not brutal ride, and only the right foot being the difference between motion and tire smoke. And as we were discussing all of these traits, that’s when he started confessing:

1. The car is not in tune. It’s on a “run and drive” tune…it has not been optimized at all, and there is probably a lot still on the table. You could’ve fooled me.

2. He is planning on building a twin Daytona using a 545RFE 5-speed automatic instead of a six-speed, and

3. The black car you see here will be gaining a power adder sometime soon. He hasn’t committed to a choice yet, but both turbos and a supercharger have been looked at. 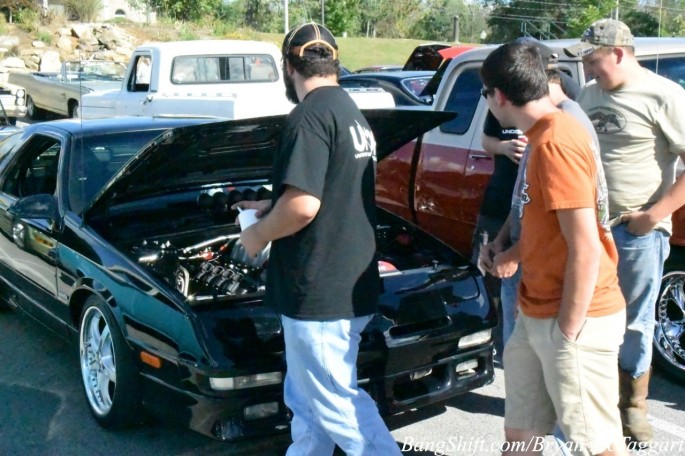 When the car you built is so badass that you have to do it again, you’ve got a winner. The crowds and reactions to this car cruising around Somerset were amazing, with people breaking their necks and chasing the car up the street to get a good look at the thing that should not be. It’s smaller than a Fox body Mustang and has all of the positive things to remember about the Daytona (the looks, the interior) with all of the issues rectified (V8 and RWD, baby!) It isn’t the first RWD K-Daytona out there, but it’s a new spin on it, and it is executed brilliantly. 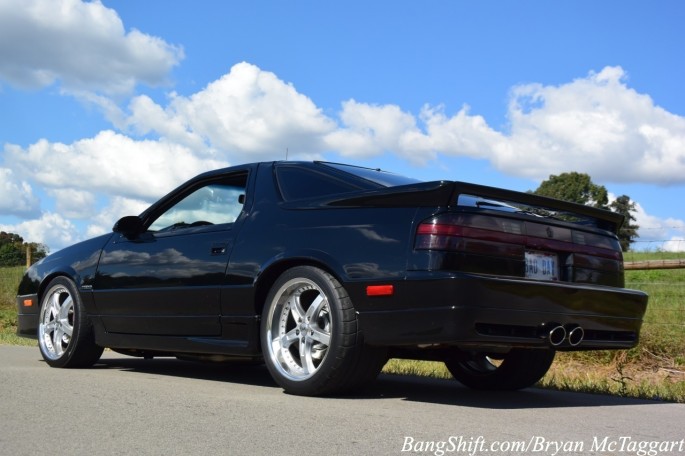 Holley EFI Makes Strong Showing On Drag Week - The EFI Revolution Hits The Toughest Street Car Test In The World Event Gallery: Somernights Cruise, September 2014: If It's Fall, They Don't Know It Yet

24 thoughts on “This 1990 Dodge Daytona Will Shut Down A The K-Daytona Cracks With A Late-Model Hemi, Six Speed, RWD Soundtrack.”