BangShift Test Drive: 2015 Mercedes-AMG GLA 45- What Is This Little Thing?! 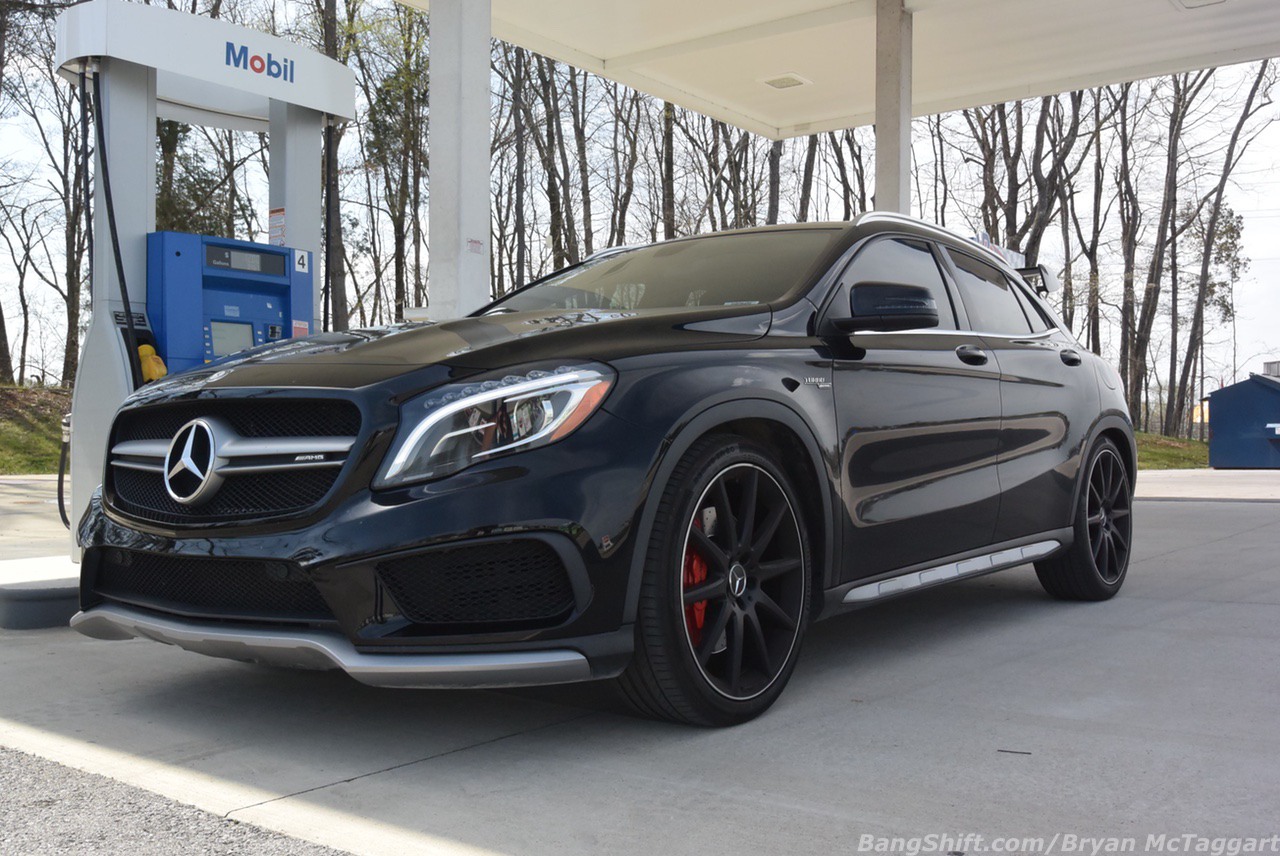 Full disclosure: I drove this car because (A) it was available, (B) I’ve never driven any kind of Mercedes-Benz product ever, and (C) I heard “AMG” and said yes before I heard the model nomenclature. “AMG Mercedes” conjures up images of 1980s bodykitted cars in 1990s rap videos, V8-powered monsters that seemed designed to both arouse and scare the hell out of Jeremy Clarkson specifically, and were the top-tier Mercs that you could get your hands on. Of course I’d say yes to all of that…every video that has an AMG Mercedes of late has an absolutely raunchy-sounding V8…I’d be in heaven. Worst to worst, I’d be rolling like I was in a Sir Mix-A-Lot video and that ain’t bad either.

Then I met the GLA 45. Seriously, what is this car? 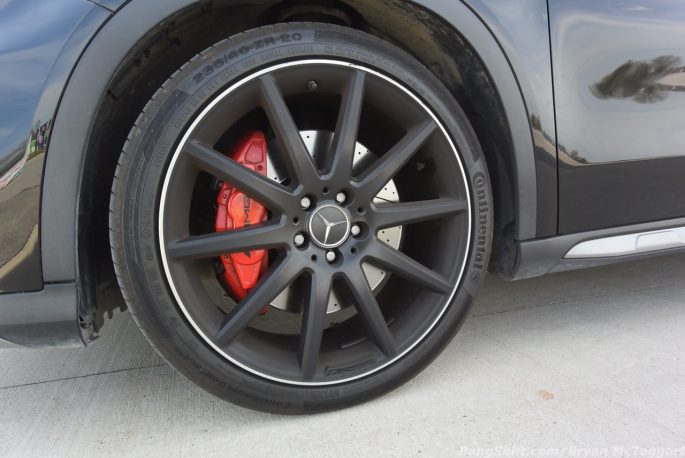 Ok, let’s get the first major impression out of the way right now: it looks like AMG got wind of the Ford Focus RS and decided that only one European-built all-wheel-drive hot hatch would do for the U.S. market. The overall layout seems to agree with my vision: 2.0L turbo four, 335 horsepower, 332 ft/lbs of torque, all wheel drive, curb weight around 3,500 pounds. Not a bad combination. The original MSRP would’ve been a tick under $50,000 dollars…not great, but the Focus RS isn’t too far under that figure. I won’t lie, I wasn’t quite as happy seeing the little rocket, but maybe a drive would help me to understand it better. 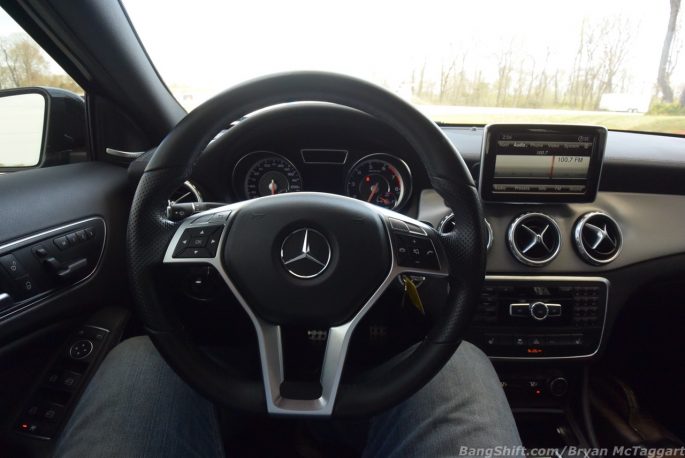 First impressions: Recaro seats are my new favorites. Gauges are clear and easy to see, dash is quite usable. Shifter is funky…kind of like the Kia Stinger GT, you switch between Reverse, Neutral and Drive with a toggle lever and you hit a button to find Park. Not a fan. Transmission has three modes: Eco, Sport and Manual, which lets the seven-speed dry dual clutch unit bend to your will. First bad note: that transmission sucks. The last time a trans took that long to respond to throttle input in my history, it was a bone-dry TH350 that leaked as fast as you filled it. Once it gets moving though, good starts to come back into the picture. The steering feel is go-kart like, the small footprint lets the car be very nimble, and when that turbocharger steps in, the Benz steps off. Get the car out of Eco mode into either Sport or Manual and the smooth, easy going type becomes more like that aggressive kid in P.E. with the red dodgeball in his hand. Mat the throttle, wait 1.5 seconds for the transmission to get the message, and the boost will pin you to the seat, every upshift announced by an awesomely rude noise from the exhaust. Cornering in this thing made me wish that nobody was at NCM…a flying lap in this Benz would’ve been a riot and a half. 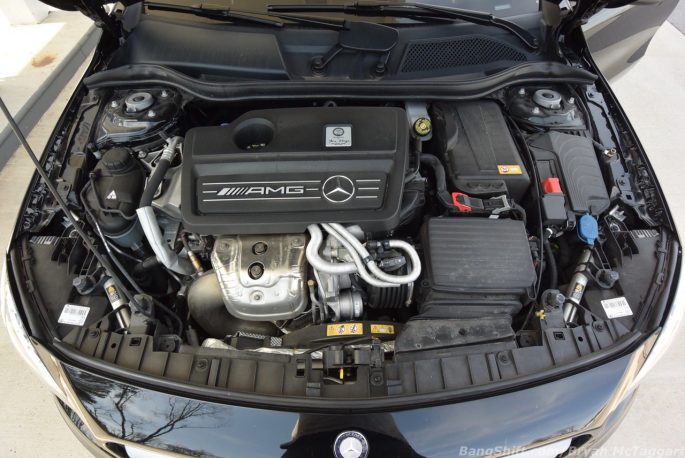 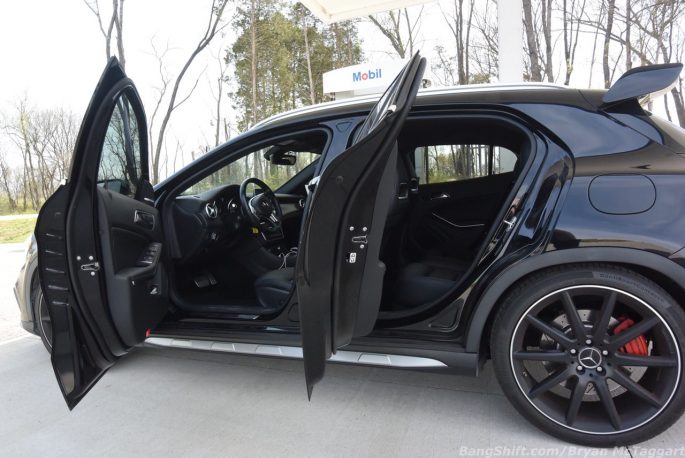 As I left NCM without playing (everything was already operating on-site with other ventures, so no hooning), I tried to come to grips with this car. I hate the way it looks…but that’s me, I’m not big on hatchbacks. I will say the interior is properly comfortable and those seats are the cat’s meow. When you have this little thing at 10/10ths, it’s a riot. It makes you appreciate rally rockets nicely. The letdowns, though, cut behind the knees on the good: that transmission sucks that badly. I’m not joking about the delay at all, it’s dramatic. And the Eco mode lets the transmission shift at will (way too early) and brings on the stop/start feature that needs to die in a fire. And did I mention the looks? Mercedes-Benz cars are supposed to keep some air of refinement about themselves. I think it’s the rear wing that is killing it for me. Am I being nitpicky? Maybe, but I can get a proper manual trans in a Focus RS, save ten grand thanks to the lack of the Three-Pointed Star in the grille, and still go out and have a ball on a track somewhere.

I’ll miss the exhaust note and the driving dynamics, but that transmission killed this AMG for me. Maybe next time. 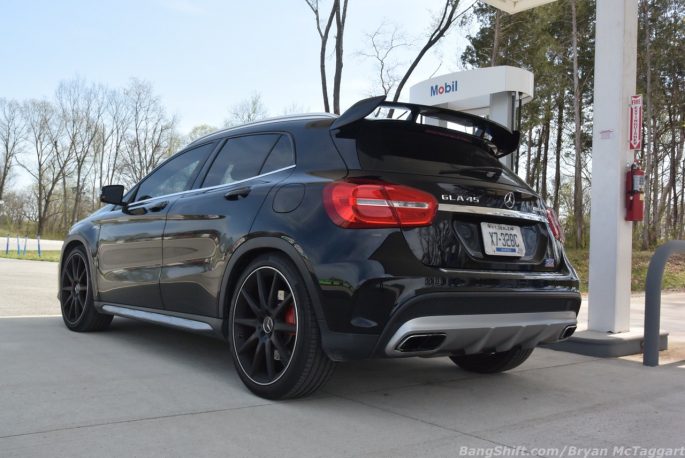 Adding LED Tail Lights To Your 73-87 Square Body GM Truck Is Super Easy Thanks To Brothers We Think Owning This House With A 23,000 Square Foot Garage Would Be Pretty Cool

One thought on “BangShift Test Drive: 2015 Mercedes-AMG GLA 45- What Is This Little Thing?!”