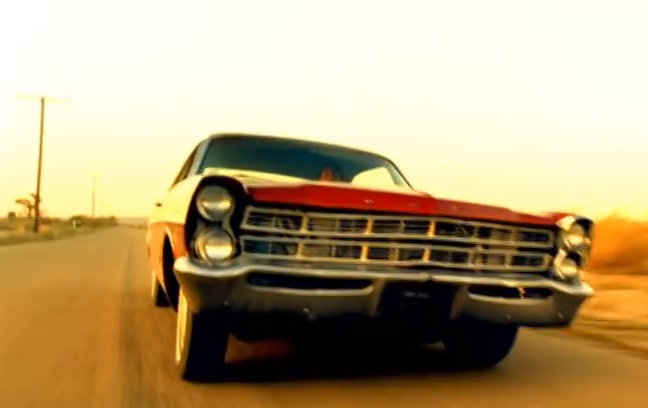 Rev Theory’s “Hell Yeah” isn’t a technical song. It isn’t a particularly original layout, it doesn’t have stand-out lyrics. It is just an all-around basic rock song, but it is one of the special ones that makes you want to drive like a bat out of hell with the secondaries howling and the pipes screaming. Considering how well they managed to feature the Southwest in the video for “Hell Yeah”, you’d swear that’s where the band was from, but that couldn’t be further from the truth: Rev Theory started out as Revelation Theory and came out of North Andover, Massachusetts. They appeared in 2005 and toured with bands such as Hinder, but it wasn’t until they changed their name and dropped their second album, 2007’s Light It Up that they burst onto the scene.

“Hell Yeah” has enough good references for any gearhead: a mid-sixties Pontiac, a mid-sixties Ford, the hot girl in the form of WWE wrestler Ashley Massaro, a car chase, and WWII-esque nose art (it’s late as I write this and I’m not 100% convinced that is a real piece.) Fans of the cars will cringe at the wierd-ass car chase mating dance ritual thing that is going on, but better to see them being used than as props in the background. To each their own there, but on the overall, if this song doesn’t make you want to go blasting down a road somewhere, I don’t know how to help you.

Ill Handling Beast Video: A Crazy Lister Corvette On the Road Course It's A Glow-In-The-Dark Aston Martin DBS For The Gumball 3000 Rally, Because "Why Not"

4 thoughts on “BangShift Tune-Up: Ford Versus Pontiac And An Airplane Boneyard In Rev Theory’s “Hell Yeah””