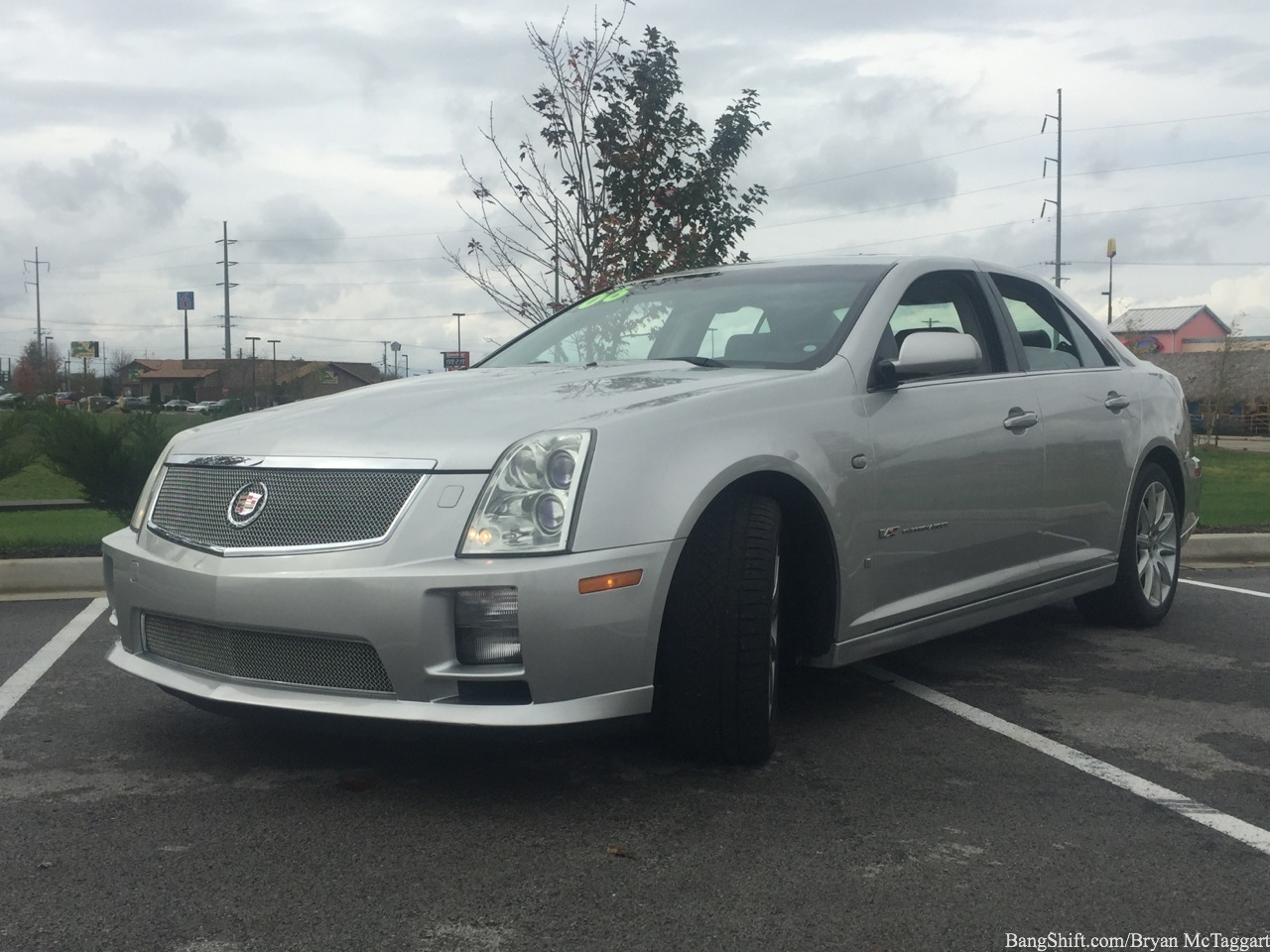 There are really three types of Cadillac: the old-school all-visual, ultra-luxury Caddy that pretty much went away after the early 1970s Eldorado, the big floaty barges that filled in both front and rear-wheel-drive form between the late 1960s to the early 2000s, and then the new Art & Science concept that has been going on lately. Out of the newer Cadillacs, the CTS-V is the one we know and love: it’s a riot to drive, it’s a proper factory hot rod, and the first two generations could have a six-speed in them. Cadillac wasn’t messing around with their performance renaissance, and the CTS-V was genesis. But it wasn’t the only car that came out in the early 2000s that the wreath and crest team unloaded on the unsuspecting general public. The STS-V was another stomper, but honestly, due to low production figures and a small production schedule, it flew well under the radar and has faded into the unknown.

Honestly, I wasn’t expecting to test drive any car when I went into Campbell Chevrolet…I needed to ask a question. I just happened to notice a hot-rod Cadillac with a “V” badge sitting in the used-car lot. I honestly thought I was looking at a second-generation CTS-V at first, which was enough of a score, but the door badge woke me up out of a jet-lagged fog: 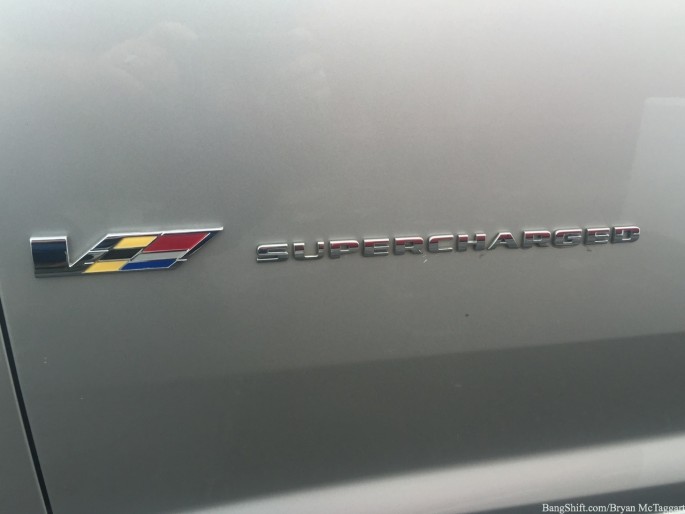 Oh, shit. Now it’s on. Next up was the shifter…aww, an automatic. Well, can’t win them all. And that’s when J.T., our friend at Campbell Chevrolet who has hooked us up in the past (See also: Chevrolet SS test drive and my mother-in-law’s Tahoe) came up with the keyfob in hand. I barely got a greeting out of the way before he tossed me the keyfob and told me to take it for a spin…on my own. Before I even start this review, thank you, dude. You made my day. 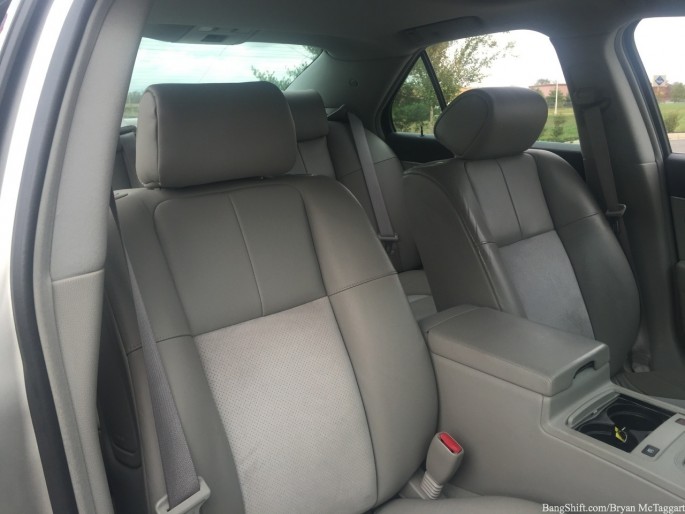 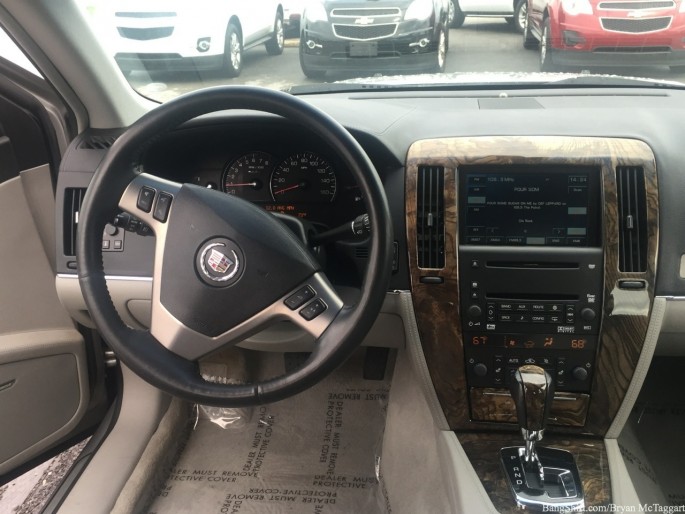 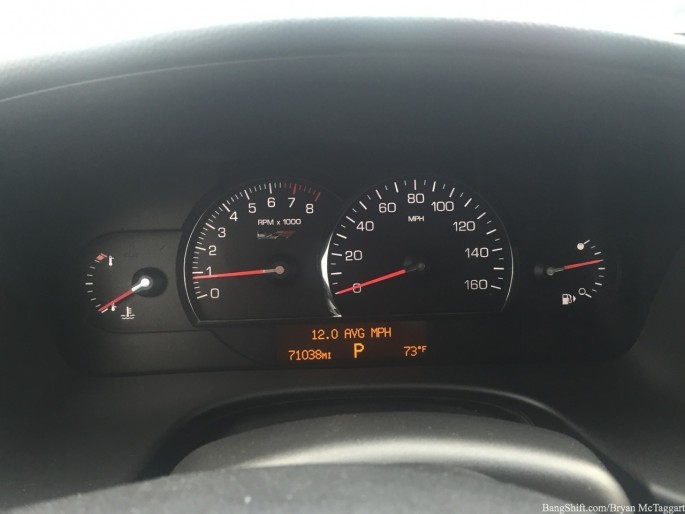 Let’s start with the quiet stuff first: look at the interior: That is real olive-stained ash wood trim, and the interior of these cars were put together by Dräxlmaier, a company better known for doing interiors for the likes of Jaguar, Maybach and Bugatti. Trust me, it’s not the typical GM quality…the seats feel considerably better and the only complaint I have that isn’t related to the gray interior color is that the seats could use some more side bolstering, considering the pumped up nature of the STS-V. The dash is straight-up business: temp, tach, speedometer, fuel, and a digital display for most other things, including a bar readout for the great big happy pill on top of the engine. The shifter has a legit manumatic mode that offers up a different shifting tune than the stock automatic programming and the Bose stereo system has the capability to leave you perfectly deaf. Around town the STS-V is a bank vault, quiet with just a light hint of higher-pitched V8 noise, and a growly blower noise once the boost bar wakes up a bit. Outside, the car is a sleeper. If you know what you are looking for you will pick up the cues: the mesh grille that is a V-spec calling card, the hood is slightly domed to cover the Roots-type supercharger, the wheels and tires are significantly more sporty than the standard fare, and there is a ducktail spoiler and a set of low-restriction pipes out back. 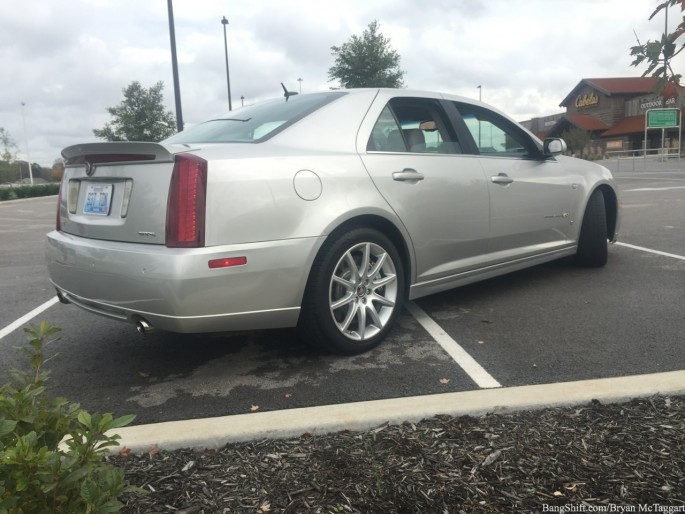 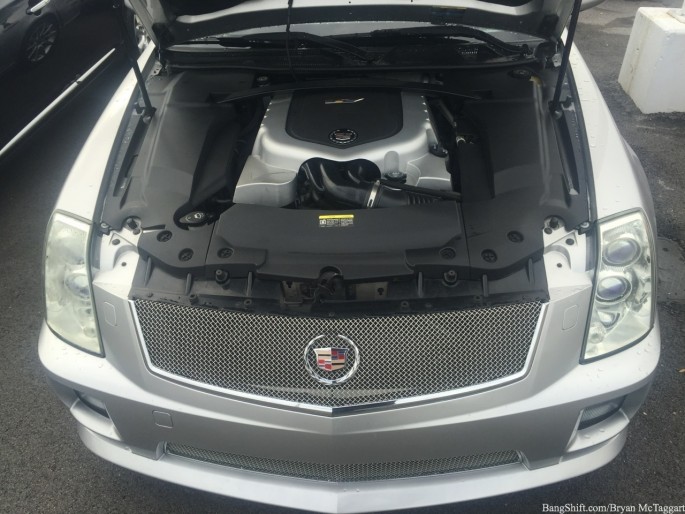 Ok, enough bullshit. You want to know how it runs, and I had to find out once I figured out what I was looking. For the anti-LS crowd, breathe free: the engine in this beast is the hotter version of the 4.4L LC3 32-valve Northstar V8. Found only here and in the XLR-V, it’s 266 cubic inches that thump out 469 horsepower and 439 ft/lbs of torque, with about 15psi of intercooled boost available whenever your right foot calls for some fun. When you are just tooling around, it comes across like a mid-1990s Eldorado, with heavy steering, a comfortable ride and almost no interior noise. The ride doesn’t have the marshmallow float sensation that the Eldorado does, however…the STS is taught and while it isn’t CTS-V crisp, it’s still planted and feels nice. The 6L80 six-speed automatic does come with the slaparound shifter on the floor, but in the short drive we took it on we got better results by leaving the car in Drive. That’s not a knock against the manual feature…while it isn’t as on-point as the Chevrolet SS, it’s only off just barely. Matting the long pedal on the right rewards you with one very angry small-displacement wail and a supercharger that wants to reinvent your concept of time and space. Our one suggestion: you probably should not have traction control off if you plan on doing that often. Even on lightly moist roads, the back end acted like it wanted to come around to play. How often could you normally say something like that about a Cadillac STS? The Brembo brakes stop as well as their legend imples they should, and though Pirellis came standard, the Hankook Ventus tires performed admirably. 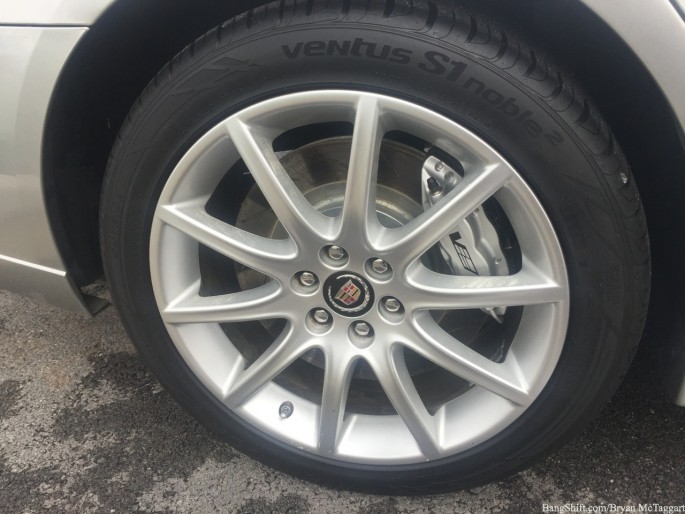 It plays like a late-model, but how does a used STS-V stack up? The 2006 model we drove has 71,000-ish miles on the clock…put on by someone much more light-footed than we tend to be, for sure…and has aged well. The only two knocks I had on the whole car involved wheels that needed a detailing and the ashtray’s trim that had started to change shape at one corner…nothing I’d be concerned about. So would I consider purchase? New, the STS-V was just under $78,000. This particular ride is sitting just under $17,000, which is just about on-par with NADA guides. Gotta love that depreciation, because that is one hell of a bang for your buck. 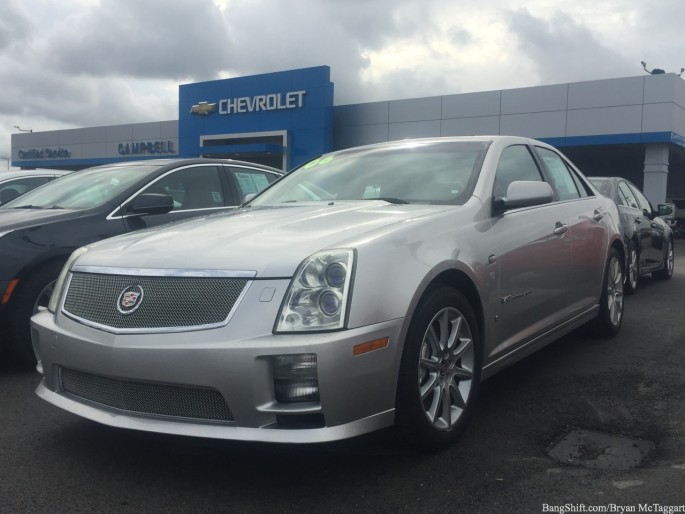 Top 11: McTaggart's First Round of Favorites From SEMA 2015! Cars, Trucks, Lowriders and Hot Rods, It's All Here - Even A VW Bus! Love It Or Hate It? Fred Williams' Crazed 1973 Mad-Maxxis Off-RoadRunner Looks Tough At SEMA