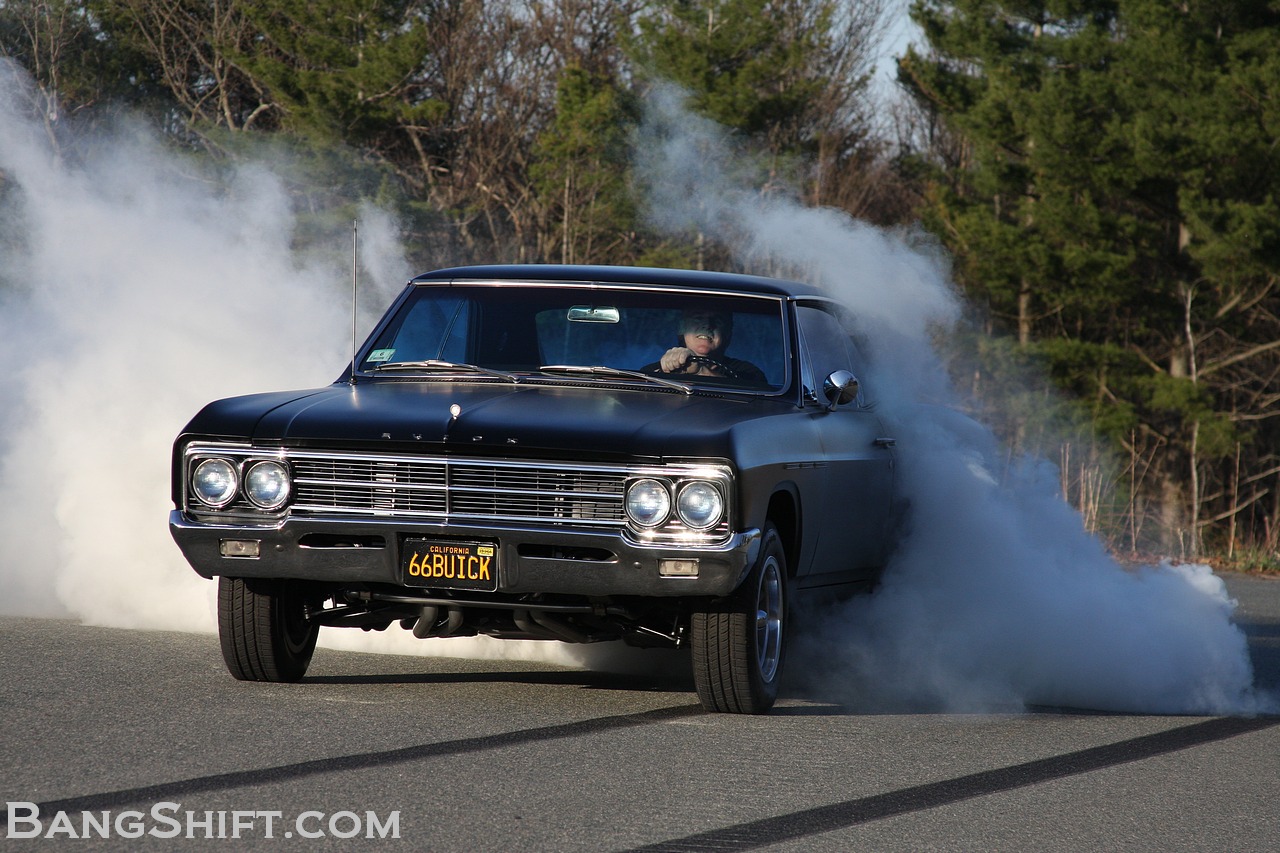 We get as wrapped up in stuff as anyone else. Following all these big builds all over the place with guys shoving massive turbos into tube chassis cars capable of running harder and faster than full tilt racers can skew your vision on simple, pure, awesome cars. That may have been the case with us when we saw Wayne Dennmore’s 1966 Buick Special. From the blue tint on the windows and headlights to the mismatched wheels, to the Buick 455 under the hood, the M&H tires on the rear, and the big Lakewood ladder bars this is one killer car. It runs hard and reliable, drives very well, and takes a few of the above mentioned elements that would seem to conflict on paper and makes them as right as rain. The other good thing is that we can verify that the Buick is capable of doing some of the most awesome burnouts we have seen in a long damned time! As you’ll see below, Wayne didn’t “embarrass the family” when he let all that torque loose on the sticky M&Hs. 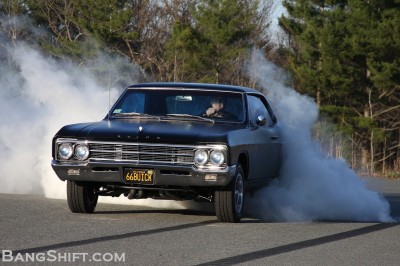 Simplicity is a thing we seem to be losing in hot rodding. It seems like guys are less and less apt to build a car like Wayne’s in favor of something with EFI, an overdrive transmission, more handling capability, or an LS engine. The fact that this car is packing those 455ci of Buick power makes it exponentially cooler in our book. It would still look neat with a Chevy engine in it, but it would not be the same car by a long shot. Wayne did this car by himself with help from buddies and paint by Ash’s Body Shop in Weymouth, Massachusetts. It is amazingly clean and pulls off a cool late 1960s street racer vibe as good or better than anything we have seen in some time. At first glance you think, “Cool a rough old street racer!” Then you get up close to this thing and you realize it is as clean and nice and straight and awesome as anything you’ve ever laid eyes on!

There were ample opportunities to go over the top with this car, but Wayne stuck to his guns (and what his wallet would allow) and ended up with a street machine that is 100% BangShift approved.

YOU KNOW HOW WE LIKE TO ROLL, WE’RE GOING TO TELL THE STORY OF THIS 1966 BUICK THROUGH PHOTOS AND CAPTIONS! 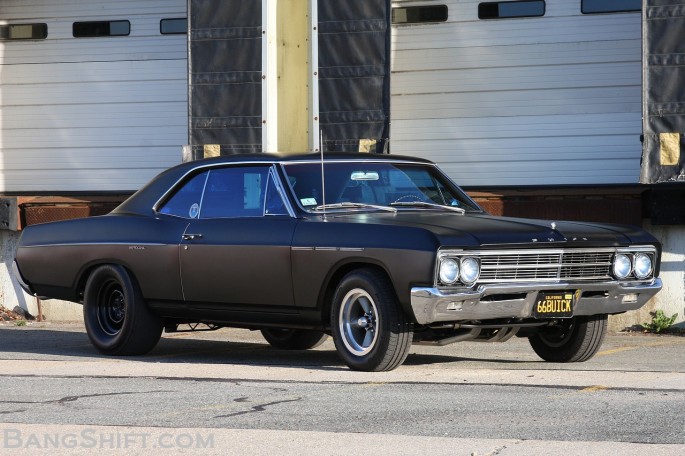 In stock form there’s not a lot “special” about a Buick Special. It was the bottom wrung on the Buick ladder, not allowing the buyer to option AC, front disc brakes, etc. Stock power would have been from a six popper or a 300ci V8 making about 200hp. Wayne’s 455 which was built to Stage 1 specs should be making about 400hp and 500 lb/ft of torque. 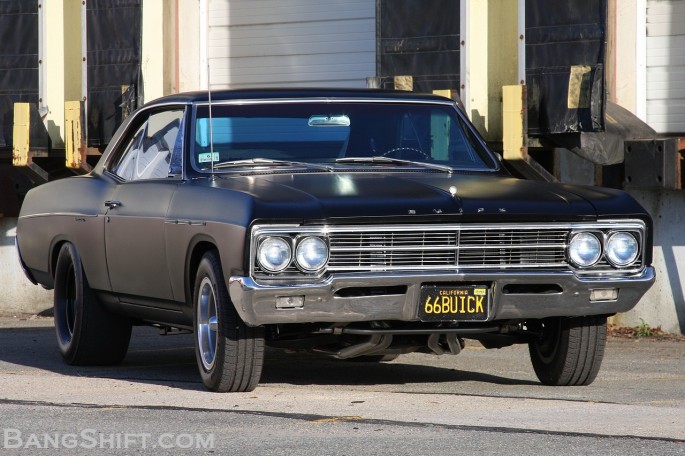 Interestingly Wayne is not a Buick guy by definition. He bought this car in 1994 because it was a rust free piece at a price he couldn’t pass up. It took until 2009 for the car to emerge as you see it here, but along the way he grabbed a parts car which allowed for the addition of front disc brakes, some better sway bars, and the AC equipment. 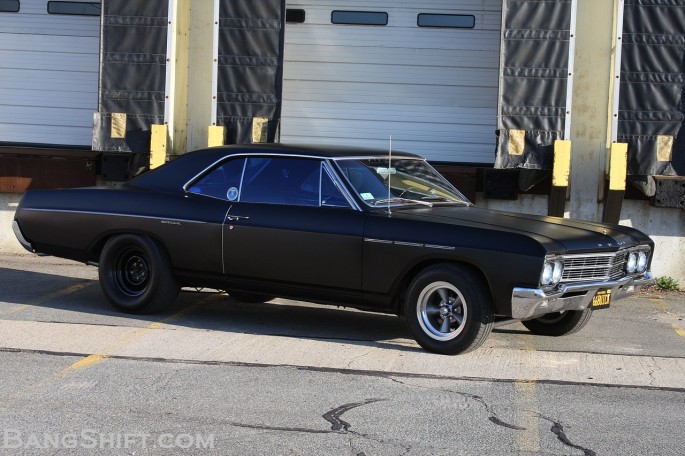 The wheels are one of the factors we love about this Buick. The fronts are 1960s era five spokes of unknown make. They look like Americans but Wayne was not sure they actually were. The back wheels are 15x8s with 5″ of offset and are wrapped with M&H Muscle Car tires that measure 275/60/15. They are pure perfection on there. 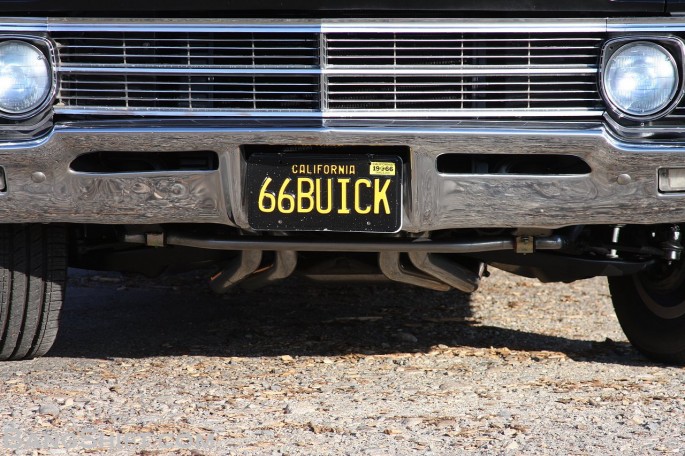 The killer headers were made by Rockland, Massachusetts based Tubular Automotive. These guys have been making headers for cars all over the country since the 1960s. They do great work and you can see some of it here. Wayne actually wants to see the pipes a little more so he may have the guys tweak the headers so they peek down just a tad lower than they are now. Seeing those front two pipes on each side hooking around the front of the crossmember is bad ass and retro awesome. 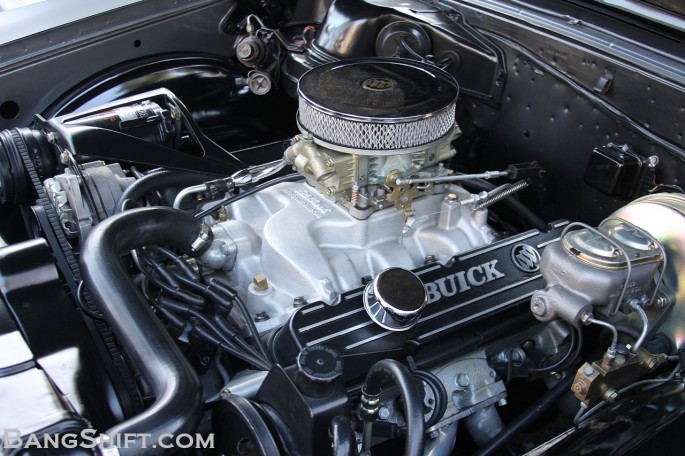 Here’s the big lump of Buick awesome that provides the umph for this Special. Wayne told us that the engine was built close to Stage 1 specs, with the heads being worked some, an Edelbrock Performer 455 intake being added, as well as a Holley carb. The cam is from TA performance and it is a piece that lets you know it is there but is by no means rowdy. This thing makes torque like a steam locomotive! 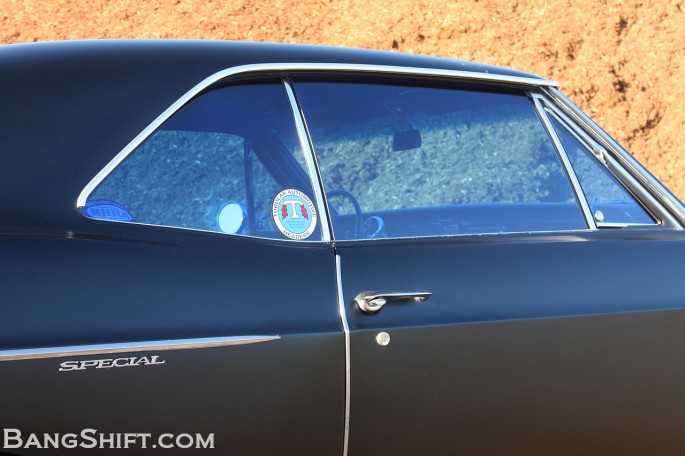 The blue tinted glass is an awesome touch that Wayne thought may have been too dark at first. We think the shade is just right! 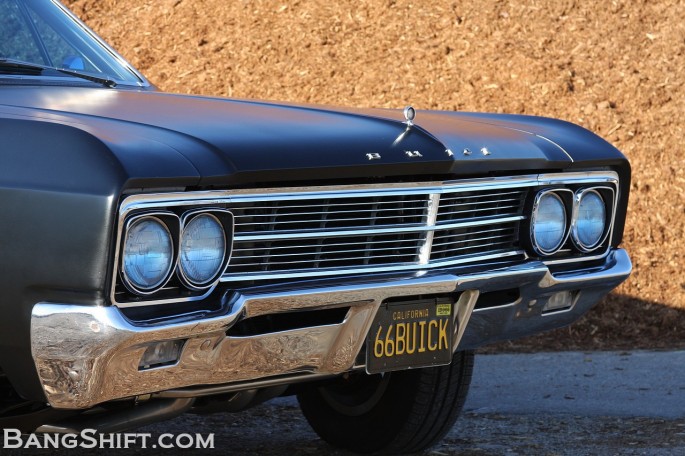 Wayne tinted the headlights with some paint he got from a local craft store. He said it was the only time he has been to a craft store and we believe him. With the neat ice blue color he got on these lights, the craft store trip was worth it! 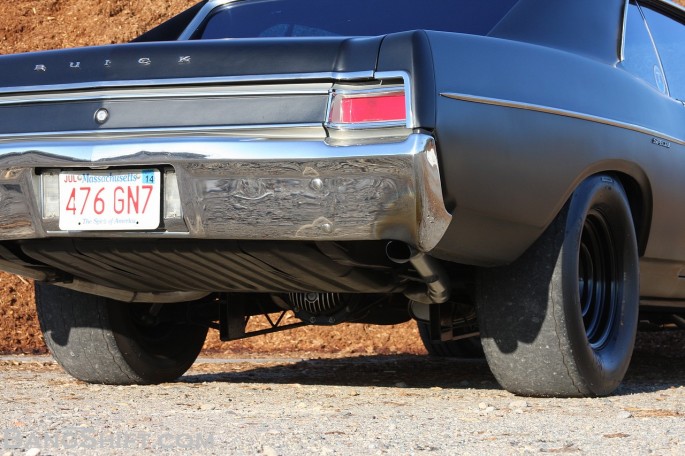 Anchoring things out back is a tried and true BOP 12-bolt that is filled with 3.42 gears. A Turbo 400 transmission sits between the engine and the rear end. The gearing is great because the car is happy cruising down the road the the copious torque is more than enough to make it scoot when necessary. Mike’s Pro Bend fabricated the 2.5″ exhasut. The car sounds fantastic and the whole system has been coated so it is cleaner looking than our silverware. 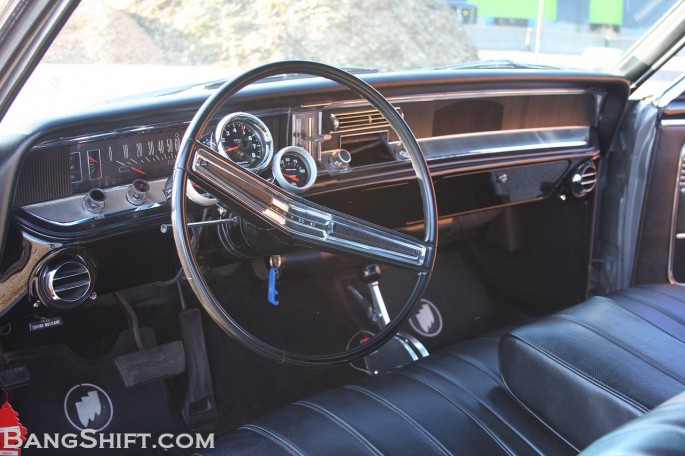 Interior-wise the car is all factory Buick with a couple of additions. The three gauge Auto Meter pod on the steering column and the B&M floor shifter are the two deviations from factory. 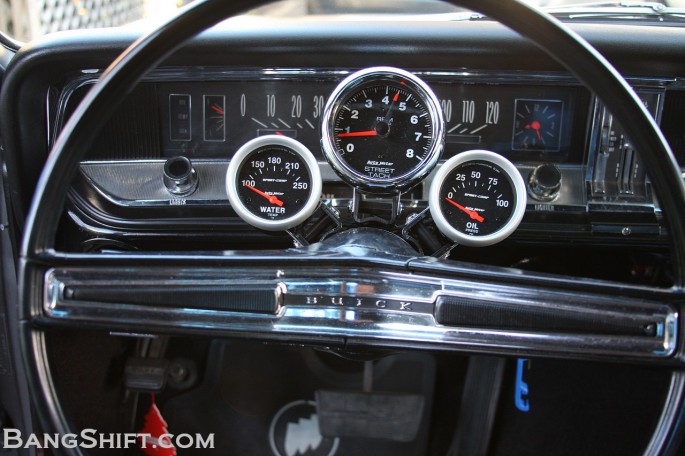 Speaking of those three Auto Meter gauges, the vital info being displayed here is through the tach, oil pressure, and temp gauges. 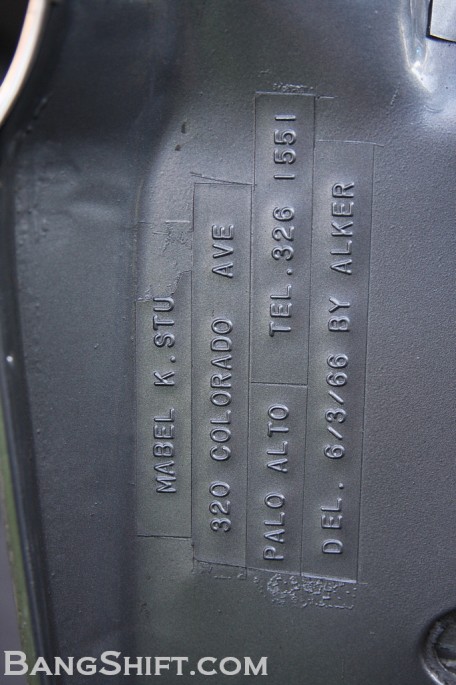 Check this out! The car was originally a California piece and Mabel Stu was apparently the original owner! Wayne said that the protecto plate and everything came with the car and this was on the door when it got it. We’re glad that he’s never taking it off. How cool is this?! 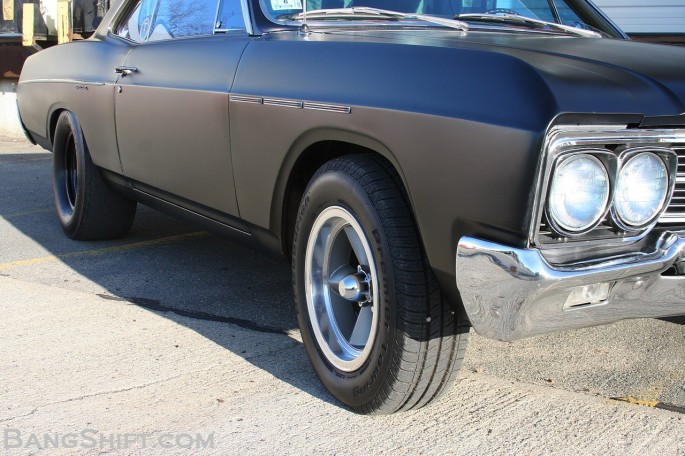 The paint is hot rod black and while there are lots of cars that have been shot this color, the Buick stands out to us because of how straight and nice the body is and because it has had the original Special trim added back on. The trim gives it some nice accent points and keeps it from looking very slab sided as some cars in this color do. 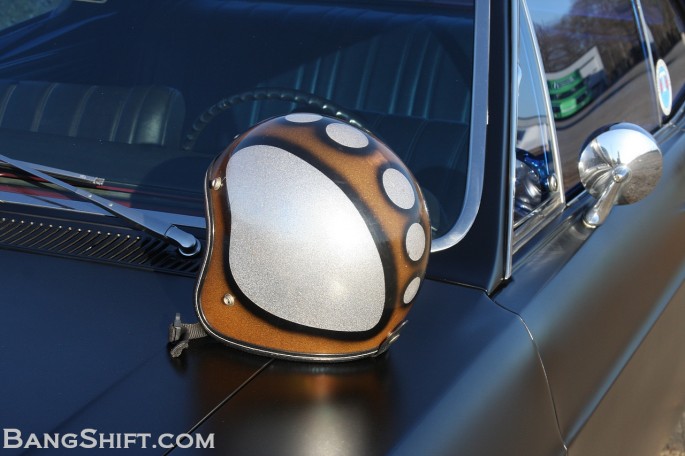 Wayne rolls with this cool old helmet in the back of the car. Believe it or not, this thing was just sitting on the shelf when he moved into his house! It was hand painted back in the day and there is incredible amounts of flake in the paint. We don’t know how they actually shot it out of a gun it’s so thick! 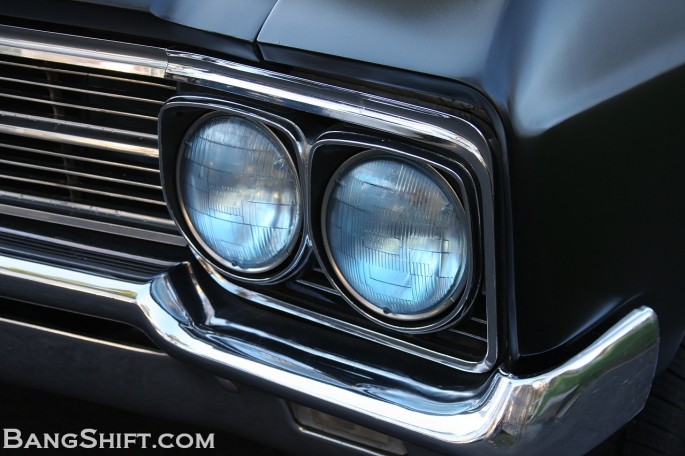 As the afternoon sun was setting we got an even better look at the nice tint on the windows and lights. These little details totally make this car. 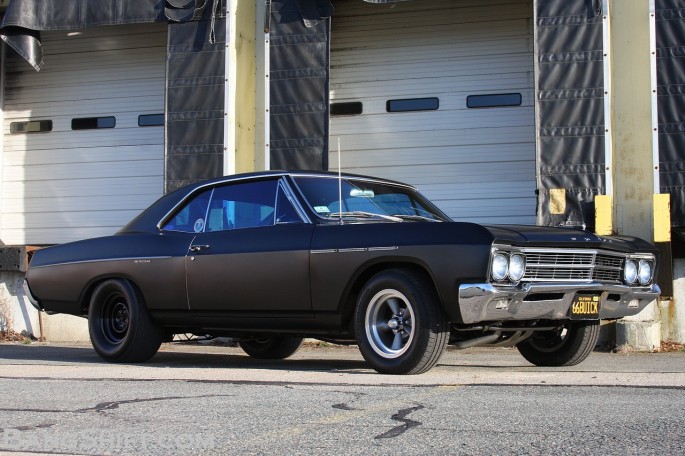 A lot of time stuff spirals out of control when guys start adding “touches” to their car, but Wayne knew where to stop. A little goes a long way. Take the ladder bars for example. If there were bright yellow they would stick out like a sore thumb. Painted black, they are there enough to be noticed and appreciated but not jump out and steal attention away from other stuff. 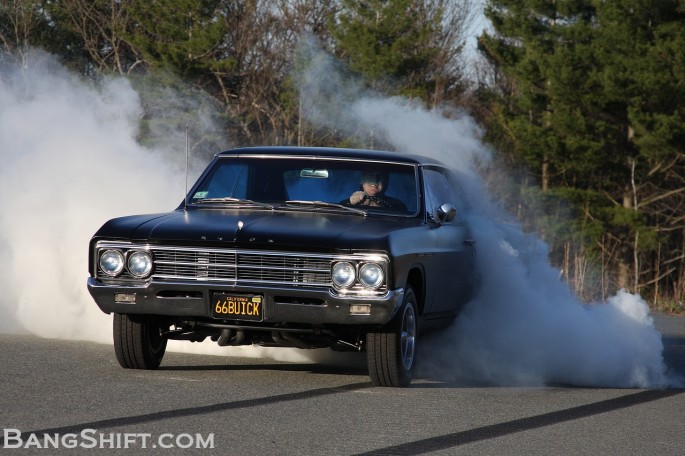 Then it came time for the burnouts and boy was Wayne ever willing and able to wreck some tires! We tattooed our secret photo location pretty well this day! 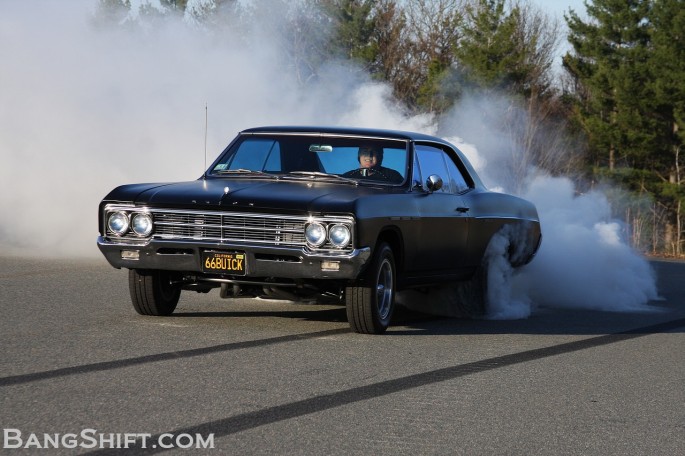 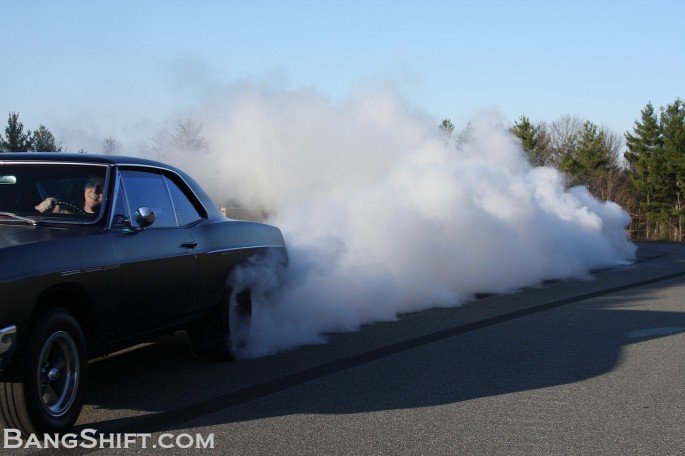 He went another 100 yards past us! Note his smiling face and the absolutely humongous cloud of smoke! 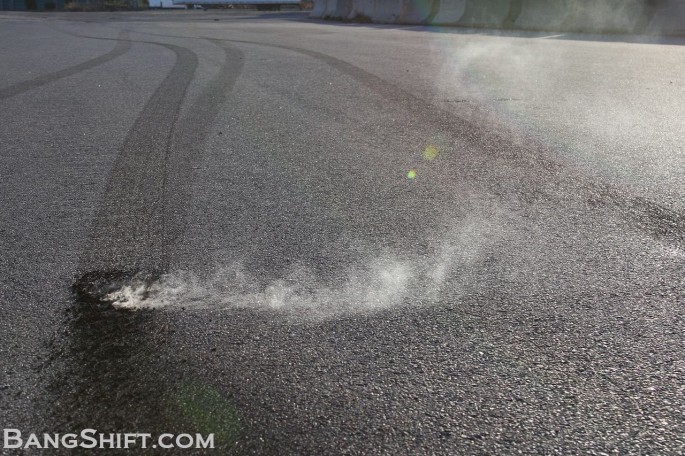 The end! CLICK THE LINK BELOW TO SEE MORE THAN 150 PHOTOS OF THIS BUICK!