Check These Out: Rare Photos Of A 1962 DeSoto Mockup! 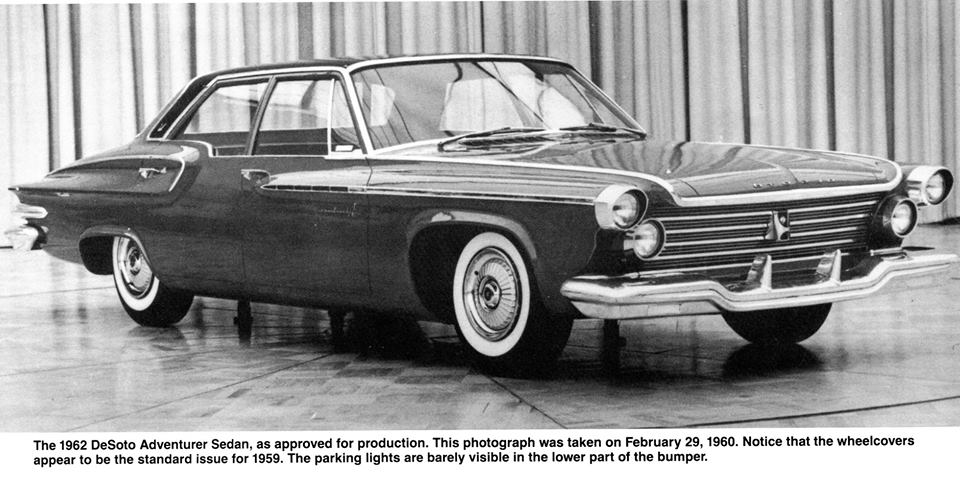 Ever wonder if a brand that was preparing to be killed off could have pulled out a turnaround if given just a little bit more time? Pontiac was swinging for the fences with the G8 and things looked promising. Plymouth may have been the bastard child at Chrysler, but the Plymouth Howler concept (a Prowler with a truck bed and a V8) raised some eyebrows. Oldsmobile was in the middle of developing the Antares sedan when the ax fell. Maybe they would sell, maybe not, but it’s always interesting to see what could have been.

DeSoto was circling the drain after 1958. While their Flitesweep, Firedome and Fireflite had done well and their top-of-the-line Adventurer was a visual knockout with early Hemi power, the sales didn’t reflect that. Instead, 1958 was a horrible year across the board for all of the manufacturers and DeSoto had taken a huge hit, with sales almost 60% below normal in 1958 and falling like a rock every year afterwards. By late 1960 the brand had been killed, and the last DeSotos, which were really just a Chrysler Windsor with different badging, were sold by the end of 1961.

As usual, most designers at a dying brand don’t want to give up until it’s all over and done with, so a 1962 DeSoto was built on the upcoming B-body platform, at least as far as I can tell from these pictures. According to Thom Taylor, “Supposedly a Chrysler exec was at some wingding at the Grosse Point yacht club, or country club, or some such event, and overheard Ed Cole talking about a “new, smaller Chevy.” The exec took it to mean that Chevy was going to be new and smaller, and rushed back to spearhead a downsize that ruined the proportions of each and every new 1962 product. Of course Cole was talking about the Chevy II, not the entire line of Chevys. It was a huge mistake and Plymouth/Dodge sales reflected it. As for DeSoto, product cycles dictate freezing products two to three years in advance so the DeSotos you showed were wrapped and waiting for tooling bids, etc., to begin production that never was.”

Considering these pictures were taken in early 1960, it’s a safe bet that these cars were the larger version. The nose has the canted headlight treatment similar to other 1960-61 Mopars, but the treatment is unique. There is an odd “kick-up” in the rear door glass that follows the body line out. In the rear, the tri-cone taillights went horizontal but made a return, and the rest of the car visually appears a lot like a 1963 New Yorker. The “cove” treatment that starts in the middle of the rear door and extends out to the trunk, planing off a flat fin is an interesting touch, as is the two-tone roof treatment.

Would this car save DeSoto? Considering the sales nosedive that the brand took, coupled with shifting corporate sales strategies, it would’ve taken a miracle to save DeSoto. The only possible way would have been to position Plymouth as the poverty-level car, DeSoto as the cheap performer, Dodge as the well-appointed performer, Chrysler as the cheap luxury and Imperial as the ultimate luxury. Given Chrysler’s corporate climate at the time, there was no way that could work out. Trimming DeSoto was a smart move in the end. Still, as I often do when writing these, I have to wonder what kind of muscle car DeSoto would bring out…

Watch Some Of The Earliest Hornsby Tracked Vehicles Known To Man In Their Earliest Tests Circa 1908 Professional Road Rage: BTCC Racing From 1991-2002, or How You Make Midsize Sedans Wild!