Classic YouTube: Going Full-Vertical In A Blazer At Bowling Green 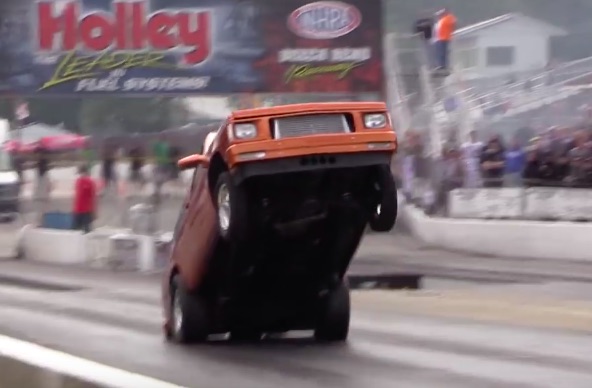 Oil downs are an absolute killer at a drag race. Instead of roaring engines and frying tires, we get the joy of watching the track cleanup crew clean and sweep the track to make sure the next racers don’t get a slick surprise. Sometimes it’s inevitable…if an engine goes “boom”, even if there is a diaper under the block, there’s still a chance that something is down on the track. The rule about this is simple: if you, as a driver, even think that you’re putting down oil, pull off to the side to minimize downtime. This makes everyone happy. 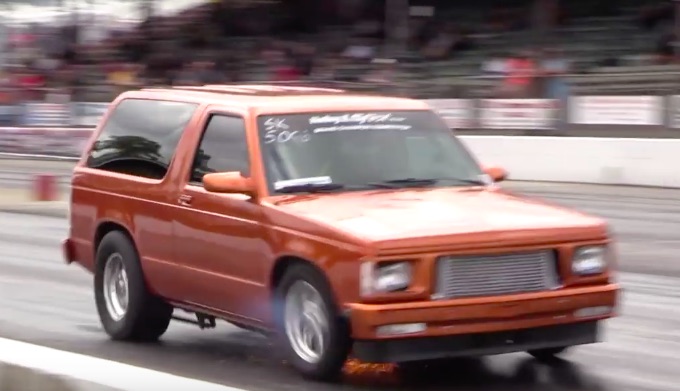 You know what else makes everyone happy? An on-the-bumper wheelie at launch! It’s not the fastest trip down the quarter mile, but this Blazer had no trouble giving the driver a beautiful view of the sky in Bowling Green before slamming down like a ton of bricks, breaking open the oil pan (among other carnage). We will only assume that the landing rattled the driver, because he rolled the entire strip down bleeding oil from an open pan. While Brian beat his head against the wall, the track crew laid down fourteen or so bags of oil dry on the track. I wasn’t on the track to see this actually happen (I was at NCM that morning) but BigKlieb34 was and got a front-row seat for the action.

Editor’s note: When I wrote this article originally, I only knew one side of the story. Barry, the madman behind the wheel, checked in shortly afterwards:

“hey that was me and sorry first of all.

The pan sits above everything so I never thought in a million years that the pan would break. And the rear view mirror snaps off the windshield so I couldn’t see behind me

The truck did the same wheelie 3 weeks before and just broke the suspension so I was trying to make sure I could drive it to the other end of the track and when I got to the big end I glanced in the side mirror and saw the smoke and said shit and cut it off and got over.

I hate being that guy but had to give my side of the story.”

3 thoughts on “Classic YouTube: Going Full-Vertical In A Blazer At Bowling Green”