Repaving The Road With A GMC TopKick 4500 The BangShift Way! Medium Duty Burnout For The Win! 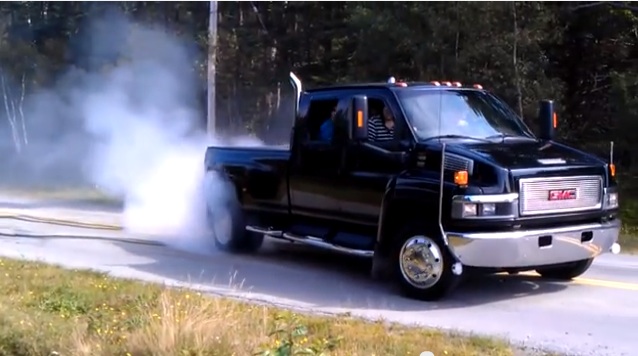 If you’re a fan of the live-action Transformers movies, you’re familiar with Ironhide, a lifted GMC TopKick 4500 with a pickup bed. Considered one of the oldest and most powerful of the Autobots, Ironhide is the weapons specialist of the team, has the soul of an old battle-hardened soldier, and is a very formidable opponent. This TopKick isn’t Ironhide…this is his delinquent twin brother, the one who likes to go out, have fun and ignore the repercussions. The 6.6L Duramax engine has plenty of power to move a Sierra, but getting an 11,000+ lb. TopKick to hang its tail out with the rears burning off is a feat, indeed. It takes a minute for the tires to come loose, but once they do they spin until the driver decides he’s had enough. While it’s cool to see a big truck burn them off, we have to wonder if somebody’s father has seen this footage…the truck is filled with a bunch of high school or college-aged guys and we get the feeling that the truck was borrowed…just a hunch.

One thought on “Repaving The Road With A GMC TopKick 4500 The BangShift Way! Medium Duty Burnout For The Win!”