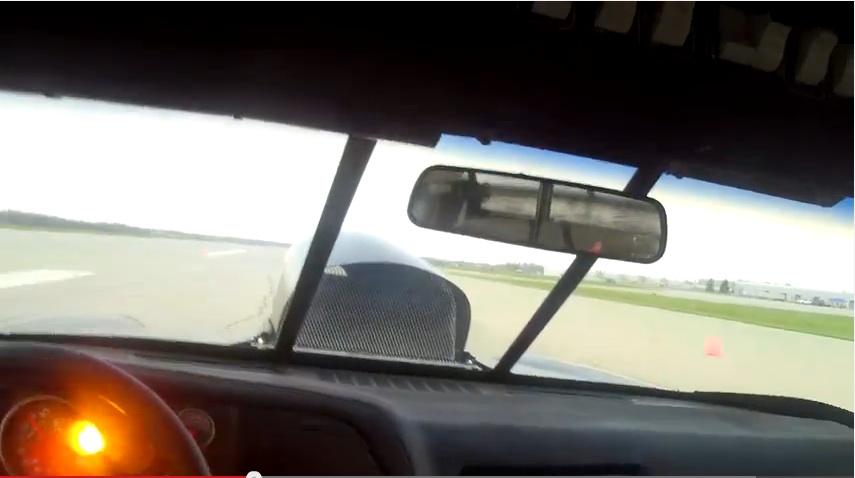 David Matyjasik and his brother Mike have run their Time Bomb Camaro at ECTA standing mile events for a decade now and they had a banner weekend during the opening meet of the 2015 ECTA season at the Ohio Mile last weekend. The brothers managed to clock a 213 mph speed in their Camaro during the course of the race. This video was taken during a 209 mph lap and it delivers on all levels. How you ask? Huge rpm, huge sound, huge speeds, and a great perspective on the whole one mile land speed racing scene.

As we have told you in the past the guys run a 364ci engine that is based off of a small block Chevrolet and topped with a set of Buick heads that were designed for the high RPM world of NASCAR speedway racing but never actually allowed there. The result is an engine that they spray the crap out of and that makes a ton of horsepower. They shift this baby at 9,000 RPM and it sings the song of the BangShift people in spades. The best part of the whole thing is the fact that it is a homespun effort and the two brothers have stuck together doing it for so many years. Although they did not claim the top prize at the Hot Rod Top Speed Challenge this year they were in contention with the 213mph slip and that is really something.

Rumor has it that the boys are going to park the thing for a while, which we think is kind of tragic because it left the track running as good (or better) than it was when it showed up. Yes, this is us goading you into keeping this sucker out of the mothballs. The car is everything right and good in the world of racing!

PRESS PLAY BELOW TO RIDE ALONG IN THE TIME BOMB CAMARO

Repaving The Road With A GMC TopKick 4500 The BangShift Way! Medium Duty Burnout For The Win! Keels N Wheels 2015: More Coverage From The Amazing Show In Texas