Shock and Awe: How A Borrowed Yenko Camaro Became A Record Run At The Firecracker Mile 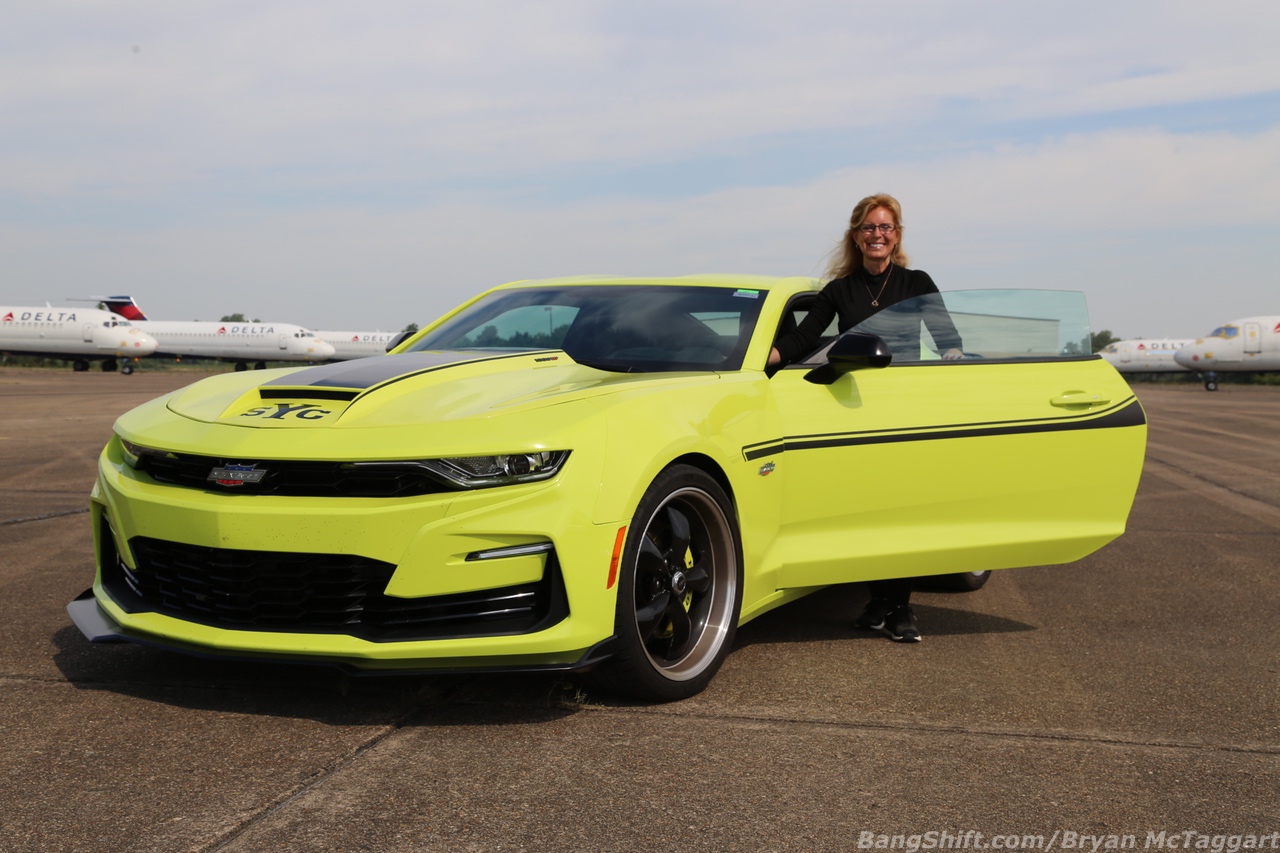 Borrowing the car…if that isn’t a phrase that will make a gearhead nervous, I don’t know what one is. We tend to view our four-wheeled contraptions as an extension of ourselves, our wards, the object of our affection that we spend way too much time on when we need to scratch that itch for something to do. Loaning out your car is always a hand-wringing experience, even if you have no other issue with the person borrowing the car. If you loaned your truck to your father so he could move some stuff around, you probably have no trust issue with the way he drives, how he would use your truck or the security of your vehicle in his hands. That doesn’t mean that you don’t worry about what might happen while he’s driving it. Will it be the day that your trusty pickup finally fails? What about an accident nobody could see coming? See what I mean? You trust the person, but do you trust the elements of risk you can do nothing about? 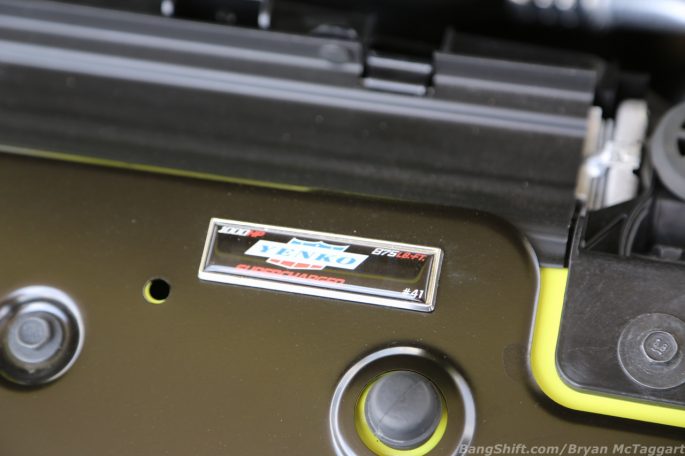 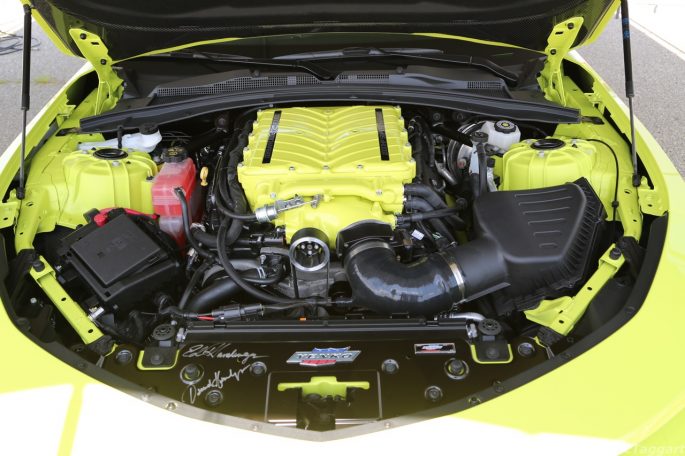 Let’s talk about this car for a second. What you are looking at is one of the fifty 2020 Chevrolet Camaros that were converted into Yenko/SC Stage 2 specification by Specialty Vehicle Engineering. Starting with a Camaro SS 1LE, the car would be ordered through a dealership and built like normal before being shipped out to SVE’s New Jersey location, where the LT1 is punched out to 6.8 liters and is given a new crank, rods, forged pistons, CNC ported heads, ARP studs, a full-kill dual-mode exhaust system, an uprated fuel system, high-flow catalytic converters, and a blower that means business. You also gain the Torq-Thrust style wheels, Michelin Pilot Sport 4S tires, new springs, new bushings, and the body kit pieces unique to the Yenko. Add in the MagnaRide shocks, Recaro seats and the electronic limited slip differential that comes with the 1LE package, and your money has purchased 1,000 horsepower of violence. Even if the Camaro isn’t your cup of tea, you have to admire the “experts only” setup of the car. Even amateurs who have some experience need to be cautious with this kind of grunt at the ready. And I’ll personally attest to this example, with it’s bright paint that’s simply known as “Shock”: this was the howler of the 2020 ECTA Firecracker Mile. You knew when this car was awake and you knew when it was moving. 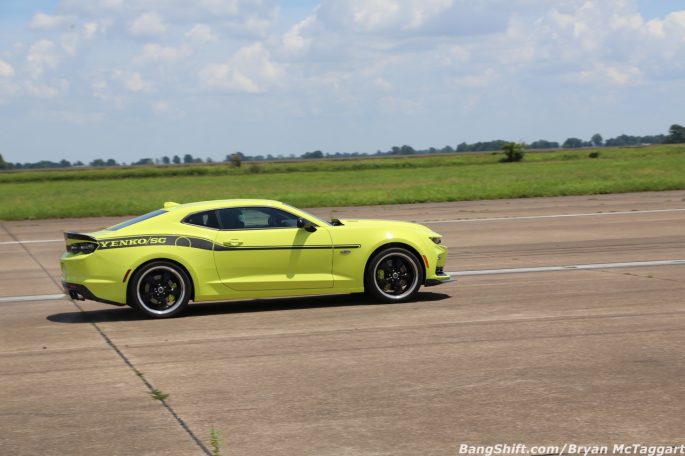 The Yenko was the first car I took notice to as I moved past the rows of aircraft. You couldn’t miss the car. It sounded new-age rowdy, as violent as it’s 1969 predecessor could have been if not more so. The man behind the wheel, Vance Kershner, had spent the better part of the first day learning what the car could do and was edging up to his top speed of 189.474 MPH in the mile and 201.342 in the 1.25 mile. I had first spoken with Vance, and he seemed to be having a riot of a time. Who wouldn’t? Hot car, high speeds…sounds like heaven, doesn’t it? It seems that Kershner is the trusting type, because not many would encourage a friend of theirs to go see if they could run similar speeds in their own car. But that’s exactly what happened on Saturday when he let his friend, Ginger Baker Rust, take the Camaro out to make some passes and see what she thought of the car and the ECTA’s scene at Blytheville.

When I interviewed Ginger, the feeling that I got was that this wasn’t her first rodeo in the automotive world. She had come to the Firecracker Mile to support Aaron Brown and The Garage Shop in their pursuit for some speed goals, but Kershner knew that she was on the property and encouraged her to try the Yenko out and go for her ECTA license. During the interview, she mentioned to me that at age 51, she “hadn’t raced anything in 29 years and had never driven a car like the Yenko”, which raised an eyebrow. Hadn’t raced in 29 years? What was it that she raced prior…and more important, why wait nearly three decades to get behind the wheel again? Well, that’s the thing…she’s a motorsports sports agent with decades of corporate marketing experience, accolades and achievements, whose latest work was with Ryan Newman, driver of the #6 Ford in the NASCAR Cup Series. She’s the one behind the scenes who works corporate partnerships, contracts, and the business side of various motorsports. If you’ve seen the movie Jerry Maguire, her day-to-day operations are pretty much what Tom Cruise’s character does. If she wanted to, she could pick any kind of motorsport to wheel around in for a thrill. But when she was out on the tarmac at Blytheville, taking this Camaro that sounds like the devil’s bass cabinet down a runway that used to be the haunt of KC-135s and Canberras at wide-open throttle seemed like it just came second nature to her. I don’t know if she was trying to break a record, but on her first real blast in the Yenko, while she was getting used to the feel of the car and figuring out her shift points, she laid down a 189.843 on the one-mile course earning her a record in the Modern Street/Blown 8-Cylinder category and then came back the next round with a 199.557 pass on the 1.25 mile course, which made her the second-fastest woman in the history of the class and the third fastest in the history of the Arkansas mile. Let’s put that into perspective: she came out to a runway airstrip behind the wheel in a street car, ran just a couple miles per hour off of Ryan Newman’s typical day, watched Aaron Brown’s team work to get the top spot in the Real Street category of the BangShift.com Street Car Shootout event, then probably went out with everybody for a nice dinner to celebrate. It’s that simple, folks. One borrowed car, a lot of faith, and a heavy right foot made records and memories.

New Hypercar On The Block: The Murray T.50 Is An Active Aero Equipped, V12 Powered Beast This WWII Video That Shows B-29 Bomber Crewman Inspecting Their Badly Damaged Plane After Returning To Base Is Amazing

9 thoughts on “Shock and Awe: How A Borrowed Yenko Camaro Became A Record Run At The Firecracker Mile”