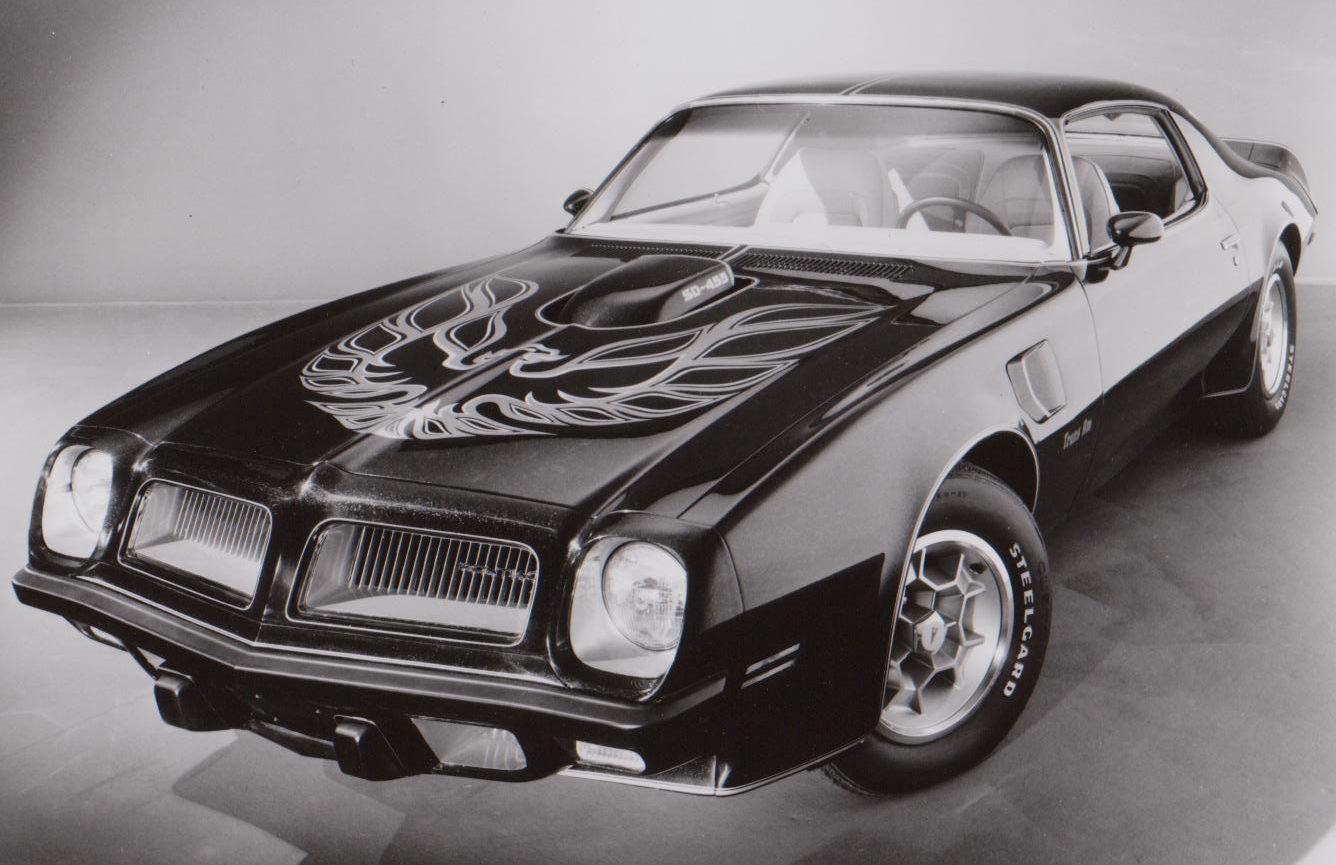 When you hear about GM design staff, it’s always the man in charge that everybody talks about: Harley Earl, Bill Mitchell, Irv Rybicki, Chuck Jordan, Wayne Cherry, and now Ed Welburn. But under each of those men, a staff of hundreds have worked to churn out some of the automotive world’s greatest designs. One of them is John Schinella — who worked on some of the most iconic Chevrolet and Pontiac models in history — and BangShift sat down to speak with him.

John Schinella was born in Concord, New Hampshire, and was educated entirely in New England. It’s important to note that, because at the time, General Motors was working with students that only came from a handful of automotive-centric colleges in Michigan and California. Schinella went to the University of New Hampshire, and to art school at New England School of Art in Boston, which is now part of Suffolk University. Virtually no one came out of that college and went to work at GM.

Schinella wasn’t even interested in cars at the time. Sculptors were part of his lineage, all the way back to Meduno, Italy. “I worked for my dad, and I learned that being the boss’s son, you got the dirtiest jobs and worked the longest hours,” he said. But at UNH, he took a class with Professor John Hatch, a watercolorist. “About half way through my first semester he said ‘What are you going to do with your talent?'” Schinella remembers; “He said ‘You have extreme talent, and it should be put to good use.'” 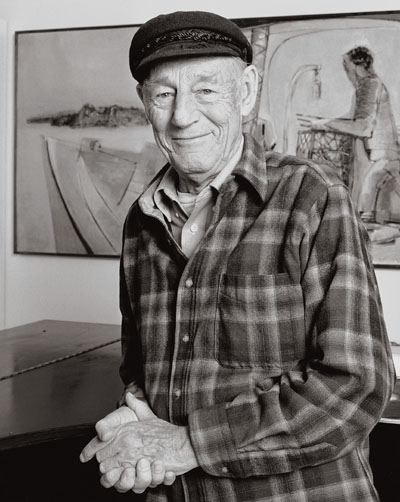 Professor Hatch suggested to Schinella that he had two choices: he could stick with his art and become a teacher and have shows, or he could get involved in industrial design. Schinella thought industrial design was where he wanted to be, so he looked at Rhode Island School of Design and several other colleges before settling on New England School of Art. “I walked in for the interview and saw the art work hanging on the walls and said ‘Oh, my goodness, what am I doing to myself?’ Six months later, my artwork was hanging on the walls. When you discover yourself, it’s amazing,” he says.

As he neared graduation, he was working for an art restorer who did restoration work for the Museum of Fine Art in Boston, as well as Bresnick Co., an advertising agency in Boston. Through a contact, he managed to learn about an summer internship program for designers at General Motors. “I wrote them a letter about my interest. I got this letter back saying they weren’t hiring at the moment, but they said ‘Here are three problems for you to work on. When you get finished with them, send them back and we’ll take a look,'” he remembers. Within 30 days, I worked on the problems and sent them to them. They sent me a note back quickly and said ‘Wow, we didn’t expect you to respond so quickly. We’re not hiring, but the moment something comes available, we’ll get in touch.'” 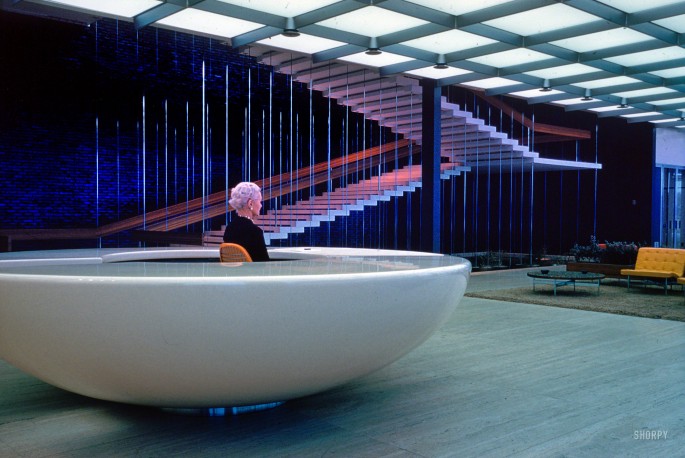 The GM Technical Center lobby circa 1956. It must’ve been like going to work at the World’s Fair every day.
Image courtesy: Shorpy

In 1961, that’s exactly what GM did. Schinella was offered a position at the futuristic GM Technical Center — “Grand Central of the Jet Age” — in a training program for designers. “GM was looking for diversity. They interviewed 30 or 40 students from around the country that weren’t coming from the traditional automotive colleges,” he says.

In his first days, he was there with two other designers who didn’t come in the traditional way, usually by graduating from Art Center College of Design in Pasadena. The Art Center guys were there, though, in the back of the room.

If you had a job in automotive design in the 1960s, chances are good you came from the Art Center College of Design in Pasadena

“Here’s Lenny Casillo (future chief of design for Oldsmobile), George Gallion (future head of design for Opel), and myself, and we knew these Art Center guys were hotshots.” The trainees were there on a temporary program and if they passed, they’d stay on with General Motors. “If things didn’t work out, I was going to drive to Hollywood and see if I could get a job designing sets,” he says.

As it turned out, Casillo, Gallion and Schinella passed, and most of the Art Center guys didn’t. All three ended up in significant positions with General Motors. “We all looked at each other and said, ‘Do you believe they’re keeping us?” he remembers.

“I wanted to work for Chevrolet, and where did they send me? Cadillac,” he laughs. But quickly, Schinella made a name for himself with his ability to draw quick sketches, sometimes d0zens in a day. “The guys used to do Canson renderings [a technique using markers on Canson paper]. They used to take about three or four days to do.” 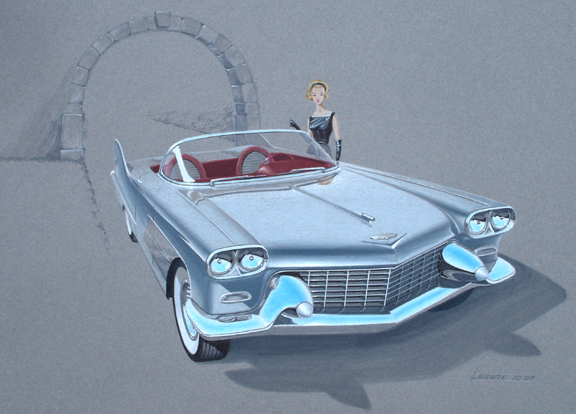 Schinella says “I started doing small sketches on newsprint, and I could fill a board up in a day. Chuck Jordan came in one day and saw all these sketches. He said, ‘You did this all in one day?'” Schinella remembers “and I said ‘Yeah, I’m just popping out some ideas.’ He said to everyone, ‘Start doing smaller sketches.'”

“I  went to the library one day to do some research,” says Schinella “I came back and the chief engineer said ‘Boy, you missed it. Mitchell was in here to do a review, and saw your rendering and wanted it out front.’ I was taken aback and quickly got it mounted.” You can see his work for Cadillac in the 1965 Cadillac taillamps. 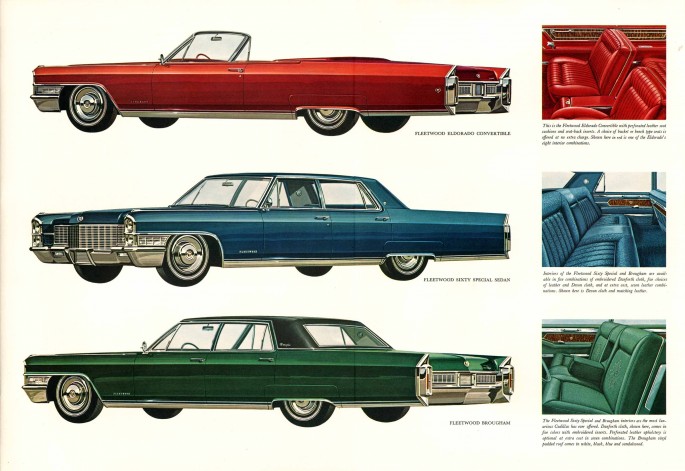 Within months, thanks to his ability to churn work out quickly, and hit Chuck Jordan with ideas he liked,  Schinella was summoned to the executive offices. He remembers that Jordan said to him, “You did a great job. We put you in there to turn the place around. We’re on fire now. But your stuff is too sporty. But I’ve got a great spot for you.” It was the clandestine Warehouse Studio, located off the grounds of the GM Tech Center on 12 Mile Road. 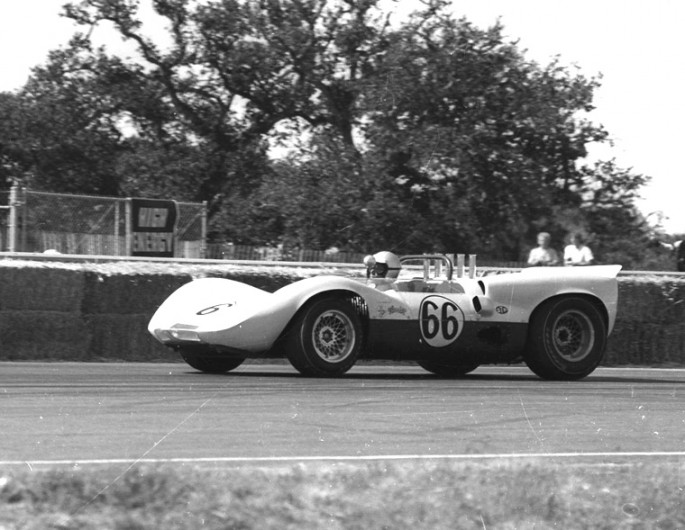 The Warehouse is where a young John Schinella began working on the Chapparal 2-Series with Larry Shinoda during GM’s corporate competition ban. “Let me tell you: Being a young man, not knowing how successful that would be, it was amazing. I had a chance to drive the prototype at the GM Proving Grounds, and it was something I’ll never forget. Firing that Chevrolet engine up, I’ll never, ever forget it.” 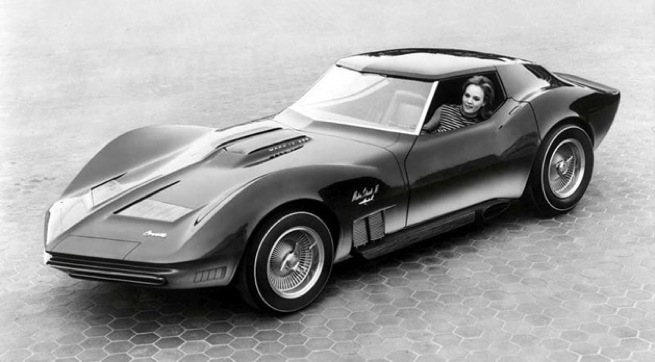 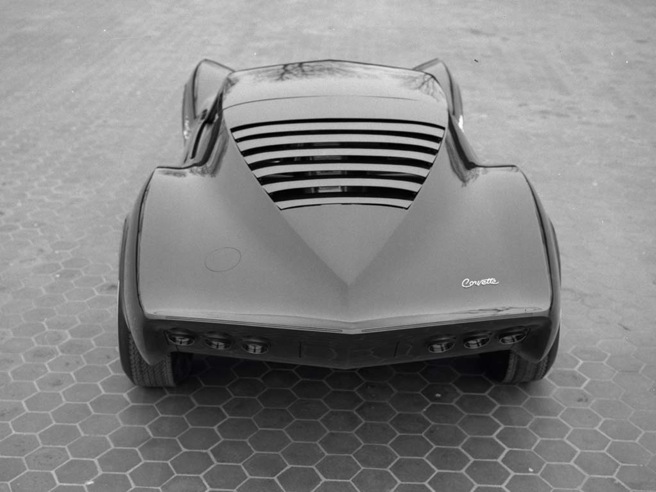 Over the next several years, Schinella would work on some of the most significant cars ever to leave Chevrolet: the Mako Shark II. The 1967 Camaro. The 1968 Corvette. “Those four and a half years before I left for Australia,” says Schinella, “were the greatest time for a young man.” 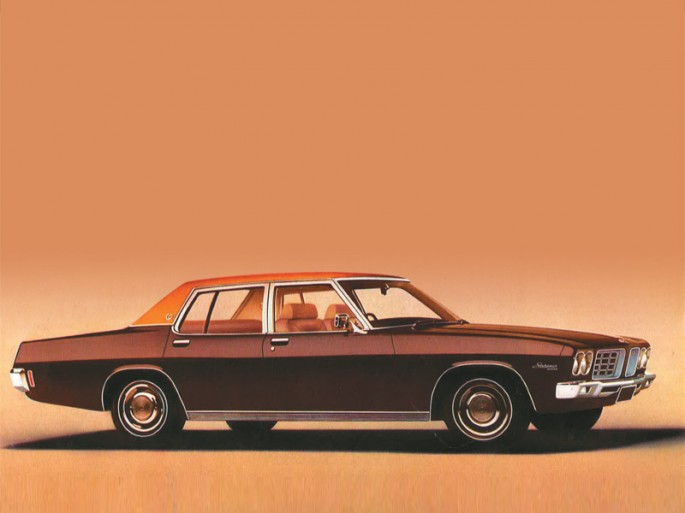 During his time in Australia, Schinella executed cars like the Holden Statesman

And then, in the following years, Schinella would move to Pontiac, where he was Chief of Design and continued that division’s performance legacy long after all the other GM divisions could only see their performance in the rear view mirror. He designed the black and gold “John Player Special” Bill Mitchell show car in 1973 and 1974 that would inspire the production design for the 1976 Trans Am LE and the 1977 Trans Am SE. 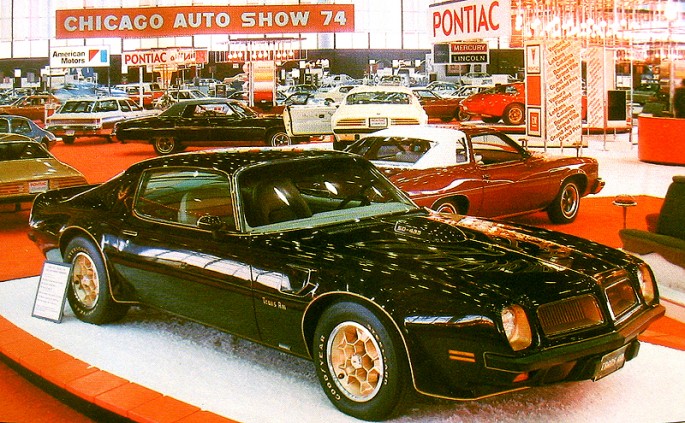 Schinella was desperate to have the gold Firebird decal that then-Chief Designer Bill Porter had used on the 1970 Trans Am concept on production Trans Ams. Schinella had a set of gold foil decals made up to be applied to the John Player Special car Mitchell was driving, and parked it outside Mitchell’s office. According to an article by Jeff Denison, “By pitching the hood bird to Mitchell in a color combination he already liked, Schinella sold him on the idea.” 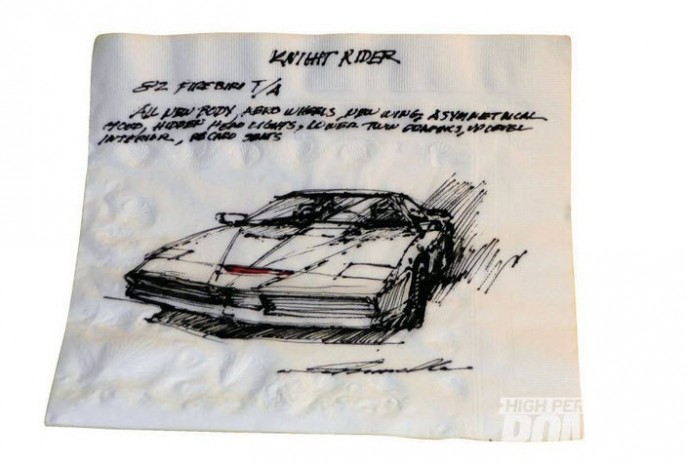 Schinella sketched the original concept for the K.I.T.T.’s roving red eye on a napkin shortly after the launch of the 1982 Trans Am.
Image courtesy High Performance Pontiac

Schinella went on to have a long career with Pontiac, Australia’s Holden, Saturn, Chevrolet and as the Director of GM’s Advanced Concepts Center in 1987. He’s been asked to speak at the Trans Am Nationals in 2009 and 2010, and says that the very idea that people are as interested in those cars as they still are today thrills him. “There were parents there with kids redoing Trans Ams as a family project. That’s enough to bring you to tears.”

5 thoughts on “Gearhead Guys You Should Know: John Schinella”