If You Don’t Believe That Anything Can Be A Race Car, Then Check Out The Tofu Drift Van

Dec 16, 2020Bryan McTaggartCar Features, OTHERComments Off on If You Don’t Believe That Anything Can Be A Race Car, Then Check Out The Tofu Drift Van 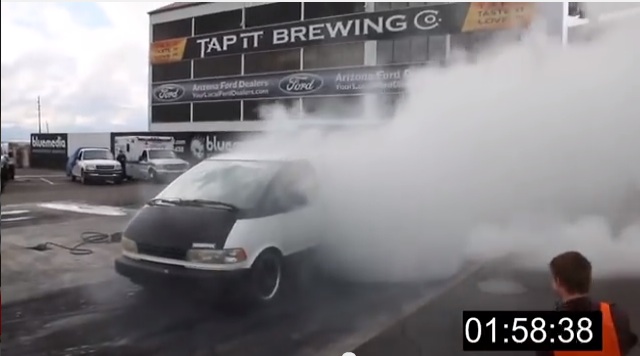 At one point in time a few years back Lohnes referred to me as “BangShift’s patron saint of automotive lost causes” in reference to the SuperBeater Dodge Mirada, and it’s something that I’ve worn with pride. I’ve always liked the idea of “dare to be different”, because it meant that instead of having to follow a template, you made your own template, engineered your own fixes and as a result, whatever creation you wound up with was that much more special. I’m known for saying that anything can be fun if you try hard enough, but I almost swallowed my words and my tongue the day I met this Toyota Previa at a Local Motors open house/autocross in Arizona several years ago.

The Previa is about the polar opposite of what most people consider hot rodding material: it’s overall body shape makes me think of a roly-poly bug when it’s not rolled up into a ball, it’s mid-engined, and even in supercharged form, it’s four-cylinder engine isn’t a powerhouse at 160hp. But don’t tell Paco, the owner, who beat on, drifted and raced the Previa, dubbed “Tofu Drift Van”, often. This isn’t a joke build, either, as the Previa is upgraded with a Silva rear subframe and a full roll cage. He’s also hinted at a Lexus V8 back in the day but had concerns about weight distribution and placement, which  seemed to have stalled that plan. Either way, this guy is having a blast with a Toyota minivan. What’s your excuse for not coming out to play?

Clean, Mean, and Not Too Lean: This 1960 Buick Electra 225 Convertible Is The Huge Stump Puller You Never Knew You Wanted Drag Racing Manifesto: It's Time For Some Real Talk On Radial Tire Racing - A Critical Crossroads Has Been Reached