A Dodge Ram Van Grand Prix Happens In Japan, And It Is As Weird And Cool As You Would Expect 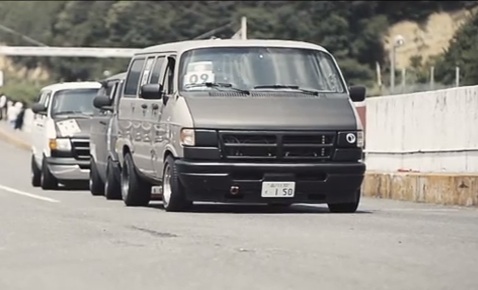 In the normal everyday world of the average BangShifter, an early 1990s Dodge Ram Van exists for one of three purposes: engine donor, parts hauler, or it is the neighborhood pedo-van that you keep watch for when your kids are outside playing. The Ram Van could trace its ancestry all the way back to the 1971 Dodge B-series van, which means that it outlived the other long-in-the-tooth Dodge truck, the D-series Ram, by eleven years. After that, most Americans could care less. In Japan, however, the later model of the Ram Van has a cult fan base. The build is referred to as “dajiban“, a play on “Dodge Van”, and the inspiration is one part race car, one part Japanese view of American life, and one part rape van. Don’t mistake these things for a comedy show, however. Built 5.2L Magnums, stripped interiors, cages, suspension work and a “must be Japanese” stance turns the Ram Van into…well, take a look at the video and see for yourself.

This Cross Between A 1947 Lusse Auto Skooter Bumper Car And An ATV Is Really Cool -- Can You Use It? Roadkill VS Gas Monkey Garage? Yes, This Is Happening And Richard Rawlings (Profanely) Says So

8 thoughts on “A Dodge Ram Van Grand Prix Happens In Japan, And It Is As Weird And Cool As You Would Expect”