Rough Start: This Effing Jeep Has The Best Argument For It Ever! 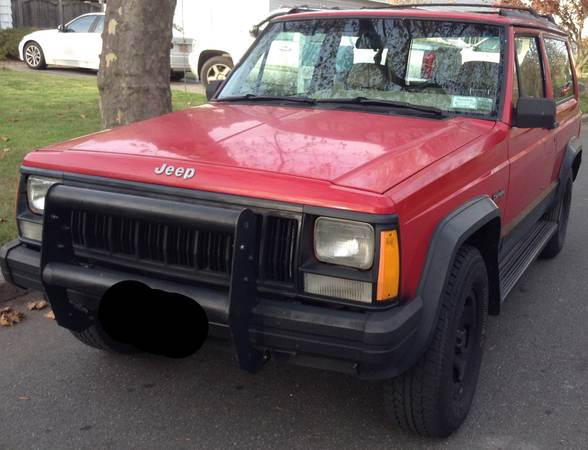 We here at BangShift do our best to keep our site family friendly…at least, we stay within a PG-13 area for sure. But catch us in person sometime…we all are human, and we all can easily let loose with the expletives if and when the situation arises. I’m probably the most guilty out of the three of us, and if you want to blame my military background, feel free. I subscribe to the methodology that General Patton used for his troops: “When I want my men to remember something important, to really make it stick, I give it to them double dirty. It may not sound nice to some bunch of little old ladies at an afternoon tea party, but it helps my soldiers to remember. You can’t run an Army without profanity; and it has to be eloquent profanity.”

So, let’s bring you to why an $800 1993 Jeep Cherokee Sport two-door has made it onto the pages of BangShift. Straight up, it’s not the rig so much. We like XJ Cherokees, they are good little rigs, but they are still common on the ground and this one only has a good price really going for it. No, it’s how the seller is offering up the Jeep…swearing like only a New Yorker can, descriptive as a novelist worth their salt, and bent on seeing the little XJ off, this Craigslist posting had me laughing like an idiot in the Dallas-Fort Worth airport as I was waiting to catch a flight.

From the ad, with just enough censoring to be acceptable for the page:

You want to test drive it? I want to see eight crisp, clean, 100 dollar bills before you touch the keys. My time is limited, don’t waste it.

Motor and tranny are in amazing shape, you gotta see it to believe it. Ever hear a straight six NOT make fun knocking/slapping/ticking/bitching noises? Holy shit you found a unicorn! Makes for a great donor for any Jeep dudes out there.

More pics to come. The one you see pictured above is from today.
Read my story below.

So this piece of shit has tried to kill me a bunch of times, but it hasn’t succeeded…yet.
I’d like very much for this little bastard to become someone else’s nightmare.

A quick rundown on our story:
Bought this POS for way more than I should’ve spent from some sleezeball.

Floors were MIA when I got this f**ker, but that’s okay ’cause that’s normal Jeep stuff. I cut the cancer out with a pair of gardening shears and dropped in some nice pre-cut floor pans in from Parts Geek. No, they’re not welded. This bitch is secured with about 150 self-tapping sheet metal screws to the bell housing and what’s left of the hard points. Made it air tight with some silicone fresh from the local wal-mart, and finished with a $9 can of candy apple red rustoleum for your viewing pleasure during the countless hours you will spend underneath this mockery of nature. Passenger-rear floorboard still needs to be done, I got some gardening fence keeping the carpet from sagging on to the muffler. Don’t worry, there’s so much asbestos in the carpet that it won’t ignite, it just smolders a bit and smells worse than burning gear lube. Not that that’s gonna happen anymore because the gardening fence will undoubtedly last longer than the rest of the car.

Seats are all there, and that’s about the only good thing about ’em. Driver seat is completely collapsed and the bucket is broke in half, so expect to be driving with that gangsta’ lean. Stuffed it with some crap I had lying around and supported the broken half of the bucket with a roll of paper towel and and the mount for the donut, so it’s “usable.” Good luck finding a seat, cause I sure as hell can’t seem to find one.

There’s a switch panel on the center console that was wired together with parts donated from a Ford Econoline Van, but something broke so the power locks don’t work. It’s got power windows, but the motor on the driver side failed and I can’t be bothered to replace that shit so there’s a crank on the driver side and a button on the console for the passenger side. You figure it out, IDGAF.
She’s got a remote start with ignition cutoff in case you want to let it warm up next to Pilgrim State, cause only a fucking lunatic would want to steal this piece of refuse. Keyring hole on the remote starter fob broke, so carry that shit around in your pocket, I don’t know.

Headliner’s gone, and at some point somebody painted the virgin mary on the section of bare roof right above the driver’s seat. Probably why I’m not dead yet…. 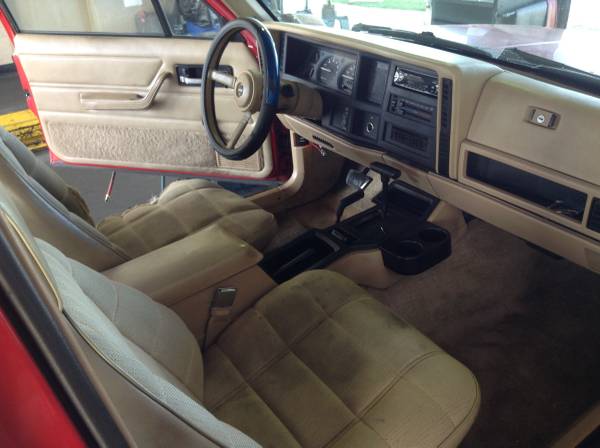 Aftermarket radio was top of the line… in 1995. It still gets reception and has a CD player that I never used. No aux port, so I have a neat little FM transponder for the driving music I use to drown out all the noises coming from the suspension. Ask nicely, and I’ll toss that in for you. It eats through batteries faster than CNN and Huffington Post can dig up dirt on Trump.

Double layered-weather strip on the passenger door to keep it from raining inside when it rains outside. Still leaks a little cause the broken gutter likes to dump rainwater right into the door frame. Your girl gets to slam it shut every time she gets out now so your neighbors will think that every time you drop her off you had a fight on the way home.

Rear wiper sprayer hose broke at the connector – 2min fix that Ricky from Trailer Park Boys could do but I left it broke cause now it sprays washer fluid about 6 feet straight back, works great in rush hour on 495 when that asshole decides that you and the fifteen cars in front of you need to get TF out of his way.

Exterior body is a’ight. Only has a small hole on the passenger side and some dents/dings. Paint’s obviously faded, the trim peels in some spots. It’s a Jeep.
Somebody welded a push bar to the fucking bumper. It’s as strong as the bumper. Don’t rely on it. Only use I could imagine is extra crumple room to account for the lack of airbags. Try not to crash.

Tires got plenty of meat on ’em, but one of them has some concerning dry rot. It’s held up for over 5,000mi without incident, but there’s a full size spare AND a donut in the back, just in case.

There’s a Flowmaster 44 Delta exhaust, literally the loudest f**king exhaust I could find because racecar. Previous owner took the cats out and sold it ’cause he’s a f**king sleezeball but hey it makes it sound like a boat. And not one of those pussy outboard motor boats. We’re talking get dirty looks from cops as you drive by, people GTFO of your way at 5000RPM, piss off your neighbors every f**king night loud. Muffler was the wrong size so there’s a bunch of reducers and adapters and shit. Clamped, not welded. Couldn’t be bothered to put the tailpipe on so it’s got a “down pipe” after the muffler. New tail pipe is in the cargo space, virgin. Exhaust is hung with a couple hangers of the automotive kind, and a couple hangers of the coat kind. It works. Flowmaster sticker on the back to make it go faster. You can listen to it (and watch fuel spray out the tailpipe) HERE. 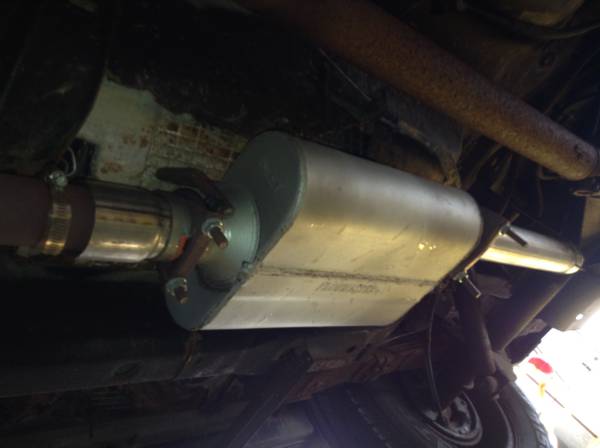 Be warned, the drone is so nasty that trying to hold a conversation at low range rpm (think overdrive gear around 40mph) is like talking into an industrial fan.

Engine is f**king awesome, cleanest straight six you will ever see, I promise you. Only oil leak comes from the drain plug that I couldn’t be bothered to replace. You can grab a flashlight and check out the gaskets yourself, you’ll be amazed. Tranny shifts smoother than that chick you diddled back in high school. I replaced the entire cooling system short of the heater core, which was omitted by the previous owner – both verbally and literally. If you plan to use this as a winter beater get acclimated with hypothermia because trust me it’s not fun. 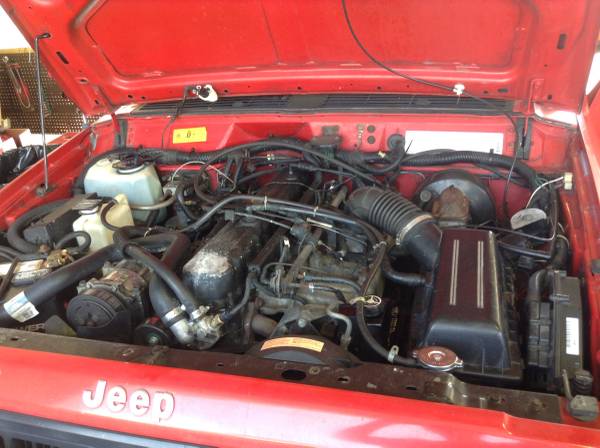 Brake line blew a few weeks back, replaced that shit right quick, got some fresh line in the cargo area for when other lines inevitably off themselves. Front brakes were done a couple months back, rear drums have been virgin up until the other week cause they were adjusted wrong and were never f**king used. Don’t worry, there’s no ABS either.

Suspension needs attention, leaf springs and sway bars got f**king barnacles growing off them because NY hates Jeeps. If you listen close as you go over bumps you will hear this car saying “f**k you” under it’s breath.

Only time it’s ever had a check engine light was when the battery took a shit, cause apparently that’s when OBD-I cars like to tell you somethings broke. New battery, less than a year old.

Previous owner butchered the power steering bracket (aka chrysler belt tensioner, those fucking assholes) and the idler pulley bracket so all that shit hand-grenaded a month after I bought it. Bored out the bolt holes and rebuilt them, haven’t needed to touch the belt/pulleys since. Fan shroud hardware broke off and the mechanical fan proceeded to eat it, so no fan shroud. New fan clutch though!

Four wheel drive works amazing. No seriously, the drivetrain is awesome. I change the gearbox fluid frequently so the gearboxes are in very good shape. Replaced a couple U-Joints.

Not desperate to sell this POS for a few reasons:
1. It’s loud AF and I love pissing off my family.
2. I only really have time to entertain you CL folk once or twice a week.
3. Most importantly, the parts are so bottle-deposit-at-Pathmark-to-fund-my-drinking-habit god damn cheap that the hardest thing about maintaining this thing is getting access to a lift to replace parts every other god damned week.

Stop reading this garbage and buy the damn thing. It’s worth it.

Feel free to text me with any questions you may have. Just don’t do it at 3:00am. 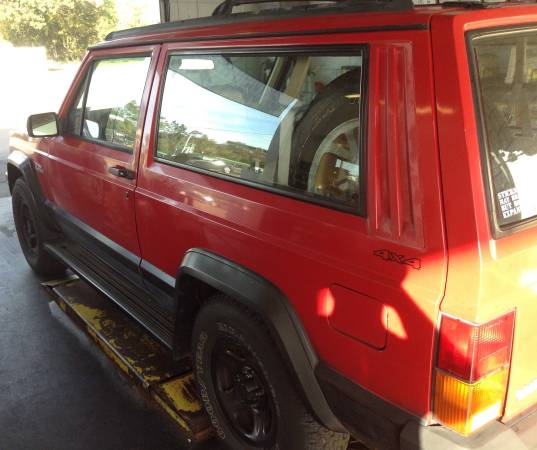 100 Years Of Chevrolet Trucks: This New Commercial Is Pretty Awesome Wether You Like 'Em or Not! Bad Goat: This Pro Street 1966 GTO Owned By Hollywood Bobby Is ANGRY - Watch It In Action

3 thoughts on “Rough Start: This Effing Jeep Has The Best Argument For It Ever!”