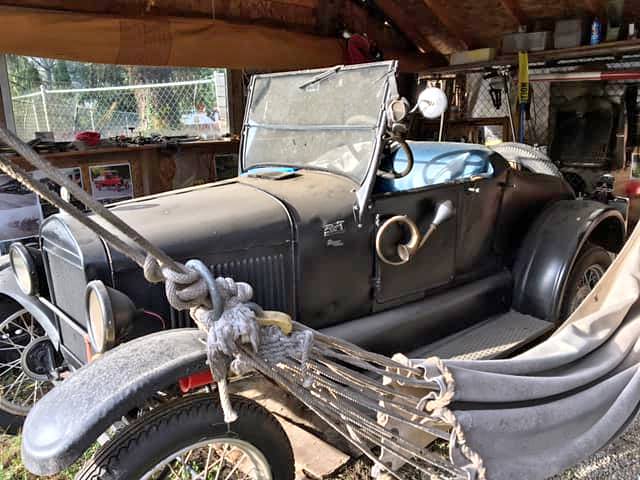 Buckley, Washington is an interesting little place that’s nestled right at the edge of the Cascades in Western Washington. Some of my stepfather’s family lived around the area, and the last time I saw that town I was racing a cargo van full of soldiers through the city limits in the middle of the night with a police escort…long story. For most people, the only thing they might know about Buckley is that hot-rodded Caprice cop car from the Chris Farley movie “Black Sheep”. Oh, haven’t seen that one? Eh…when Gene Siskel walks out of a movie, it kind of says something, doesn’t it. Ah well, moving on…

The Pacific Northwest is a gem of a hunting ground for interesting builds. The cars don’t quite rot, don’t quite dry out. You might find a little rust, you might have to replace a door panel or two, but on the whole, things stay together, even more so if they’re sheltered from the near-constant barrage of rain. So seeing a 1926 Ford Model T isn’t a big shock. Seeing one wearing wire-spoke wheels and still sporting the side-mounted squeeze horn is a bit more impressive, and with full interior that looks intact, it’s impressive. But then we get to the description on this one-photo wonder and that stopped us dead in our tracks. Rotary powered?!

If anybody knows anything about this old-timer, and can prove that there is really a Dorito-powered noisemaker underneath the hood of this Tin Lizzie, we want to know more about it. A lot more. Like “Who scared the crap out of themselves trying to put power down on those skinny-ass tires?”, for starters.

Thanks to Aaron Christensen for the tip!