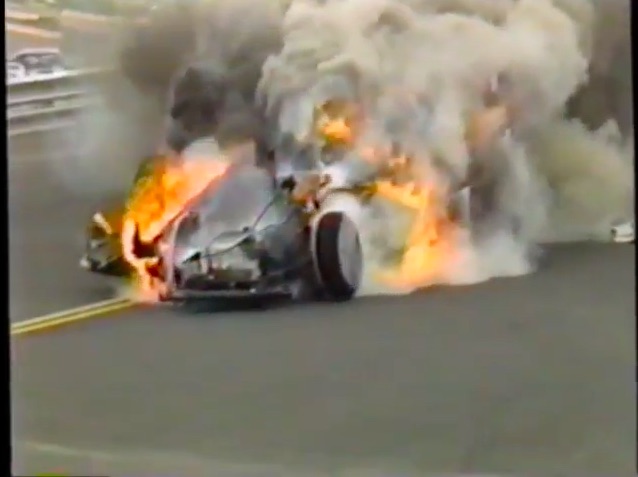 As you will see, Gay Jr. was pushing the limits of traction and control in his Firebird funny car when it began to spin the tires and made a very hard move to the wall. The car went in and hammered the wall, driving Gay’s skull into the roll cage and knocking him out. It also send the fiberglass body into the engine and wedged it there. The heat of the engine ignited the fiberglass and an unconscious Gay was at the helm of a flaming ghost ship of a car as it slowly wandered across the track and hit the other wall. Believe it or not, it only gets worse from here.

Now having been on fire for a long time, the car rolls to a stop and just as safety crews were coming up onto it, the still charged fire bottles, which Gay had not been able to release, exploded in a fury that completely finished off the body and made his situation even worse than it had been earlier. The NHRA Safety Safari along with a still firesuit clad Don Prudhomme extracted Gay and incredibly he was able to make a full recovery from this. The amount of heat and smoke he endured defies comprehension.

It is startling when you see the fire bottles explode. It makes sense, right? Corked up and roasting the pressurized material in the bottles needed some way to escape and the bottle itself gave way. Ironic that the fire bottles themselves actually contributed to the severity of this one. Incredible.

At Least It's Cheap: This 1985 Nissan Truck Is One Of eBay's More Odd Items For Sale At The Moment Awesome: Watch The VW ID.R and The McLaren F1 Runs Up Goodwood Side By Side 20 Years Apart