69 Photos from the NHRA Twilight Cruise 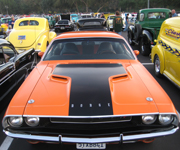 The Wally Parks NHRA Motorsports Museum in Pomona, California, offers a Prolong-sponsored Twilight Cruise on Wednesday nights during the cruising season here in SoCal. That season ends for about 15 minutes starting now, and so we attended the last-of-the-year event at the museum yesterday evening. Oddly, though the Twilight Cruise has been going on for many years, we’ve never attended before because we’ve been too employed to make it out there on a Wednesday. As a result, we ended up seeing many cars that were to us. See 69 photos of those cars here in our photo gallery.

For info on next years’ Twilight Cruise season as well as events at the NHRA Museum, stay tuned here.