Dec 04, 2008Brian LohnesBangShift NewsComments Off on IHRA Sticking With 1,320 Feet; NHRA Not 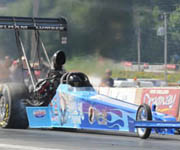 The IHRA is not going to follow the NHRA’s lead when it comes to the length of competition runs at its national events.

The sanctioning body sent out a release Tuesday stating that its series would be contested on the traditional quarter-mile, not the 1,000-foot length that the NHRA has reduced its nitro categories to.

The decision makes some sense on a couple of levels and for a couple different reasons. First, the IHRA does not have near the issue with speeds that the NHRA does. At base, nearly all of IHRA’s nitro competitors are self-funded or have minimal sponsorship in comparison to the guys (and girls) that run on the NHRA side. Thusly, the organization is not faced with 320-330–mph race cars on a regular basis. Most IHRA Fuel cars run in the high 290 to low-300-mph range, they just don’t have the gusto that the fulltime “big show” racers have. There are a couple guys who can uncork a 320-mph lap, but they are not the norm.

From a marketing perspective, the IHRA can highlight that they still run “the whole track” and appeal to the traditionalist fans of the sport who were up in arms about the NHRA’s move to go the 1,000-foot route.

With all the rest of the junk going on with the IHRA between its sale to Feld Motorsports, the lack of a series sponsor, the loss of its nitro funny car division, and now rumored lack of a season-long points fund for professional categories, this is a dim light in a sea of darkness.

Here’s the entire release from the IHRA: