Up here in the Boston MA area, we don’t have a lot of automotive flea markets and swap meets regularly like many other parts of the country do. For this reason, every gearhead in the area circles the date on the calendar in early May for the South Shore Antique Auto Club’s Trading Bee. I always hit this one up every year. Although the Town of Mansfield put up a fight this year due to safety concerns stemming from some supposed after hours shenanigans last year, the event went on as planned. A friend of mine and I piled into his truck, tossed my Radio Flyer All-Terrain Wagon in the back, and we hit up the event looking for deals and general weirdness. And, as usual, we found both! Check it out! 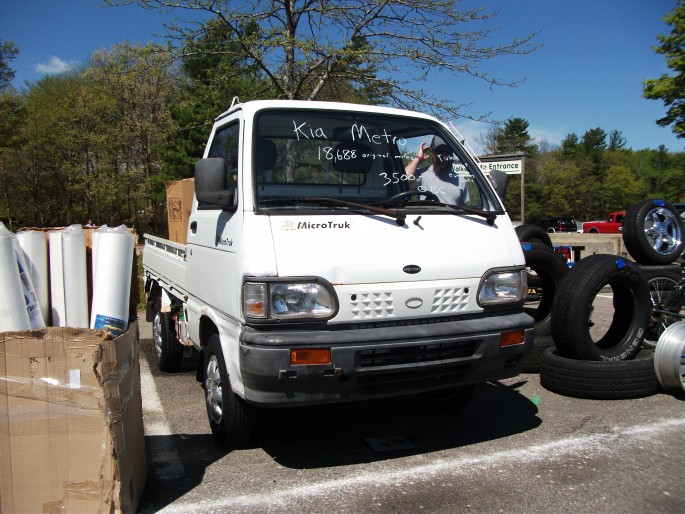 Here’s one of those little Kei-sized trucklets that are very popular in Asia that I found for sale. This one was a Kia Metro according to the windshield. The owner’s dad bought it for doing stuff around his yard, but he was having some health issues that prevent him from operating the clutch, so up for sale it went! The price was a little optimistic, but the guy said if it didn’t sell, he’d attempt to stuff a V8 back there. I voted to do that! 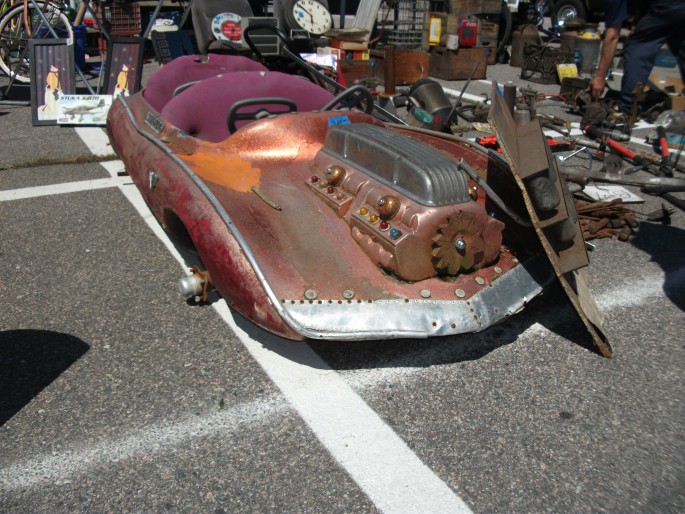 This thing was a bit strange, but all sorts of cool. My guess is that this was part of a former ride at the now-defunct Paragon Park in Hull, MA. Every once in a while around here, you’ll see a yard sale or flea market where stuff like this pops up. In fact, my dad bought a weird (but not this weird!) electric go-kart when the park closed and they auctioned off many of the rides to the public. In any event, this thing has that early 60’s Kustom thing going for it. Dig the old-school finned valve cover on the V-16 tumor sticking out the front! 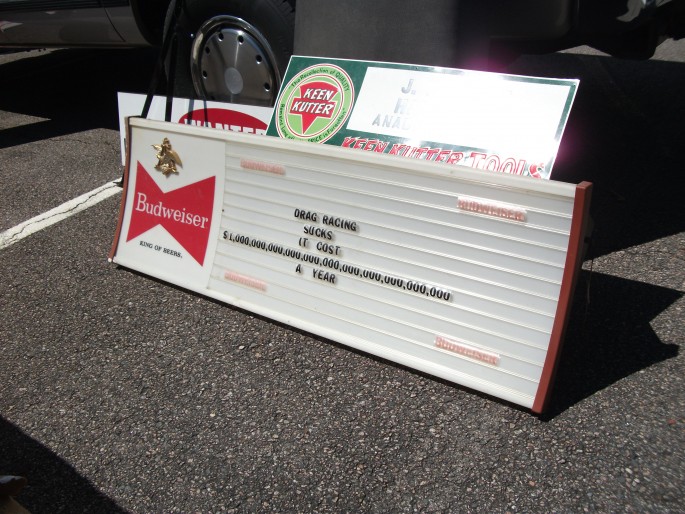 Hey Lohnes, what are your thoughts on this sign? The satirical seller sure got a good laugh out of it. 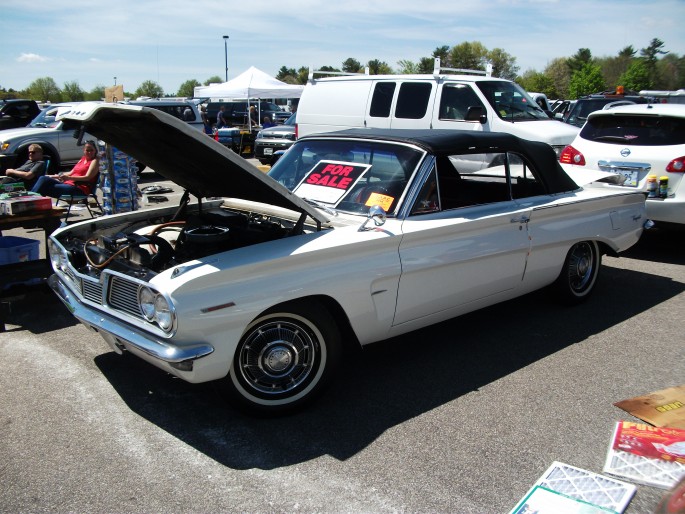 As we were making our way around the seemingly countless aisles of parts, I was having a conversation with my buddy about how a local seller was trying to pass off a 1965 Tempest Custom 4-door as a “real GTO with a 326 Tri-power”, and I was saying that it would be just like saying that they made a 1962 Tempest GTO with one of those half-a-389 four cylinders. And BAM! It was like this thing appeared right out of my thoughts! Weird. 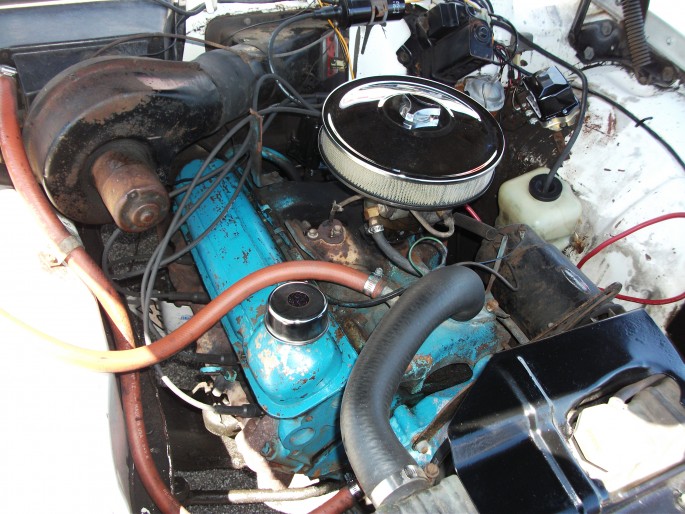 And yes, it even had that weird 4-cylinder too! I’ve heard that most Pontiac V8 parts, like heads, rods, and pistons, fit these oddities. I’ve always wondered what it would be like to hop one up. The seller was getting on my case for taking pictures, so off we went to the next row. This became a theme for the day which I will revisit… 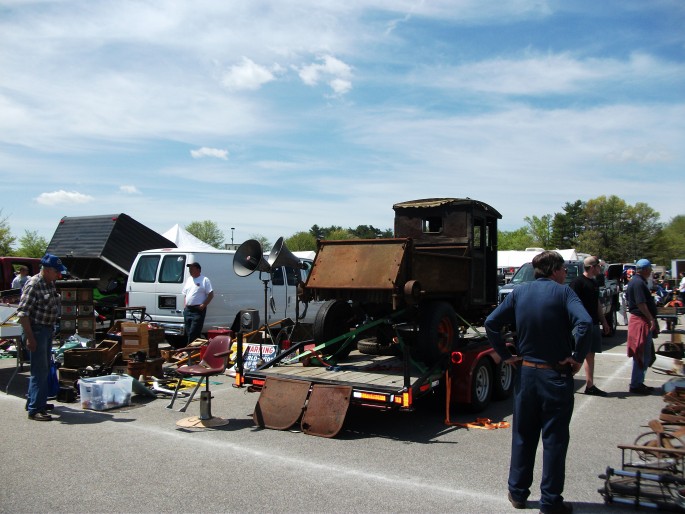 I honestly have no clue what this was, but my friend’s guess is that it was a former sand truck due to the flaps under the bed and the attached machinery. I think he might be right. What do you think? 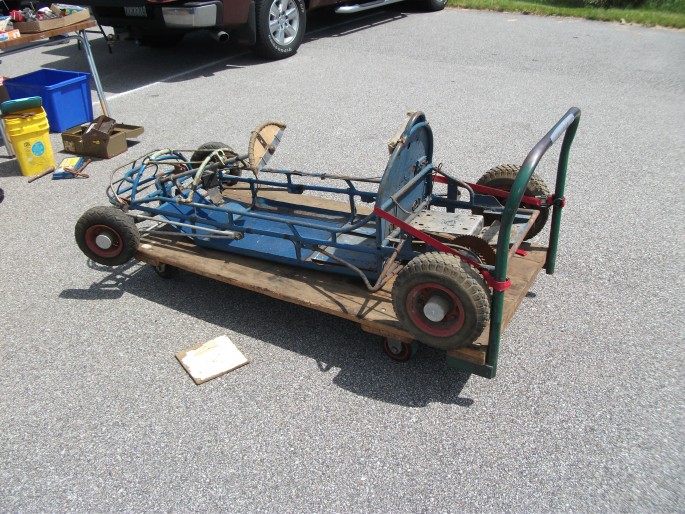 This vintage kart looks like it could be a lot of fun. Strap an old Tecumseh 8hp Snow King sitting under your dad’s work bench on the back and spin those knobbies until they are slicks! At least that’s what I did when I was a kid with my old go-kart. I can confirm that it was a blast! A straight axle ’57 4-door wagon sitting high and mighty? Don’t mind if I do! This thing was CLEAN. I didn’t even bother looking at the price, because shiny Tri-5 wagon + gasser awesomeness = re-mortgage the house. 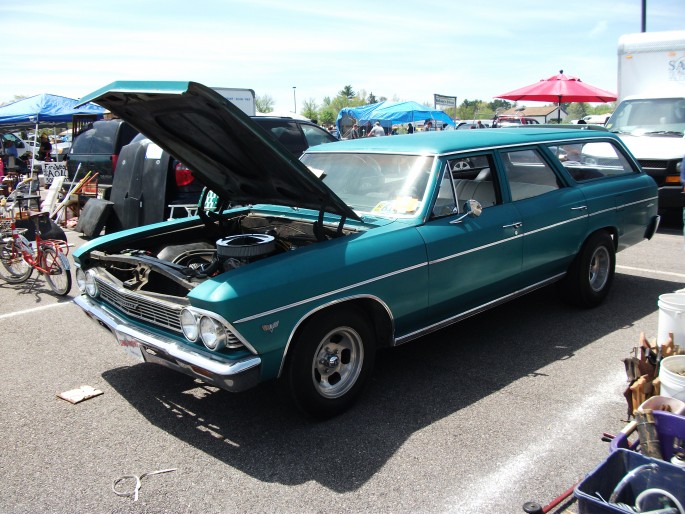 Speaking of awesome Chevy wagons, this 1966 Chevelle wagon caught my attention with its honest patina and slotted mags. A-Body wagons are just so cool. The seller was asking $11,500 for it, and it was in pretty decent shape. 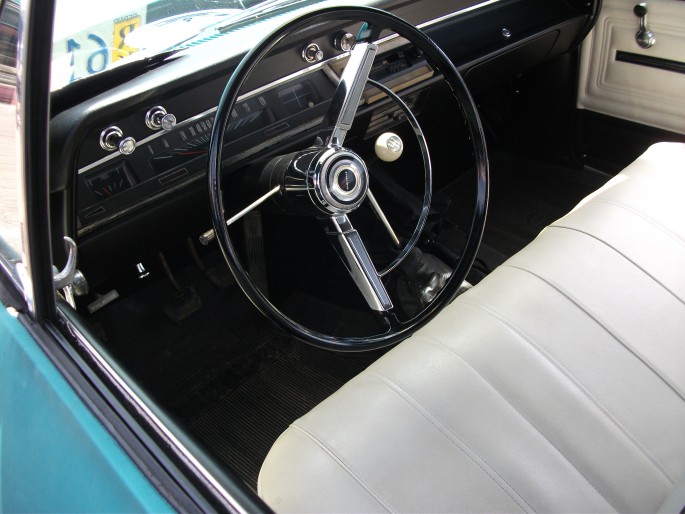 There is nothing cooler than a 60’s intermediate wagon with a bench seat, three pedals, and four on the floor. The want was very, very strong for this one. 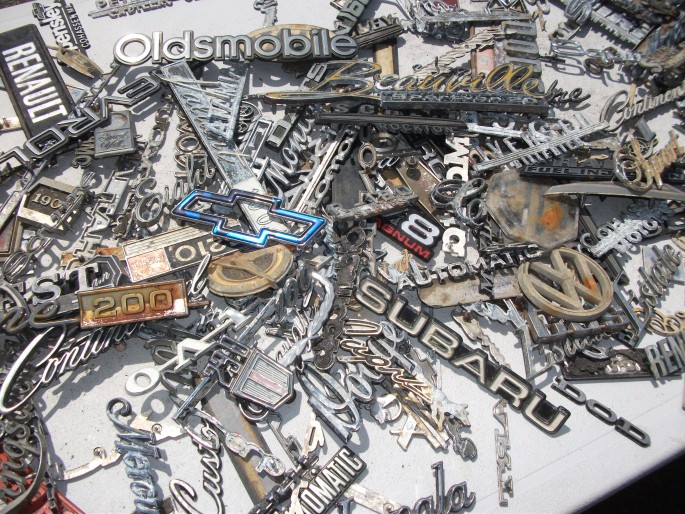 I think I spent more time sifting through this table of old car emblems than anywhere else. They were selling them 3 for $5.00, so I had to pick up a few. I also noticed that the word “Grand” was in this pile so many times since that word meant “Luxurious” in 70’s and 80’s car speak. Pontiac was especially “Grand”, with the Grand LeMans, Grand Prix, Grand Ville, Grand Am, etc. I was thinking of making my yard truck Dakota a “Grand Dakota” with one of these badges for laughs. A Hovercraft! I always wanted one of these as a kid, but the closest I ever got to one was playing with my friend’s Tyco RC Typhoon. Apparently, you need a boat license to operate one here in MA. Who knew. This 1947 Flxible bus-turned-RV was in impeccable condition and powered by a 5.9L Cummins. I can’t think of a cooler way to tour the USA. This one was a keeper, and the guy who owned it was not entertaining offers. I don’t blame him! 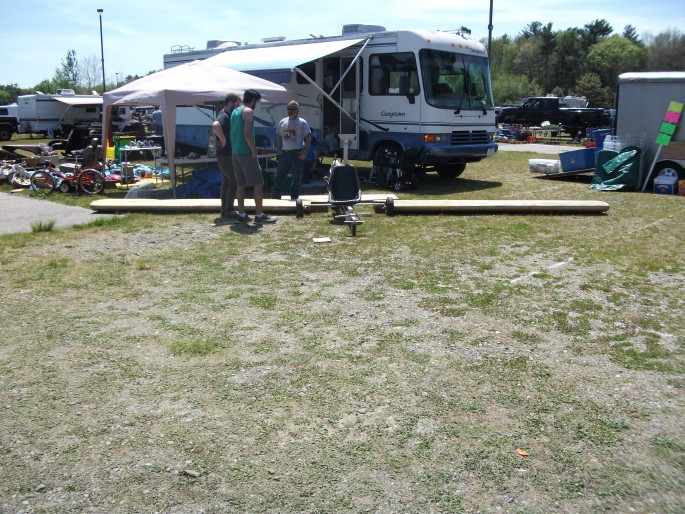 For the truly insane, there was this DIY airplane kit for sale. I’d like to think that the seller thought it was a good idea at the time of purchase and then came to his senses. 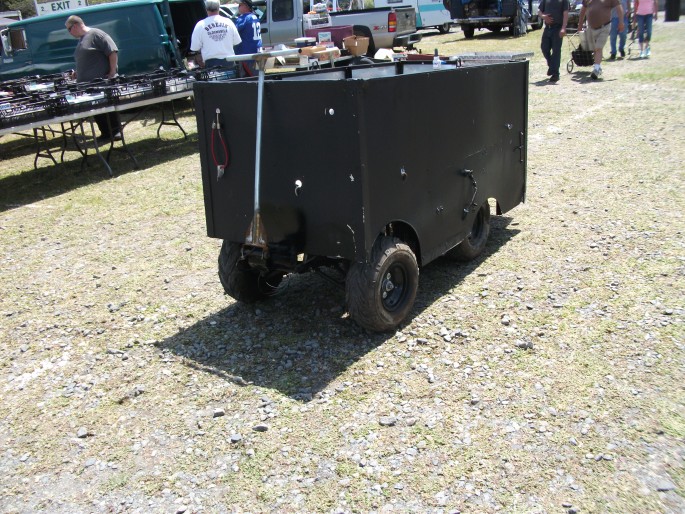 One of the best parts of the swap meet every year are the pit carts people show up with to haul around their newly found treasures. I saw this behemoth tooling around the place with a couple of guys, and it sounded like it had an engine in it. One guy was holding that big handle, and the other kept reaching his hand inside. I had to get a closer look. 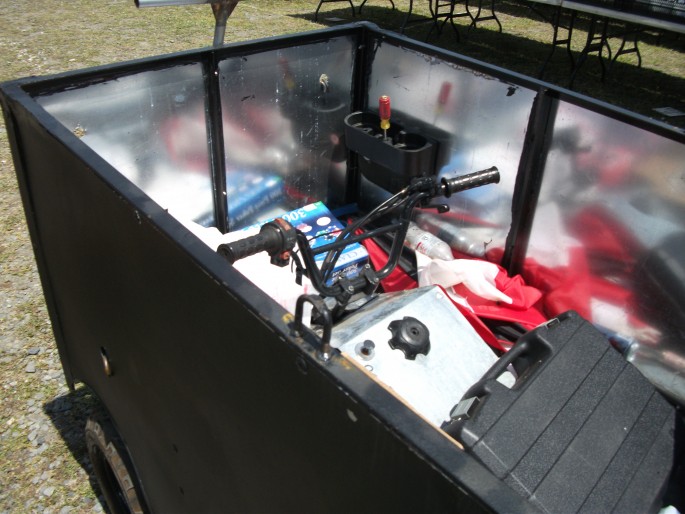 Well, that explains it! These guys basically built a big box around an old quad and use it to haul their stuff. It could also double as a pit bike in a pinch, or a small war wagon after the bombs fall someday and madmen looking for gas and oil rule the wasteland. Love it! Here’s an idea I saw more than once at the event. Take an old ride-on mower, ditch the presumably rusted mower deck (this is New England after all), weld on a shopping cart basket, add one of those construction site stereos, and you have yourself a badass swap meet wagon! This guy was clearly doing it right. I thought this tank-treaded wagon was really cool, but the guy who presumably made it was not too happy that I was taking pictures of it (I told you I was going to get back to that). The guy had some choice words to describe me while discussing with his friends why I was taking pictures of his wagon. And yes, I heard every word, and I’ll take some of the comments about my manhood under advisement. But hey, the wagon is cool, right ? One of the reasons I came to the swap meet, other than to chronicle it for you readers, is the lure of a good deal. I always keep an eye out for parts for my ongoing 1979 Trans Am project car. Unlike past years, where I mostly poke around and go home empty handed, I actually bought some stuff! A guy toward the end of our circuitous route through the lot had these 2nd gen F-Body doors among some random parts he was selling. They were a little banged up, but they were rust free and still had all the hardware and glass intact. I’ve heard that due to the body lines, Camaro doors fit only Camaros, and Firebird doors only fit Firebirds. Thanks to modern technology (my smartphone), I grabbed the VIN and build date off the door tag and identified them as doors off of a late 1977 Firebird. With that out of the way, I snagged them both for $100. I’ll likely have to re-skin them, but they are in better shape than the ones currently on the car. Even the always-broken door handles are in nice shape. Considering another vendor was selling a gutted set of doors that needed just as much work for $500, I think I did well. Score! Total haul for the day: one pair of rust free Firebird doors, a cheap set of almost new tall Pontiac valve covers with terrible “350 Hi-Performance” stick-on badges on them, one 14″ drop base air cleaner base for my “Let’s make my Trans Am’s shaker great again!” project, a 70-81 F-Body console box, and one screen bezel from a Donkey Kong arcade machine to be used as game room wall art. Not pictured are a Pontiac nose crest for something from the 70’s, a Pontiac OHC Six badge, and a Mazda RX3 badge. Including the doors and $10 admission to the event, I got out of there for under $150. How did I do?

Other than my parts haul, I took away three things from this year’s swap meet:

1. The Mullet sub culture is alive and well, and might even be making a comeback! I saw no less than FIVE spectacular specimens, including the classic “No Choice” Skullet, the Prog Rock Permullet/mustache combo, and a guy that could very well have been a botched clone of 1980’s NFL star Brian Bosworth. I didn’t dare take pictures because…

2. People were not in a good mood, and didn’t like someone walking around with a camera. I usually expect some flak from people when I go to this event and take out the camera ( I get it, not everyone wants their picture taken), but someone really must have peed in collective cereal of many of the people there. Whether it was the higher vendor price or the added police presence, the inner ass came out of a lot of people there, especially when the magic picture device came out. One younger fellow was talking with his friends about whether he could take me on in a fight. Most of his friends sided with me, but he was looking like he wanted to find out. For taking a picture of a cool looking object, NOT him or his friends. Fantastic.

3. This may have been the last South Shore Antique Auto Club Trading Bee, and that makes me sad. These guys have been doing this for a long time, with barely a problem had. I spoke with a really nice lady coincidentally named Mrs. Nice, and she said she had worked at this event for 25 years and looks forward to it every year. It started out as an antique car swap meet for prewar stuff, and has grown to include post war, muscle car era, and modern stuff, with everything in between. Since there were supposedly complaints about people camping at the event and causing trouble, they had to raise the vendor costs to $80 this year to presumably help pay for added security and insurance. That added cost made a number of vendors skip the event altogether. There were signs posted everywhere banning the use of motorized pit bikes, pedal bikes, and they even banned dogs. I noticed a heightened police presence as well, and still saw plenty of bikes and dogs all day, but the tension was there.  If this really was the final event, then I truly feel bad for the club, because they seem to be good people that just want to preserve old cars. My inside sources tell me that despite all the tension, nothing serious went down this year after hours, so we’ll see what happens for next year.

Were you there at the event this year? Did you score anything good? Did I do well with what I scored at the event? Let us know your thoughts below!

Jay Leno Gets To Shake Down The Predecessor To The 440 Dodge Police Car, The 1961 California Highway Patrol Polara! GALOT Motorsports Park Battle Of The Engine Builders 2016 - A Nitrous Throwdown For The Ages