Swap Meet Madness: Check Out What We Found While Bargain Hunting! 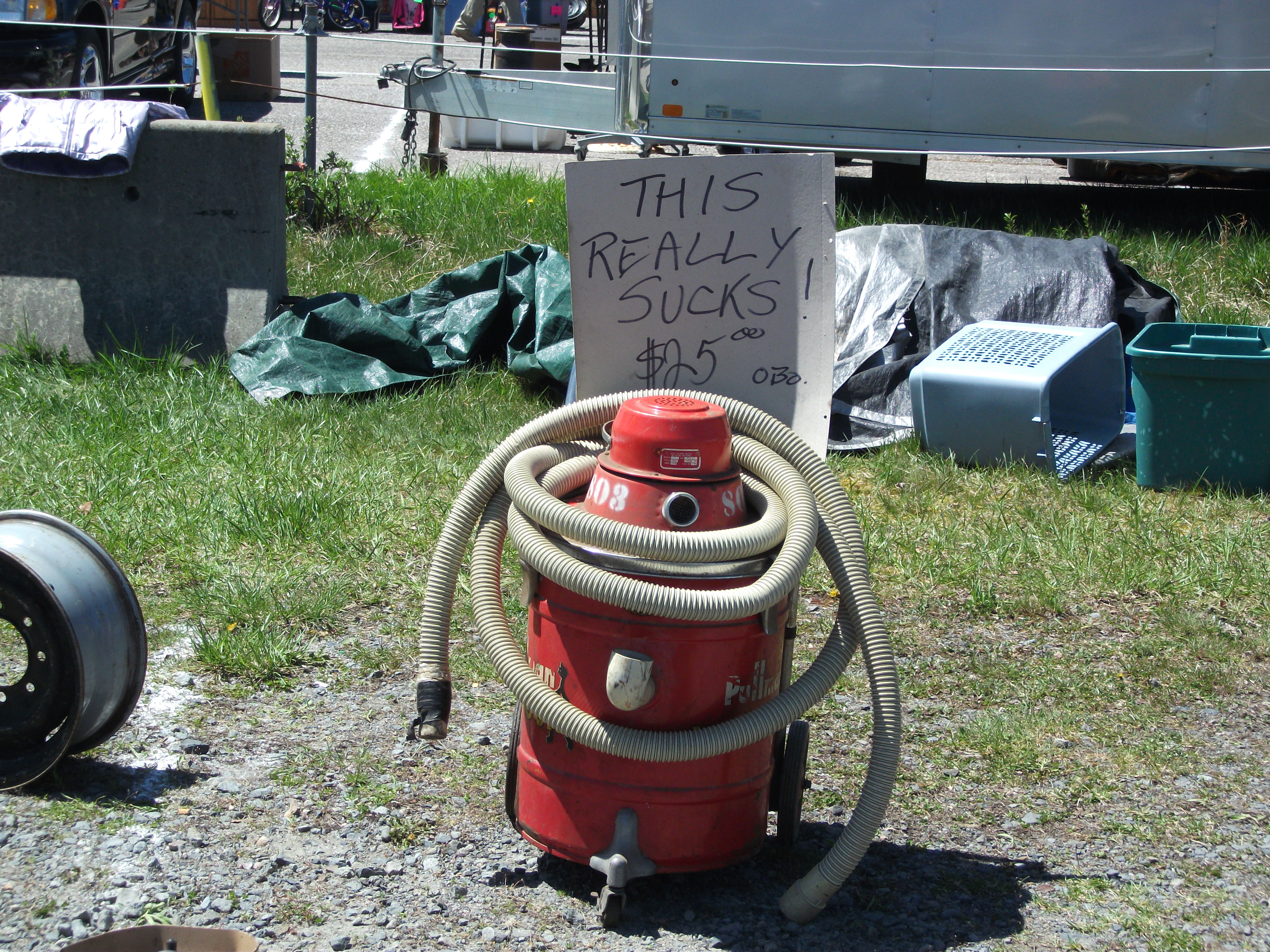 (Story and Photos by Tony Sestito)

Recently, I paid a visit to the annual Automotive Swap Meet in Mansfield MA. While many areas of the country have awesome monthly or even weekly swap meets, this is really the only one that is held near Boston, MA. Chances are if you are reading this right now, you’ve been to a swap meet trying to chase down parts for a project, trying to find a new project, or just hunting for a deal. I am a bargain hunter by nature, so I love events like this. They are part yard sale, part junkyard crawl, and part carnival side show, and I love every minute of it. I took a camera with me this year, and here are some of the more interesting things I saw during the day. Check it out! 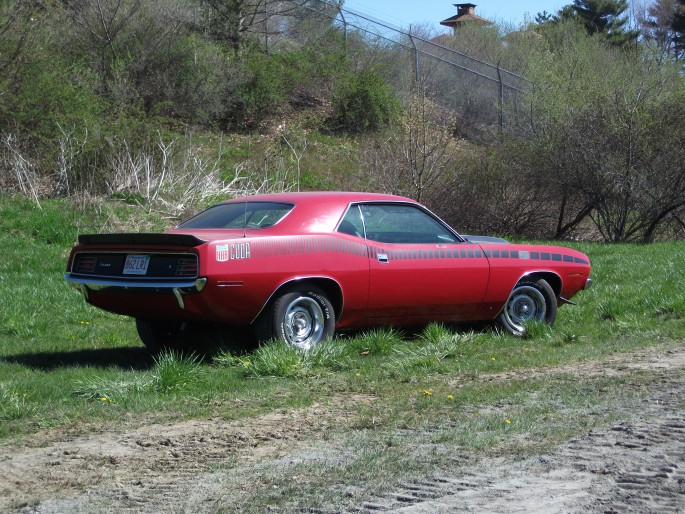 One of the best parts of the event is the stuff you see in the parking lot. About five seconds from hitting the dirt, I saw this lovely display of blatant Mopar awesomeness. I don’t know if it was a real AAR ‘Cuda or a clone, but I wanted it! 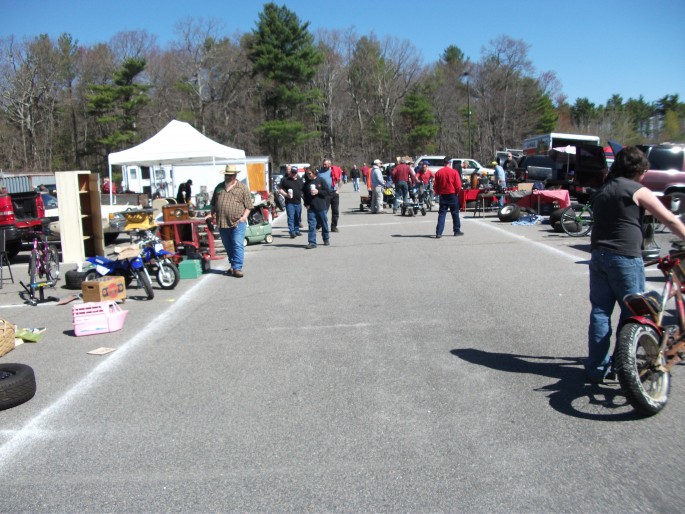 Take this row, and multiply it by A LOT. This is a HUGE swap meet, and takes up two parking lots at a very large outdoor concert venue. 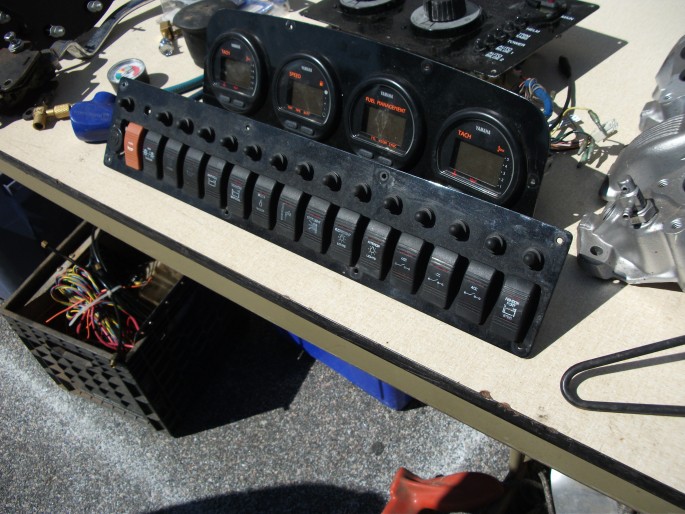 I don’t know where this switch panel came from, but I wanted it. If it were mine, I’d hook up every switch to a nitrous bottle. That’s 15 bottles. Big ones. 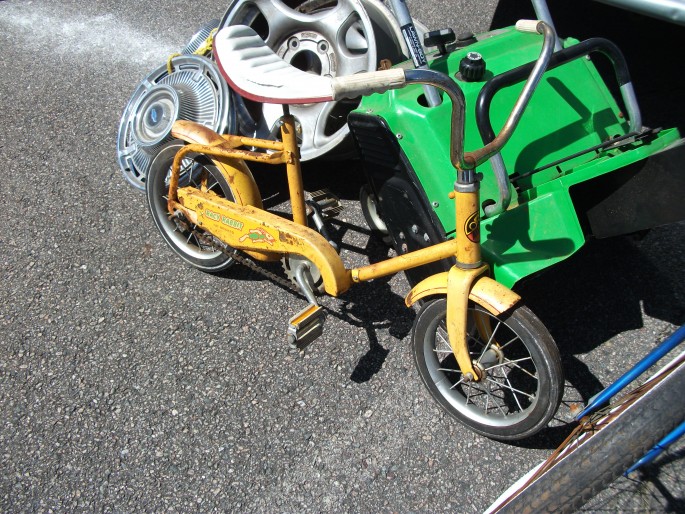 The place was full of old bikes, wagons, and other things with wheels. This little guy was cool. Wait… what does that decal say? 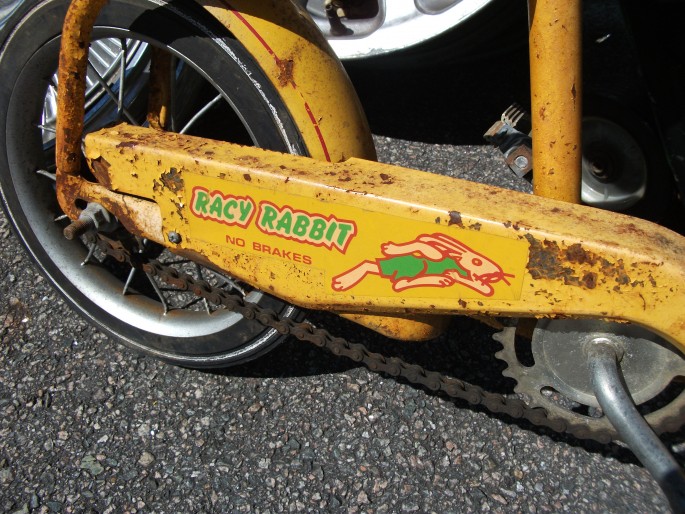 “Racy Rabbit – NO BRAKES”… Ha! Imagine a company releasing something like this in this day and age. 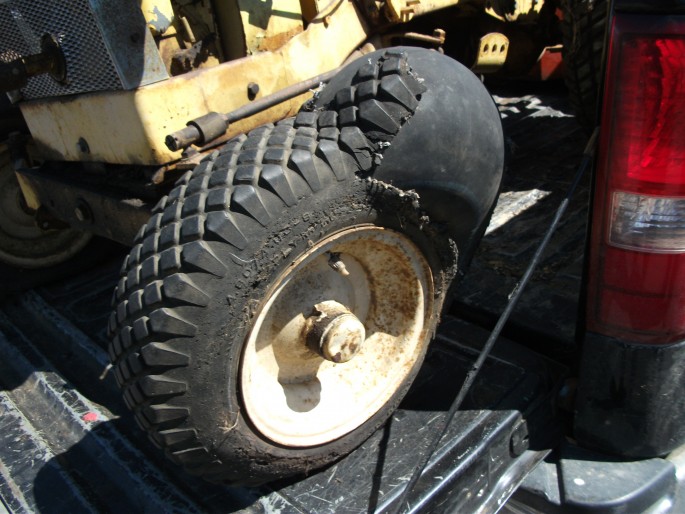 This tire was on an early 1960’s Allis-Chalmers Big 10 garden tractor someone was selling for a lot of money. Just a hunch… I think it’s time for some new tires. 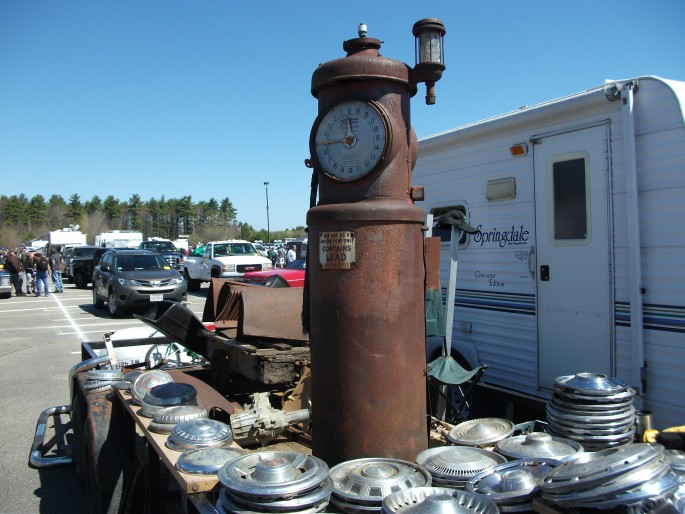 Like many gearheads, I love old gas pumps. I am no expert on these, so I couldn’t tell you what this one was, but it looked early and I want to put it right in the middle of my backyard as a monument to the car gods. Very cool. 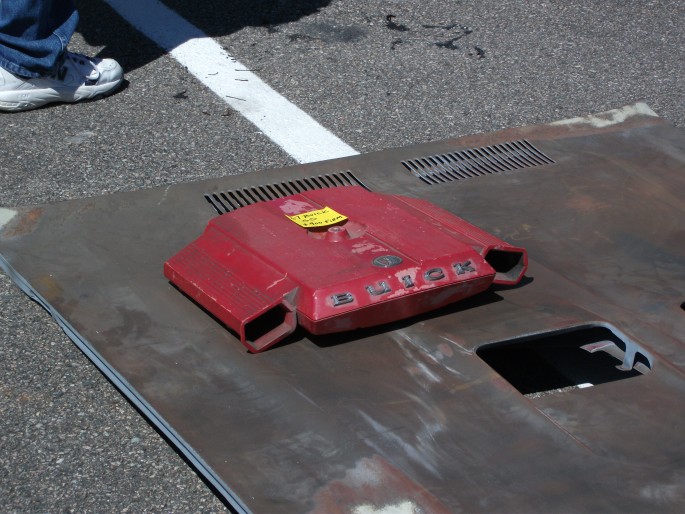 Hey, it’s a Buick “Star Wars” air cleaner from a ’67 Grand Sport! These usually trade hands for a lot of money, so I wasn’t surprised at the $400 price tag. 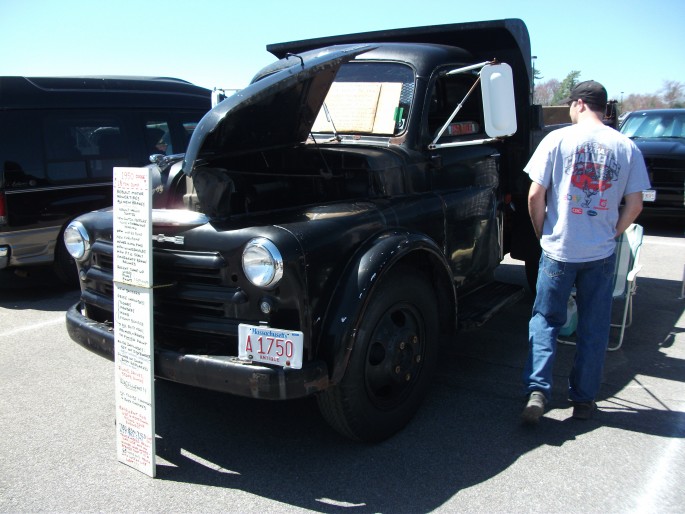 This one is Bangshift approved for sure: It’s a 1950 Dodge 1 ½ Ton Dump Truck. It was big, old, and cool. It seemed mostly original, and the older gentleman selling it looked like he enjoyed it for years. 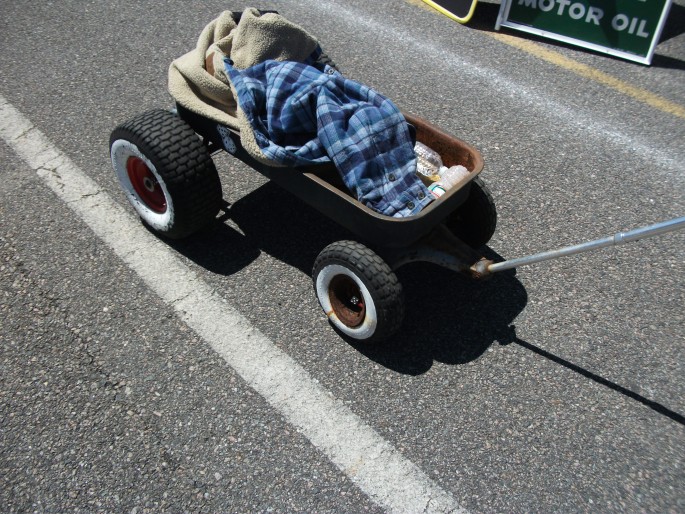 One of the best parts of the swap meet were the modded parts-hauling carts and wagons. Here’s one with a mean rake and some “white walls”… 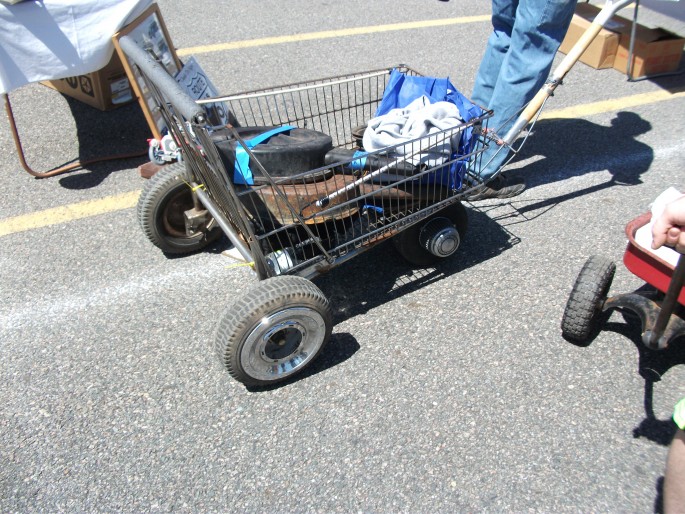 …And here’s another one, made from a sectioned and lowered shopping cart. 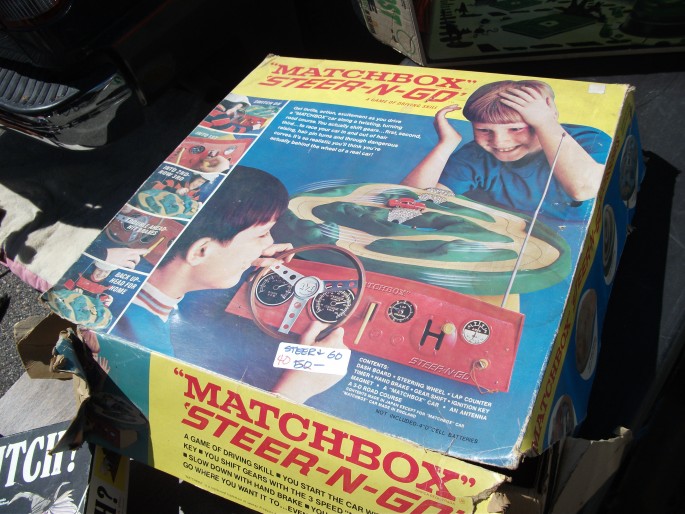 There were tons of cool old toys for sale all over the place. I bet Brian Lohnes had one of these bad boys growing up. 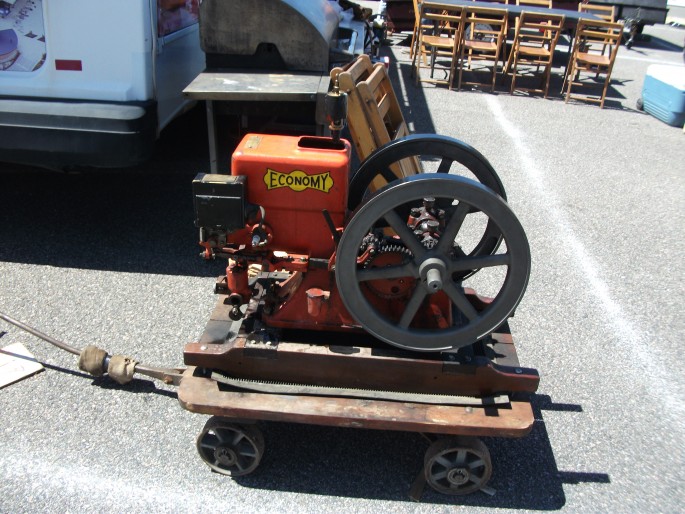 Hey, a “Hit and Miss” engine! There’s usually a seller at the swap meet that brings out a bunch of these old industrial engines, which only fire when the flywheel speed gets below a certain RPM. Those guys weren’t there this year, but this engine was. I want to power a 24 Hours of LeMons car with a few of these. 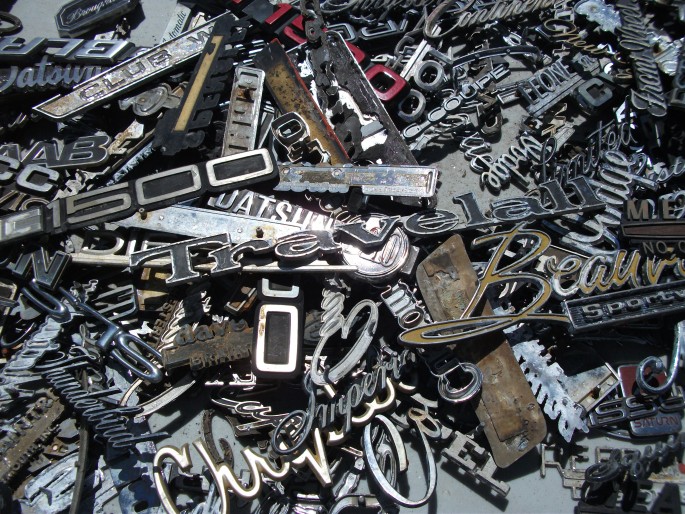 A guy had a pile of random emblems for sale, and some of them were from cars I haven’t seen in years. 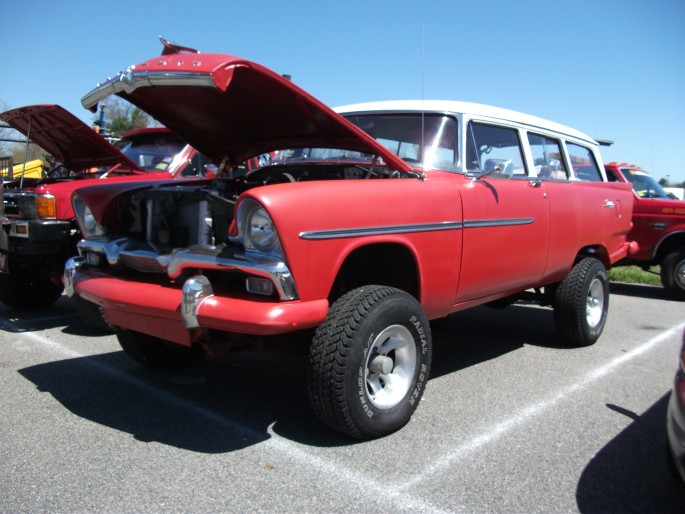 This 1956ish Plymouth Suburban was riding on a 4×4 truck chassis, and while I’m not always a fan of the “Trar” creations people cook up, this one just did it for me. It was a little rough around the edges with some body filler here and there, but it would be a cool all-weather parts hauler. 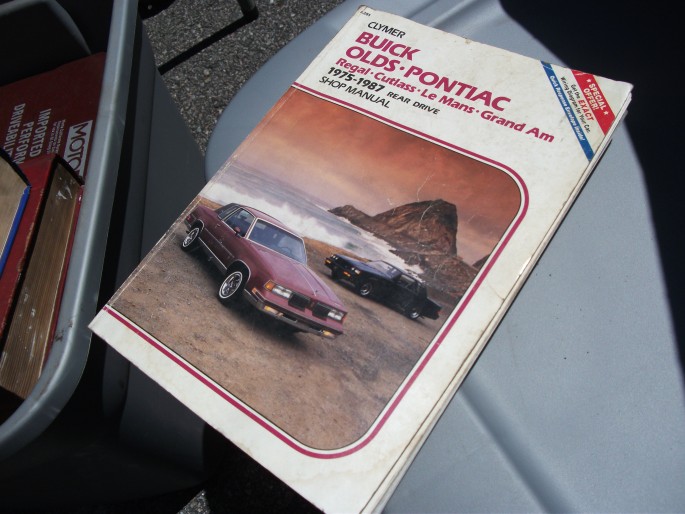 I don’t know where this magical G-Body beach is, but I want to go there. 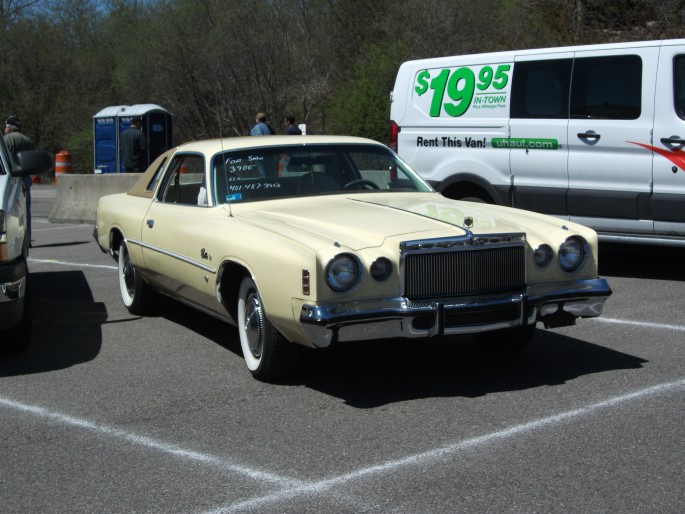 I could hear Ricardo Montalban’s ghost whispering in my ear to buy this Broughamy barge.

This homemade parts hauler was the best one I saw all day: This one appears to be part bike, part wheel barrow, and part hot rod. I wanted to take it home and do yard work with it and then take it for a spin around the neighborhood! 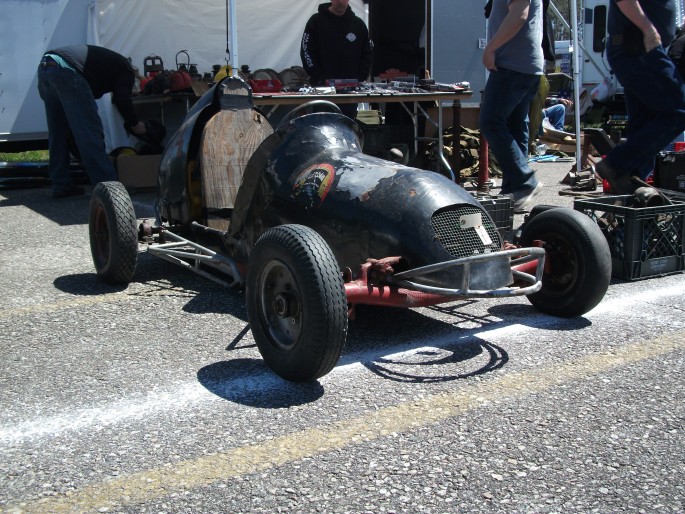 This old midget racer go-kart thing was just begging for someone to take it home and put a Hayabusa engine out back. 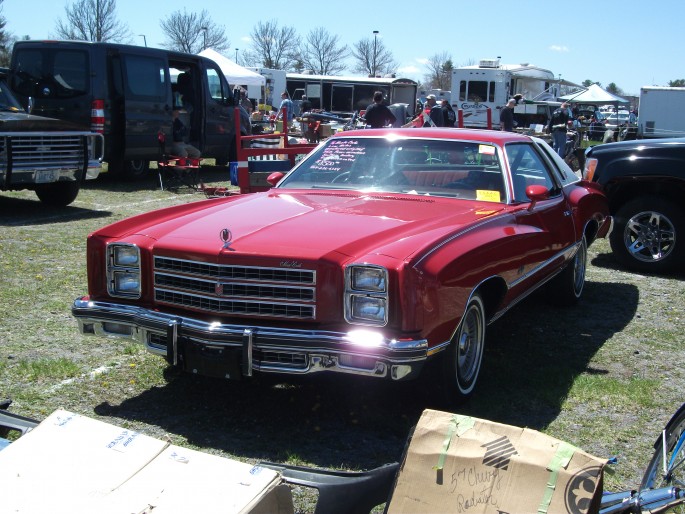 This one’s for Nutting, and it’s not even a Neo-Classical! This ’76 Monte was clean and cushy. 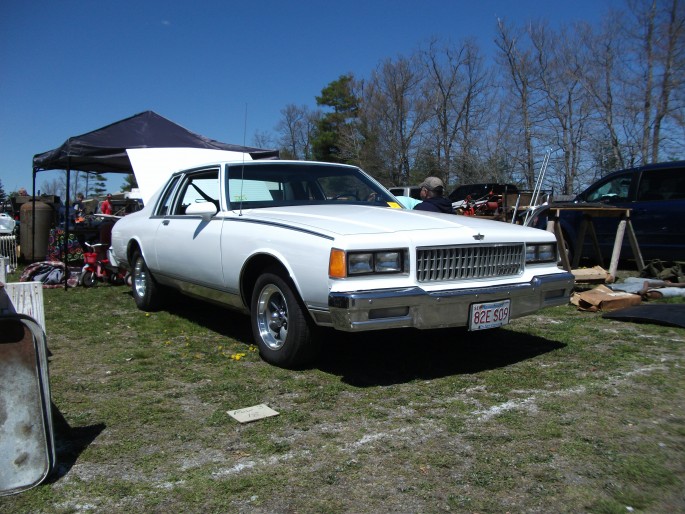 Buford’s two-door cousin? I love these Caprice coupes. This one was very clean, with a nice stance on Torq-Thrusts. 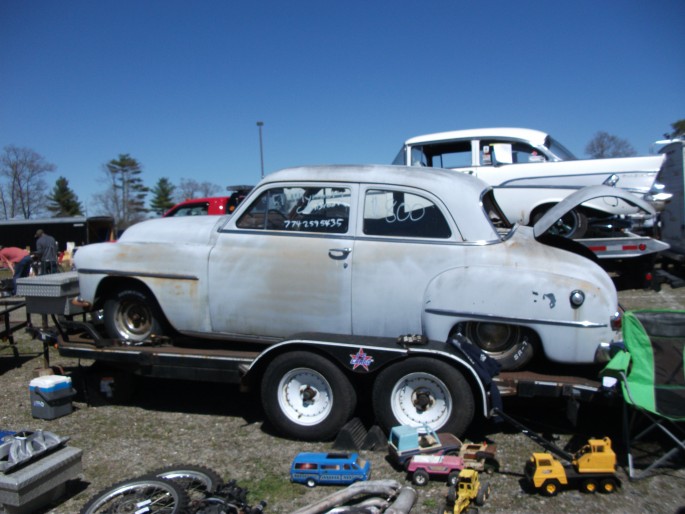 This early 50’s Plymouth Cranbrook looked like a solid project for under a grand. It was sitting on a S10 chassis, which is forgivable, and it took some will power on my part to walk away. 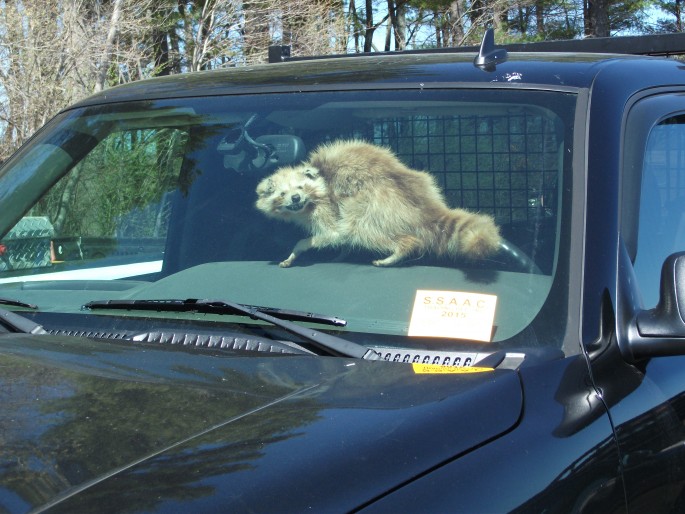 And I leave you with this: Best. Security system. EVER. You see this thing on the dash of a car or truck, and you know to just walk away and not ask questions.

Bouncers! More Photos Of The Great Iron At The Dirty Turtle Off Road Rock Bouncer Event Coolest Dyno Video Ever: Watch A Roush Yates Ford Racing Engine For A Prototype Make A Simulated Lap Of The Daytona Road Course

8 thoughts on “Swap Meet Madness: Check Out What We Found While Bargain Hunting!”