A BangShifter Abroad, Part 4: Loch Ness, Whisky, And The Dark History Of Edinburgh 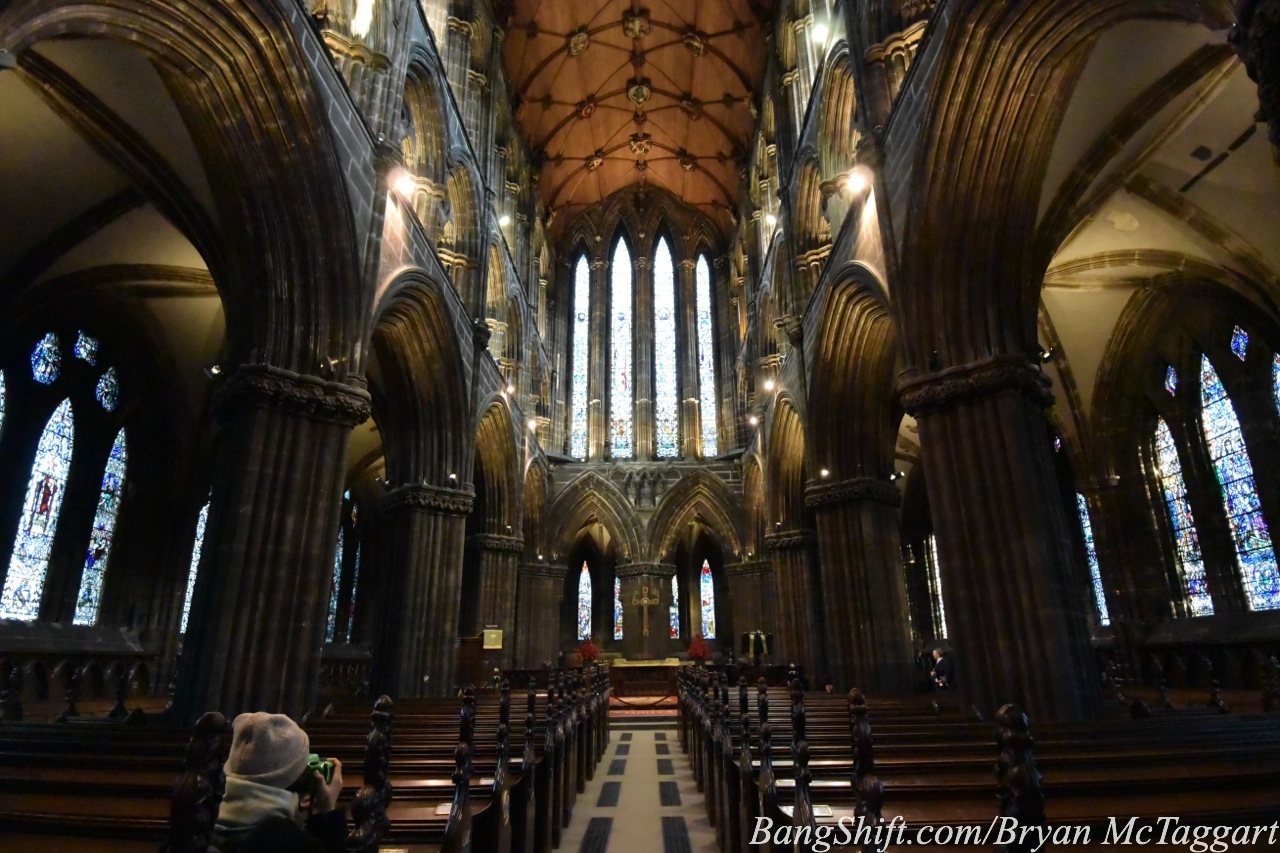 After our free day that we used to go to Bute, we started the actual tour of Scotland and Ireland. This necessitated a hotel change, so we called for a taxi and loaded our bags down to the sidewalk in front of Hotel Grasshoppers, where we were met by a man in a Vauxhall station wagon who seemed absolutely astonished at the amount of luggage we had. Even after telling him that we were going to be in the area for nearly a month he didn’t seem swayed. He said two things to us the entire trip to the Thistle Hotel: “Where are ye goin’?” and once we started unloading the bags, to me: “Aye, ye have a shitload of baggage to tend with, don’cha?”

At Hotel Thistle we met up with the rest of our tour group, about thirty-five people, most from North America, though we have a couple from Australia and one woman from India as well. We get Pat as a driver, a cheerful Irishman who is constantly concerned for everyone’s safety (likely because the company will kick him to the curb if so much as one passenger gets a scratch, from the feeling I get from him), and Brian, a Scot who is a walking Wikipedia page of information for anything you want to know about England’s angry plaid-wearing neighbors. Just after one in the afternoon we take off for a tour around Glasgow, checking out some of the sights…except for me, of course, since my head is on a swivel taking in all of the foreign automotive stuff we don’t see in the states. For the most part it’s five door hatches and vans…nothing really noteworthy, though I am starting to take a liking to the Renault Lagunas and did manage to see the late-model Volkswagen Scirocco. Once the tour was over we ate dinner and headed off to bed. 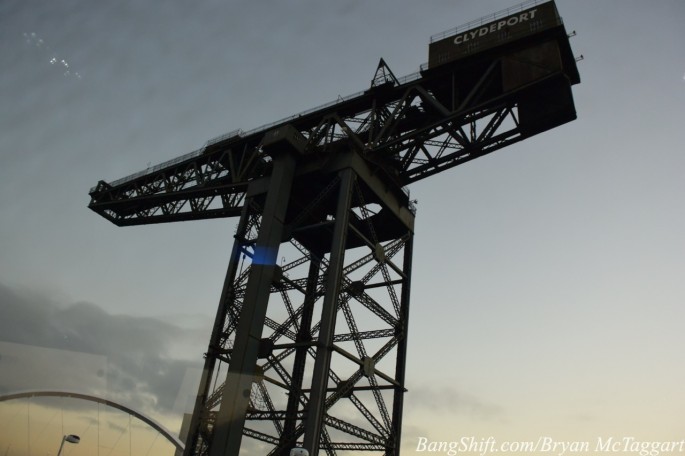 The next day we departed on a multi-stop tour that ended in the hunting hamlet of Nairn. This leg of the journey took us out of the Lowlands and into the Highlands, and rewarded us with spectacular views along the drive. It’s difficult to describe, and of course the photos don’t put what you are seeing into the proper perspective, but hopefully this is a good example of what you would see. 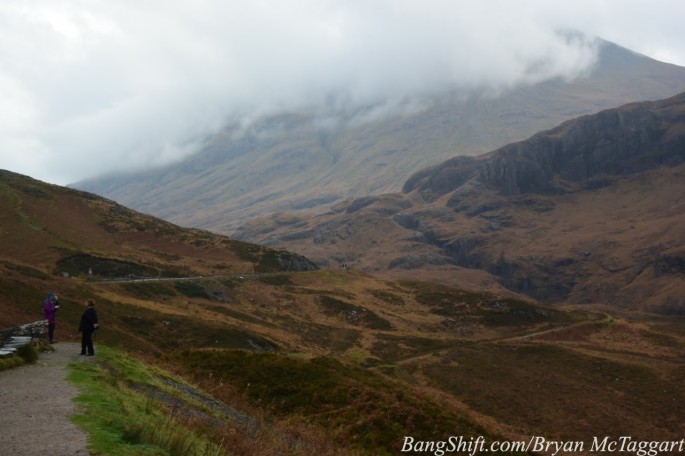 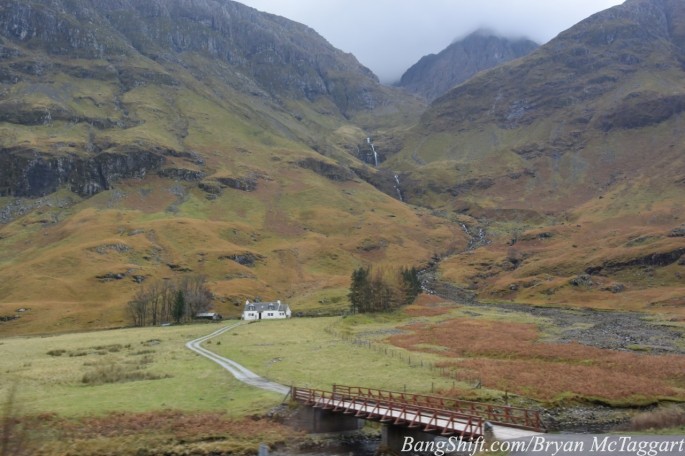 Regardless of how cold it would be, this is open-car territory, where you would want something with a great suspension and a decent amount of power to enjoy the winding, hilly roads. A Plaxton/Volvo coach is not the vehicle you want to be riding in on these roads…we weren’t carsick, we were honest-to-God seasick from the side-to-side pitching of the bus. That would be bad enough, but by the time we reached Inverness, we were ready to board a boat. It had to be better. Forget any “Nessie” jokes…Loch Ness isn’t a joke at all. It’s 24 miles of some of the darkest, coldest and intimidating water you’ve ever seen. Due to the peat content of the lands around the loch, the water has a tea-like color in the light (though it is exceedingly clean and safe to drink) but as it is, that water is pitch-black. We boarded the boat and took off on a half-loch cruise filled with Nessie puns and bad marketing through the PA system. The guy who was running the coffee shop/bar was a riot though…he made a comment about needing the permits to bag a deer to feed to his wolves. One lady laughed and started calling him a storyteller when he whipped out his phone, drug up a picture and said, “Nae, miss, I’m nae kidding…these are both Siberian Wolves.” He was not kidding.

At Nairn that night we were fed extremely well (including my first taste of haggis, which, while palatable enough isn’t going to be my instantly favorite food), and were entertained with music and dancing, courtesy of a Highland bagpiper, a skilled accordionist, and two Highland dancers. We fell asleep in the giant Finlay suite that they had given us, that was part of the “old” building…which brings up one interesting point: Pretty much everything in Scotland has an “old” or “new” connotation, and “new” tends to start somewhere around 1700. So, yeah…we slept in a freakin’ castle that night.

Next day, back on the bus and off to Bell’s whisky distillery…unfortunately for us, one that was in the middle of being repaired, so it appeared that the front desk was not expecting a bus load of tourists to magically appear. Still, the tour guide, Claire, was exceedingly knowledgable and especially tolerant of the more obnoxious tourists, and in the end we were rewarded for our troubles with a tasting of the factory reserve. It’s a shame that we don’t get it in the States, because I’m hard-pressed to think of any other whisky I’ve had that tasted that good.

More stops, more interesting food, and more roadways. The roads in Scotland are pretty much as you’d find in America, but in a narrower gauge. Highway driving on the A-roads is like cruising some of the state roads in the Midwest, motorways like the M8 are just like any city highway you can picture, and country roads follow the topography to a “T”…except when you get to points where the road is so narrow that the bus and a Mitsubishi truck can’t pass each other without one having to drive onto the shoulder or lawn. 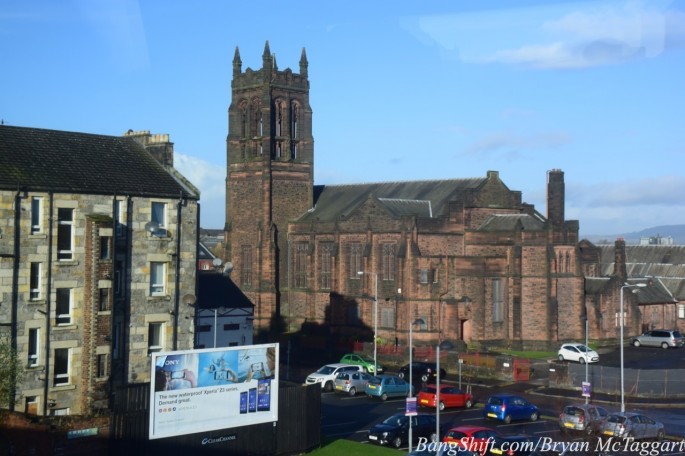 We are now in Edinburgh, and it’s been mostly walking and sightseeing here. We did a walk-around of “Edinburgh’s Haunted History”, but really the most frightening thing about that was that I ended up standing on the raised section of the center of town where people used to be hanged, being whipped by a strange blond woman wearing black leather while the crowd of tourists and locals watched on. Don’t ask questions, it’s better not to. We took a foot tour of some of the “old” and “new” areas of Edinburgh, including the areas of  Mary King’s Cross (where an entire block of city was quarantined due to the plague), and Deacon Brodie’s Pub (Deacon Brodie is the real-life inspiration behind Robert Lewis Stevenson’s The Strange Case of Dr. Jeykll and Mr. Hyde.

Tomorrow morning we leave Scotland and take the ferry across the North Sea to Ireland. I’m not sure if we’re going to see the Harland and Wolff Shipyards or the dock that the doomed liner left, but expect a bit of Titanic information in the next installment… A Spacecraft Called Rosetta Will Be Landing On A Comet Today And You'll Be Able To See Photos And Video - Incredible Stuff! Watch This Kid Run Out Of Talent, Mangle A BMW, And Catch An Airbag To The Face In The Desert

2 thoughts on “A BangShifter Abroad, Part 4: Loch Ness, Whisky, And The Dark History Of Edinburgh”