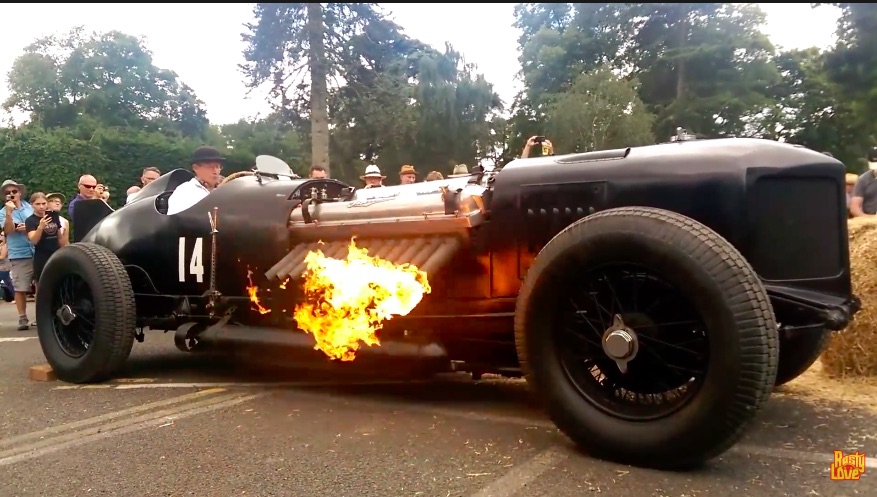 This is pretty awesome, if not totally off the wall. You are about to see the incredibly and fancifully massive PT Boat engine powered Packard Bentley fire up. This is one of those cars that a guy with a ton of money dreamed up and made happen. As you’d imagine the PT boat engine market is rather small and getting one, getting the parts, and getting it to work is not something the average plumber can afford.

The car is based off of a super highly modified 1930 Bentley 8-Litre chassis and beyond that it is s custom build. There are several of these incredible cars in England that have been built “post period” but seem to fit right in with the Beast of Turin and others that actually did exist in the realm of reality about 100 years ago.

The engine is 40-liters (assuming it is stock bore and stroke), carries a centrifugal supercharger, and makes anywhere between 950 and 1,500hp depending on which exact variation of the Packard 1A-2500 it is. Oh, the 2500 in it’s designation? That stands for the cubic inch displacement which is technically something like 2,489ci but here’s to rounding up.

The car is clearly running a little rich in this video as there are flames lingering in the exhaust but hot damn is it a wild thing to see. Yes it moves, yes it drives, and yes it gets driven “competitively” at hill climbs and even some vintage racing events!

Press play below to see the massive Packard-Bentley fire up and, well fire up!

Large and Lovely: The 2022 Genesis G90 Sedan Looks Like A Million Bucks And A Segment Buster For Sale: This Pro Street Vegas Is A Pretty Cool Ride That Is Faster Than The Pro Street Name Might Imply