Aug 05, 2016Craig FitzgeraldBangShift NewsComments Off on Hemmings Editor Mike McNessor’s New Book About Tackling the Carrera Panamericana in a ’61 Chevy Impala is a Wild Ride 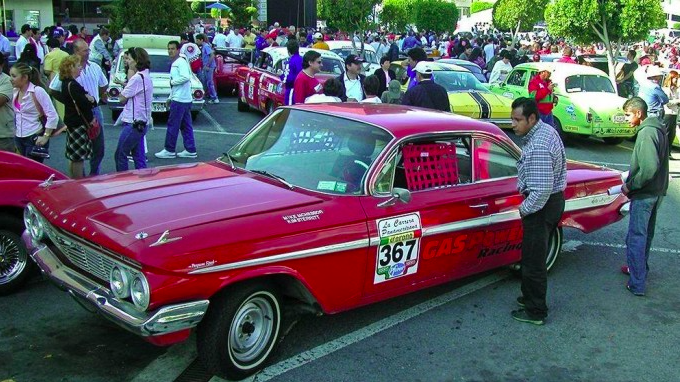 Mike McNessor is the editor of Hemmings Motor News, and his daily job involves pulling content together that hundreds of thousands of people read in the bathroom every month. In 2005, though, Mike left the comfortable confines of his home near Albany, New York, and with three friends, dragged a ’61 Impala bubbletop to Mexico to compete in the revived Carrera Panamericana. His new book — ¡Carrera!: How the world’s greatest race got into my head and kicked my butt — was just published on Amazon both in print and in a Kindle edition, and it’s a wild ride, detailing Mike’s obsession with cars, fixing things, and how he conned three pals out of their cash, talent and equipment to help a “classic underachiever” — his words — realize his dream.

In the first half-dozen chapters, Mike writes extensively about how he got involved with cars in the first place. From his first run on a go-kart his dad bought him, to failed experiments with minibikes, to an ill-fated run from the police in Albany, Mike had gasoline in his veins, with only a handful of outlets for his enthusiasm. 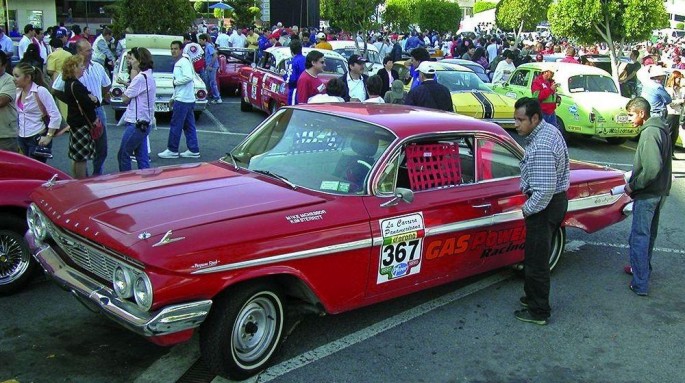 Among purpose built race cars and restored classics competing in the Carrera Panamericana, Mike’s 1961 Impala with too much spring in the front end still draws a crowd.

“If we had a family coat of arms,” Mike writes, “on it would be a rusty ’69 Chevelle propped up on cement blocks with ‘MAKE OFFER’ scrawled across the windshield in white shoe polish.”

He spent time at Lebanon Valley Dragway as a kid, and eventually wrote and announced for them for a time, but his racing experience was the kind a kid could do between the cornfields west of Albany.

One evening in the 2004, while he and his buddy Kim were downing beers in the garage, they came across a magazine article detailing another writer’s experience in the Carrera Panamericana, the resurrected vintage car race that spans the width of Mexico, from Oaxaca on the Pacific coast, to Zacatecas and Durango in the north central region of the country. 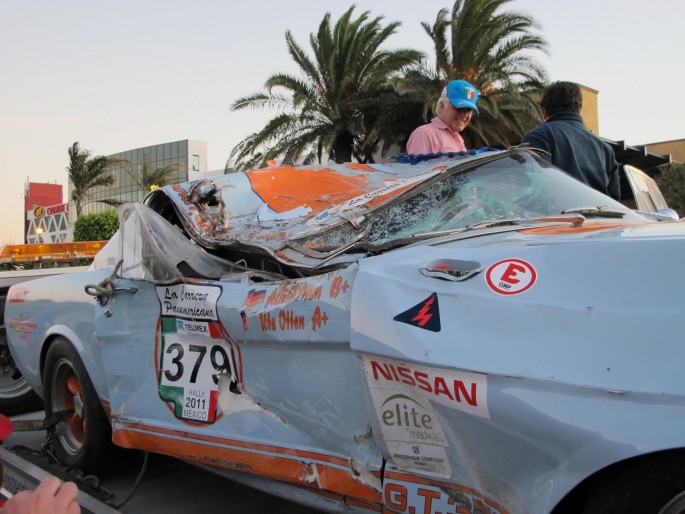 It might be for old cars, but the modern iteration of the Carrera Panamericana isn’t for trailer queens.

The original Carrera Panamericana only ran from 1950 to 1954, a bid to promote the new Pan-American Highway, which had been completed that first year. “Tough?” Mike asks in the pages of his book. “Of the 132 cars that started the race only 58 finished…The first of the original Carrera’s many fatalities
occurred just 17 miles from the starting line on Cinco de Mayo 1950. From there the bodies piled up, drivers and spectators alike, until the plug was pulled after the 1954 race.”

The race in the magazine Mike read was the resurrected Carrera, launched in 1988 and run annually since. It’s a vintage car time-speed-distance rally, restricting participants to cars built before 1965.

In a beer-fueled haze, the two decided that it was just the kind of adventure two mid-30-year-olds — one a homeowner and editor at the Albany Times-Union, the other a Merchant Seaman — were up for. First off, it was fairly cheap to enter — about $4,000 when Mike competed — and required no special experience or licensing to compete. All it took was a car, some safety equipment and a truck to haul it there. And that’s where Mike’s book really comes into its own. 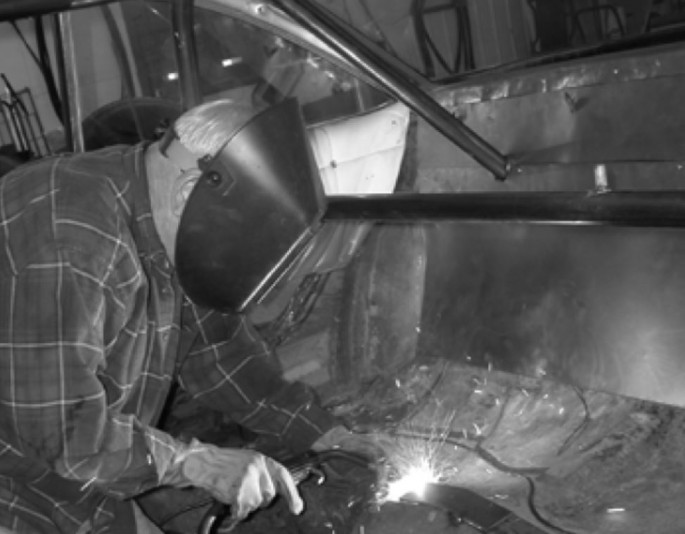 Mike corralled all the support he could, including help from his dad, who welded the roll cage in the Impala.

The reason Roadkill and BangShift speak to so many hardcore wrench-turners is because of their DIY ethic. Same with ¡Carrera!. These guys were funded by their own bank accounts and credit cards. They bought their own beat-to-hell Chevy one-ton with a 6.5-liter diesel, they borrowed a trailer, they brought their own tools, and they fixed what needed to be fixed, not just in the race, but on the trip to the Mexican border.

Since Mike self-deprecatingly suggests he has no skills, his job was to scope out out a car they could turn into something resembling a vintage race car. His adventures to western New York to see a 1950s Lincoln and South Carolina just to see a 1955 Chevy that had begun its slow progress back to the earth are terrific. 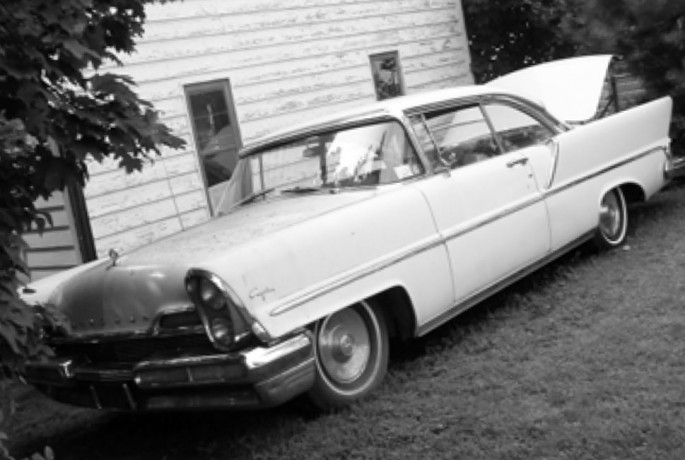 The 1957 Lincoln Capri the team looked at in western New York would’ve been a cool race car, but it had a lot more limited parts network than a small-block Chevy.

The fact that the 1961 Impala they ended up settling on was just 10 minutes up the road in the Want Ad Digest was even better.

Mike covers all of the modifications, updates, maintenance and fabrication they had to do to get the Impala ready in just a few months. From roll cages to brakes and suspension to a new 348 secured off of eBay, Mike, Kim, Scott and Ken — both mechanics and friends since childhood — tore the Impala apart in a frenzy. 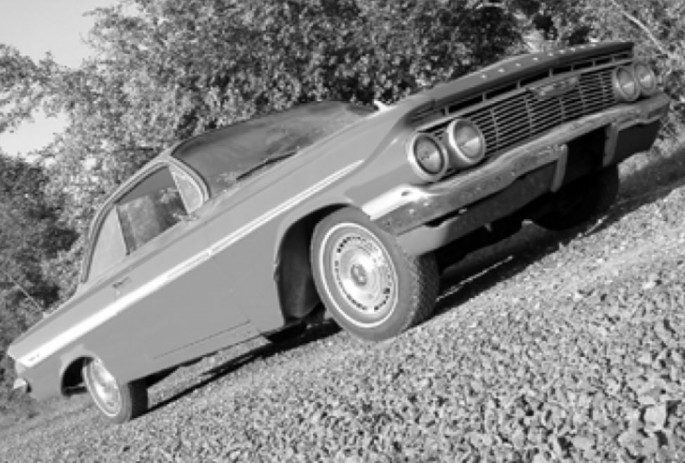 Early on, the Impala bubbletop didn’t look like much of a race car, but a roll cage, wheel and an open exhaust would go a long way to curing that.

Along the way, they decided to convert the Impala to run on propane. Unlike here, propane for automotive use is pretty accessible, and it didn’t hurt that their mentor for the race — Jose Rubio — was running the same fuel and was hauling his own fueling station for the race.

The racing action is great, but the trip to the Mexican border is just as fun, and familiar to anyone who’s ever had to haul a trailer on a schedule. Before they were barely out of range of Albany’s weakest FM radio station, they’d repaired the truck’s failing hydraulic clutch line five times. Just getting their sorry looking rig to Pennsylvania was an adventure. 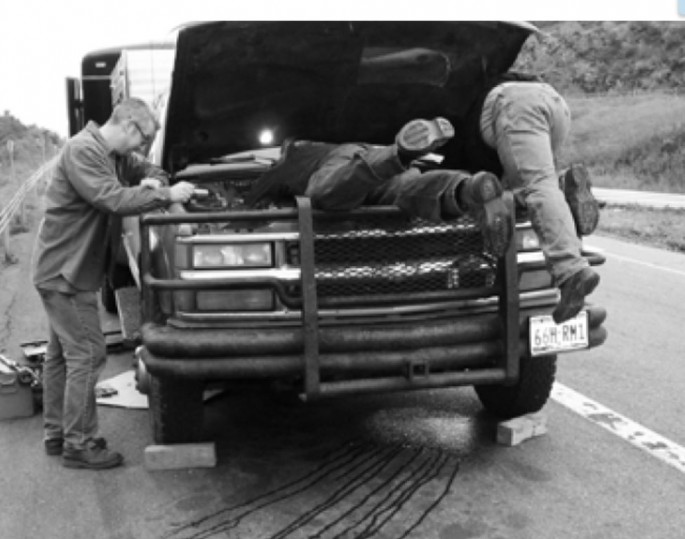 Mike writing style is fast and engaging, and while the book has plenty of wrench-turning content, it’s also hilarious. “The steering was loose,” Mike writes of his first five minutes behind the wheel of an Impala driven in anger in Mexico. “Scary loose. Like ‘some important parts under there in the dark weren’t hooked to anything anymore’ kind of loose…My cornering technique on these roads had less
to do with finding apexes than finding a way to keep a 4,000-pound sedan and its two passengers from
plunging to their deaths.”

Yes, it’s a book about cars and wrenching and racing, but it’s also a terrific story about friendship and family and not giving up when things look their worst. It’s a hell of a fun read, and it was written for people just like us.

The book is available as a Kindle download for $5.49, or in a paperback print edition for $12, both from Amazon.