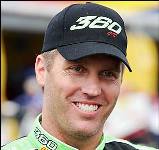 Driver Jeremy Mayfield was apparently subjected to the least random random drug test of all time by NASCAR last Monday, according to the Associated Press. The results have not been made public as of yet, but the one-week delay seems to indicate a thorough test is underway.

So why did NASCAR test him again? After a judge ruled that he was eligible to compete, Mayfield was then back under the NASCAR drug testing policy as an active driver. We’re sure it was just some wacky coincidence and that the drug testing computer just spat his name out to be tested.

This whole thing is starting to smell worse and worse for NASCAR, which appears desperate to catch Mayfield doing something, anything, that would disqualify him from owning or driving again forever.

In the end the sanctioning body will probably win by attrition as there have been whispers that Mayfield plans on selling his race team due to a lack of funding.

Here’s the AP story that tells the tale.