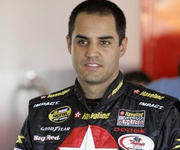 Juan Pablo Montoya, Formula One driver turned NASCAR left-turner, told the media that he had been offered Formula One rides and turned them all down.

He was immediately whisked away to be drug tested after making these statements. He was quoted by the Spanish news agency EFE as saying, “I am very happy in the U.S., and so is my family. Truthfully, it has never gone through my head to go back to Formula 1. What’s more, even if McLaren or Ferrari wanted me, I would not go.”

Why would he leave the wave of success he’s been having in NASCAR? I mean he’s won, ummm, a race. Montoya has 7 career Formula One wins. He left the series mid-season in 2006 due to team issues.

The chance to triple your paycheck, race in Monaco instead of Talladega, and race in a series that has enough sponsor money to support itself through virtually anything didn’t appeal to him. He must be hypnotized by all the left hand turns.

In what script would it have ever been written that NASCAR guys would be turning down Formula One rides? Smokey Yunick wouldn’t approve.