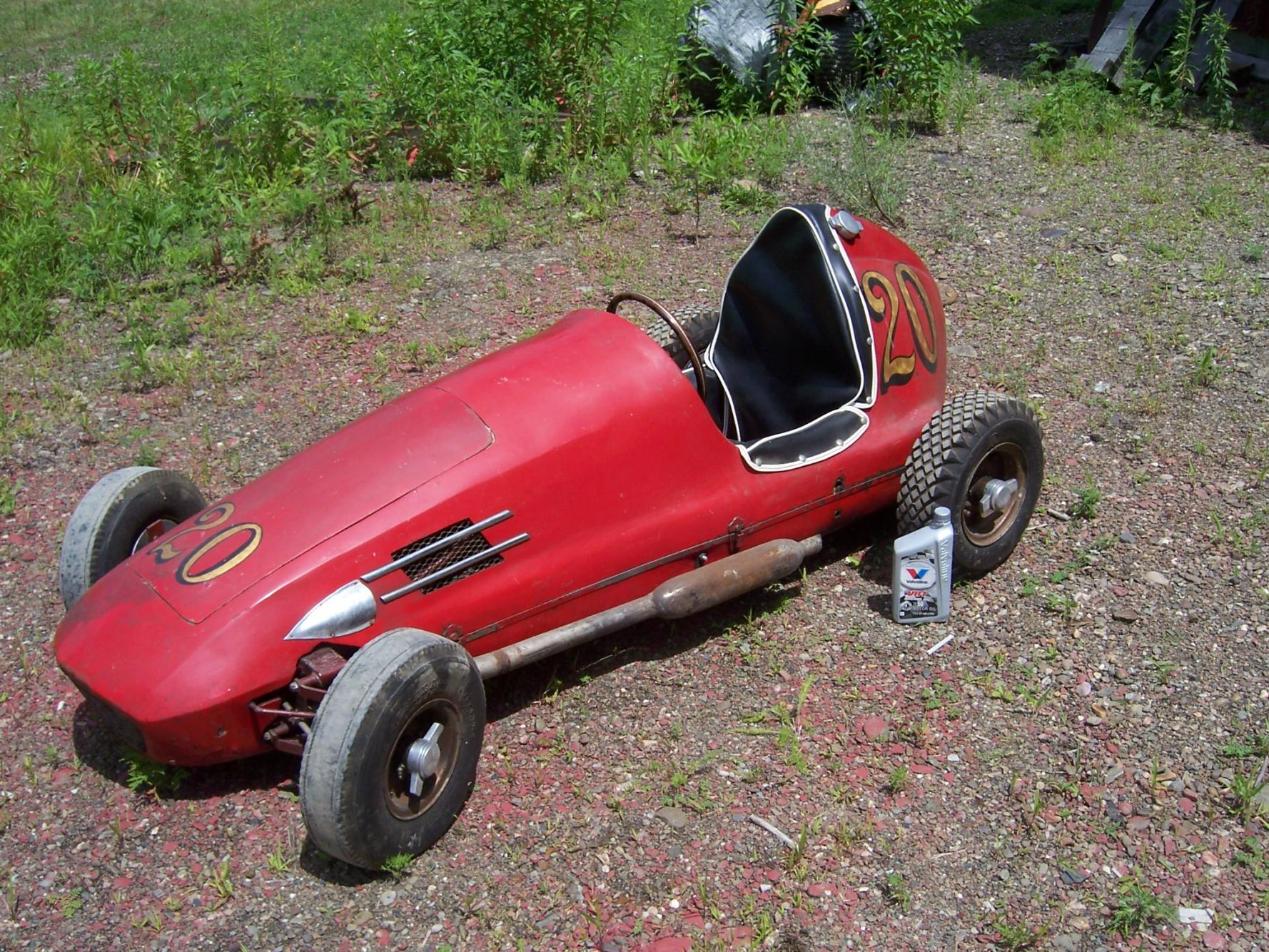 We’ve featured quarter midgets from time to time, but nobody’s ever seen one like this. In the 1950s, a guy with a whole lot of talent and a kid who was crazy for racing built this amazing car, using nothing but his skills, his tools and the things he had close by thanks to his hobby as a gunsmith and his profession as an electrician. It’s one of the coolest things we’ve seen in quite a while. 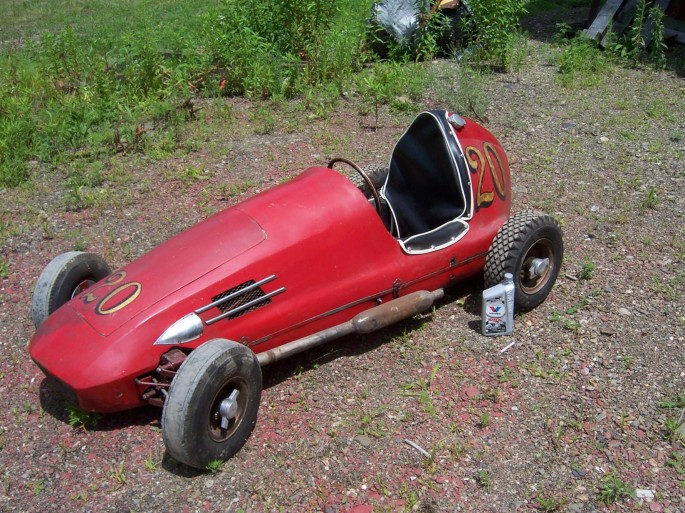 John Calogero owns it now. He’s a hot-rodder who lives in Duchess County, New York, and he’s got some great stories about its construction. It was built by Harlan Howe. When John Calogero was growing up, he was friends with Harlan’ son, John.

In no uncertain terms, Harlan Howe was a craftsman. If you google Harlan Howe’s name today, you’ll find that some of the rifles he built – known as Kentucky rifles – are prized collectibles today, trading hands through auction houses like Christie’s.

Yet, in the 1950s, Harlan still had a day job. He worked as an electrician and followed his gunsmithing passion in his spare time.

He also had children, one of which – Johnny Howe – was interested in racing. Quarter Midget racing was huge at the time. The Nassau Quarter Midget Association ran races in local lots every Sunday, occasionally at the S. Klein on the Square parking lot in West Hempstead, and other times at the Minneola Courthouse parking lot. The tracks even included an indoor venue, which doubled as ice rinks in the winter. Nearby Freeport Raceway on Long Island often promoted intermission events with parade laps featuring the Quarter Midgets. Most racers were building cars out of kits, but with a dad like Harlan Howe around, a kit just wouldn’t do. 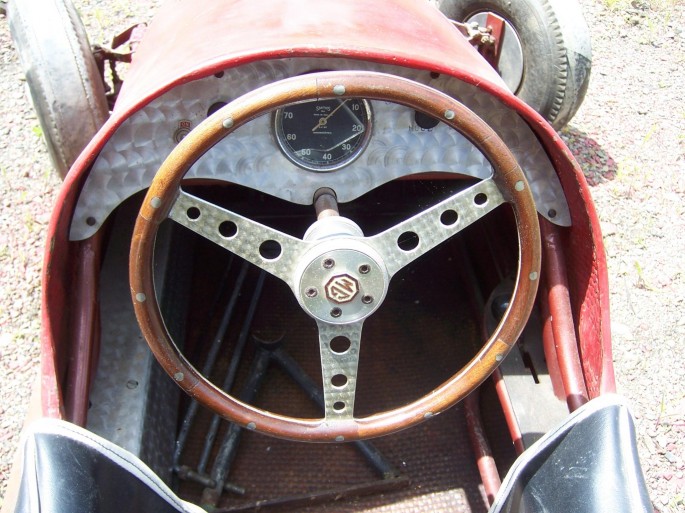 The first car he built featured a two-stroke Sprite engine from a paratrooper’s fold-up motorbike mounted at the rear, where most competitors were using a four-stroke Continental engine. “It could scream,” says John Calogero. “Harlan played with the ports and pipes and jetting to tweak every bit of its potential. It was sleek, fiberglass- bodied, tube framed and cool beyond a ten-year old’s wildest dreams.”

Almost as soon he got it to where he wanted, Harlan started building another car, the Number 20 car you see here. “He knew what to improve and he had the extraordinary skills to do it,” says John.

Harlan had lathes and drills, but his equipment was far from new, and far from state of the art. But he had the skills and the passion required to build a truly special car for his son. “That was the creative part that was so spectacular,” says John. 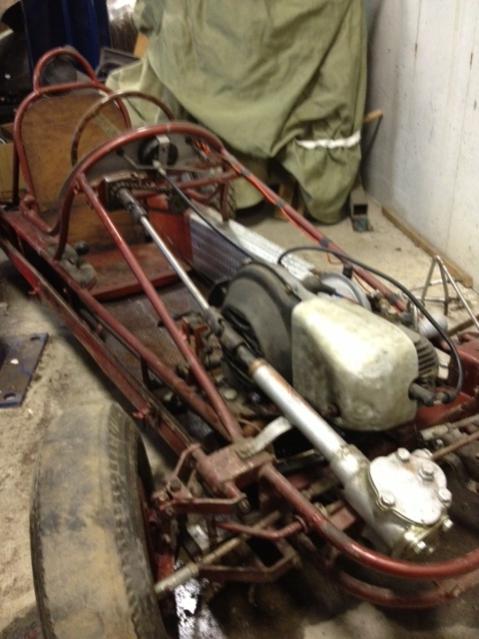 His profession as an electrician made Harlan an expert with metal conduit. He hand-fabricated and gas-welded the chassis out of that material. “I watched as the tubing arrived and was skillfully bent and brazed and welded into a frame,” says John. “Suspension points were added, plates for bearings and shafts, backing plates fabbed for hydraulic brakes, pedals formed and firewalls shaped.”

Amongst his other hobbies, Harlan Howe was a sports car enthusiast. “He had an MG TC that he bought as a basket case that ended up with a Judson supercharger,” says John. “It was just a little jewel.” At the same time, he was enjoying a wide range of uncommon European sports cars, each to learn their special qualities and abilities before moving on to the next adventure. He had Aston Martins, a Lagonda sedan that supposedly belonged to the Royal Family, a Ferrari and a range of high-end 1950s-era sports cars. He enjoyed cars for their design, and even their quirks, ….

Along the way, he picked up an appreciation for how those cars drove and handled. Most quarter midgets at this time were pretty crude, with solid axles and no suspension to speak of. But the Number 20 Harlan built for his son Johnny would be different. It featured an independent suspension up front, with a transverse leaf spring. 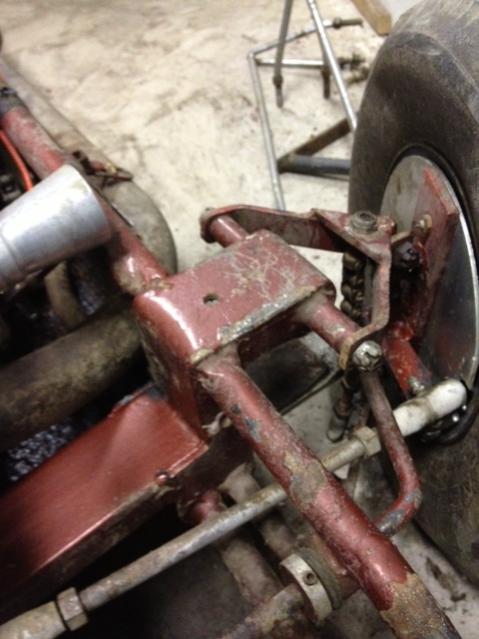 The delicate little a-arms you see in the picture? John notes that Harlan had a ready source of hardened steel right in his workshop. “They’re made of gun barrels,” he says. John Howe thinks they may have been .30-caliber, based on the kind of rifles his father was building at the time.

The body – reminiscent of a 1950s Grand Prix racer – is hand-formed fiberglass, from that era when Popular Mechanics was featuring plans to make everything from kayaks to fallout shelters out of the stuff. He hand-built a form using chicken wire, newspaper and Plaster of Paris, then made a female mold, into which he hand-laid the fiberglass for the body. “Sanding, shaping—gradually we began to see what he had in mind and we were without words.” John remembers. 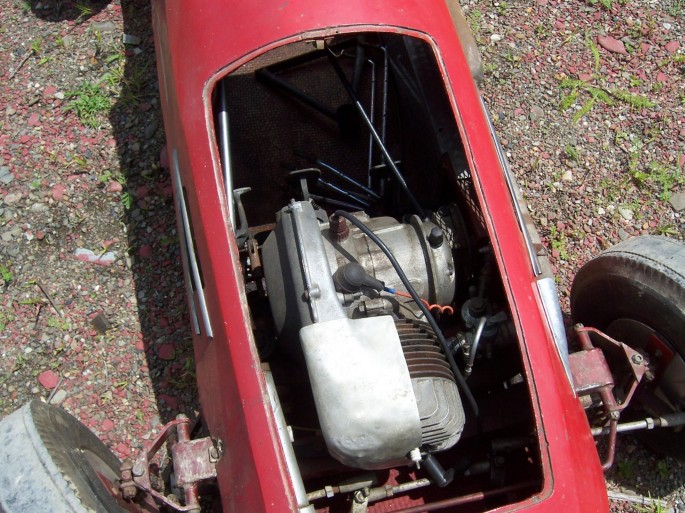 The engine is a unique bit of hardware, too. Instead of the Sprite engine, this time Harlan selected something even better: a Vespa scooter engine. At 125cc, Vespa scooters also had the benefit of a three-speed manual gearbox. The Vespa engine and transmission are one unit, so Harlan modified the rear wheel hub to instead feature a sprocket, which was connected to the rear wheels by an chain enclosed in a sheet-metal guard.

It was designed to be a race car that could cope with the differences in the tracks Johnny was likely to see. “The drive wheel can be switched by swapping key and hub from side to side,” says John, “and the chain driven by the steering shaft allows you to change ratios for different tracks.” The juice rear brakes come courtesy of a Buick master cylinder. 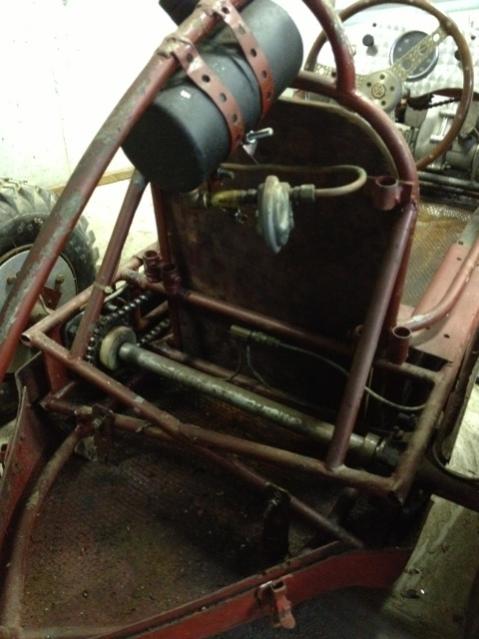 “I was able to squeeze into it once when I was about 11 or so,” says John. “I was graciously allowed to take a few laps around the Sunday parking lot track and to say I was thrilled was an understatement.”

About 20 years after John took that ride, he got a call from Johnny Howe. “John decided to move his Porsche repair business to California.” He said he had shipped all of his tools and machines out there already, but he had one last piece of business to sort out: Number 20.

He tried to give it to a number of different collections and museums, but nobody was interested. John Calogero said “I know someone who’s interested. Me. I was on my way to pick it up in a matter of minutes.”

Scooterworks in Chicago – which today is the biggest supplier of vintage Vespa restoration parts – rebuilt the engine. “They called when it arrived to say they had never seen a piston so beautifully modified with special reliefs added for heat expansion. I could almost hear Harlan laughing in the background,” John says.

John’s kids ran it around parking lots. “The kids grew quickly,-but now there is a crop of grandkids who will soon be introduced to Number 20,” says John. 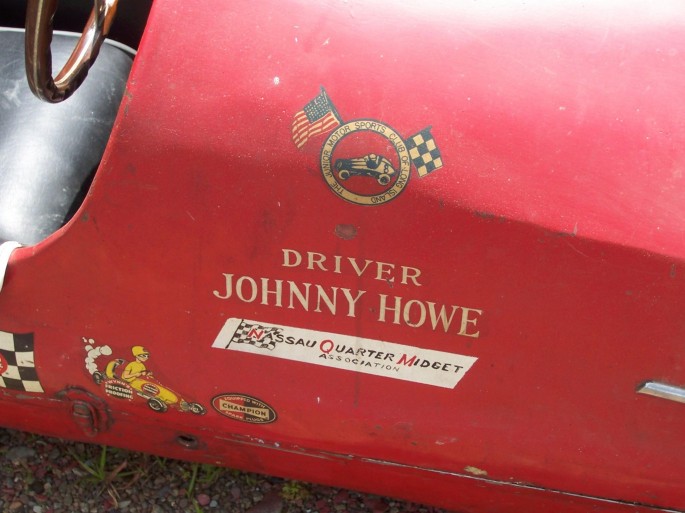 “My instinct in the 1980s was to restore it with fresh paint, but I resisted, mostly because at that time, it would’ve been impossible to replicate the decals,” he says. “It still looks exactly as it did the last time John roared around the track passing the other racers with the two-stroke screaming as he went. Each time I look at it and think of the fun it will bring the next round of little drivers, it reminds me of a simpler time, a great time, and of good friends, one with a fantastic father who understood kids and all things mechanical. It wears its scars and bruises proudly.”