Nut Driver: My Monte Is Now A FORD (Found On Road Dead) Thanks To A Broken Transmission 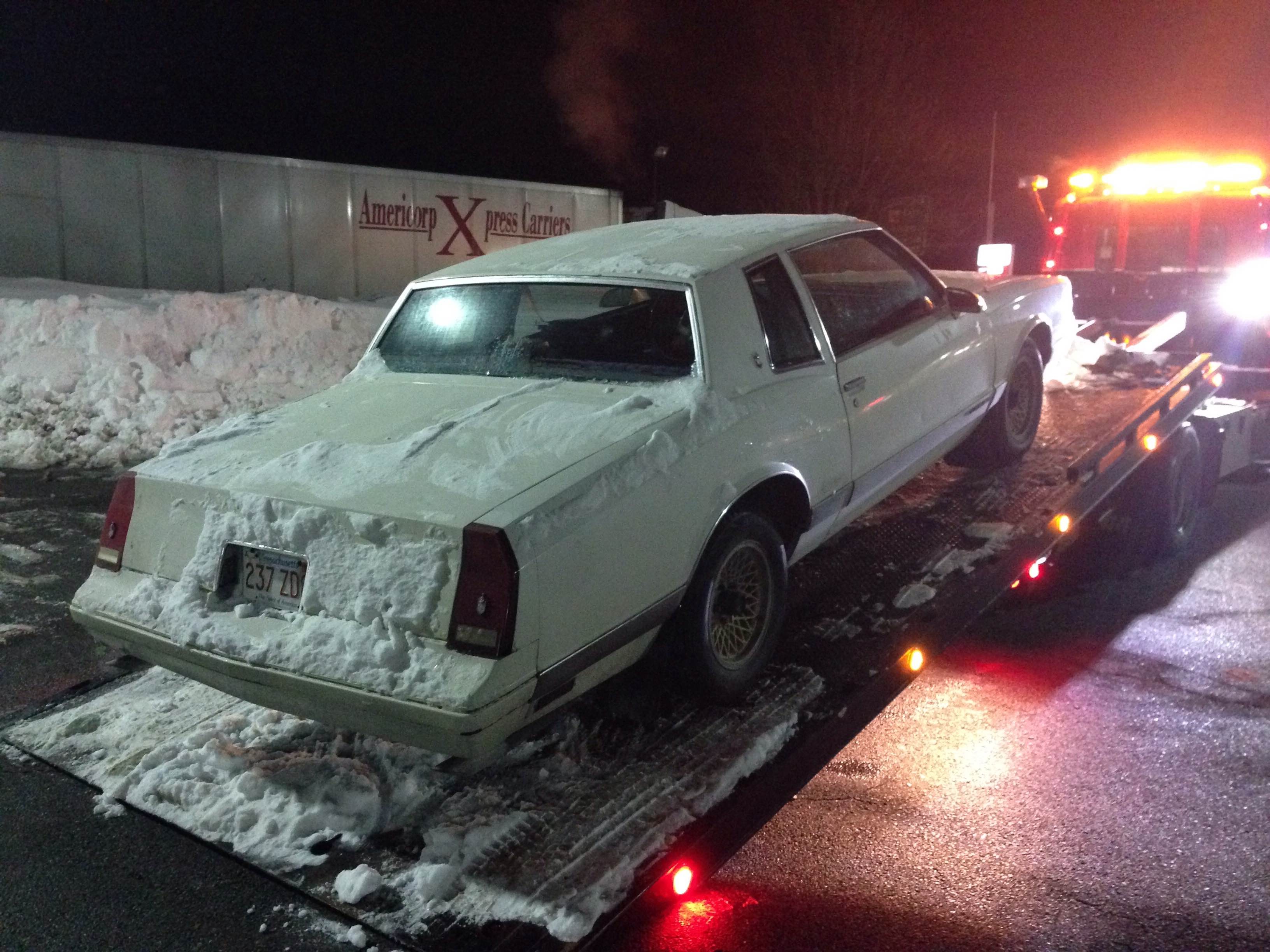 [“Nut Driver” features updates on Dave Nutting’s daily driver 1987 Chevrolet Monte Carlo]
Before continuing on, if you want to catch up on the other installments click HERE.

It’s 1:59 AM Eastern as I write this update while my car currently sits in a driveway, inoperable.

Now that we have the ending out of the way, let’s jump back a bit in time, say nine hours or so, to where this saga all began with a seemingly ordinary attempt to merge onto the highway.

Admittedly it wasn’t a very aggressive attempt, as anything past 3/4 throttle in a G-body equipped with a wheezing 144,000 mile 150 horsepower 5.0L and 2.41 peg leg is really just creating noise. The small thump once I hit 55 didn’t give me much pause, but you better believe the sudden lack of forward acceleration did. “Hey, maybe the transmission shifted into neutral”, I thought, giving it an optimistic rev and shift into third.

Nope, turns out that my aged 2004R had turned into a two-speed: Neutral and Park.

Spotting a full service rest stop half a mile ahead, I prayed to the Gods of all things RWD and full-framed, threw on my hazards, and revved up the motor to keep forward momentum up. Vin Diesel may have lived a quarter mile at a time, but I lived for that half mile.

Sure, I could have left the car stranded on the highway, but I’ve always joked with my friends that anyone that causes a traffic jam during rush hour should have their license revoked, and besides I hadn’t washed the car in a while so it wasn’t prepared for the spotlight of the Evening News traffic report.

So here I found myself, stranded at a highway rest stop, across from a small pickup of questionable appearance with Maine plates and an even more questionable occupant that was staring down the guy in the old Chevy (Me) that was busy crawling around under the car trying to figure out the answer to “What the heck happened?”.

I had a few options for what to do next: Call my wife, who had the AAA card? Call my buddy that may have access to a tow truck? Both good decisions, but instead I called Lohnes.

The below may not be 100% accurate dialog, but it’s the closest I can recall.

Nutting: “Hey man, it’s Dave”
Brian: “Who is this, and how did you get my number?”
Nutting: “Uh, Dave. Nutting”
Brian: ::silence::
Nutting: “Hello? Anywho, the inevitable happened and this car finally left me stranded”
Brian: ::Laughter, followed by a dial tone::

Brian might have also included some solid advice about checking the shifter linkage and TV cable, but unfortunately both of those checked out fine.

At this point the Monte would only idle forward if I held the RPMs up and laughed at me if I attempted reverse. Yep, time for a tow.

Fast forwarding a bit, my wife and my buddy Dundy show up with her triple AAA card, which I used to call for a tow truck. Being told that it would be “up to a three hour wait”, we settled down for a few Big Macs at the rest stop McDonalds while waiting for our broken Chevy to be carted home. Is there anything more American than that?

Well, three hours turned five thanks to a call informing us that the tow scheduled to be there by 9:30 would now be there “by 11:30”. No word on if that was AM or PM as the lady hung up on me before I could ask the question.

11:45 PM rolled around, at which point a call back to AAA resulted in the revelation that “The truck scheduled to pick you up got stuck in the snow” and “The best advice I can give you is to leave the car for the night and come back in the morning”.

With my marriage in shambles at this point, only saved by a last ditch offering of a large bag of Sour Patch kids, Dundy talked me out of giving the car away to our new friend in the aforementioned pickup truck “Creepy Jack”, who faithfully stared us down for hours while chain smoking some hand-rolled “cigarettes”, and instead to call up a private tow company from a few towns over, Negoshian’s Towing.

This was the best decision of the day, as the guys there were able to get a flatbed to me within fifteen minutes and the driver, Jeff was a gearhead to boot! Jeff is a moderator over at NastyZ28.com, so I figured he had to be alright, even if he did have a fascination with F-bodies that rivaled my obsession with G-bodies. Turns out that Jeff was also relieved to find out that the Monte he came to tow wasn’t “Some clapped out G-body that the owner picked up in high school and never took care of” (Jeff was in luck as I left my SS in the garage that day).

30 minutes later, the Monte was dropped off and paid for, ready for next steps. The thing is, I have no idea what those next steps should be.

– Should I go the quick and dirty route and pull the 2004R out of the SS in a mad thrash to get this Monte back on the road?
– Should I just have the 2004R currently in the car rebuilt?
– Suck it up and admit that after almost a year and a half and 20,000 miles I need a “more reliable” daily driver for the winter?

Keep in mind that I have a 5.3L LS motor waiting to be swapped in and autocross season starting in April.

Looks like it’s going to be an interesting weekend’s worth of decisions.

[Quick Update: A rep from AAA contacted me to apologize for last night’s events. Considering the absolute mess of a condition that most of the roads in MA are in at the moment, it’s fair to give them a little leeway and I appreciate them caring enough to reach out to help correct what happened.]

29 thoughts on “Nut Driver: My Monte Is Now A FORD (Found On Road Dead) Thanks To A Broken Transmission”