Rough Start Fox Body: Tearing The Transmission Down To The Bone 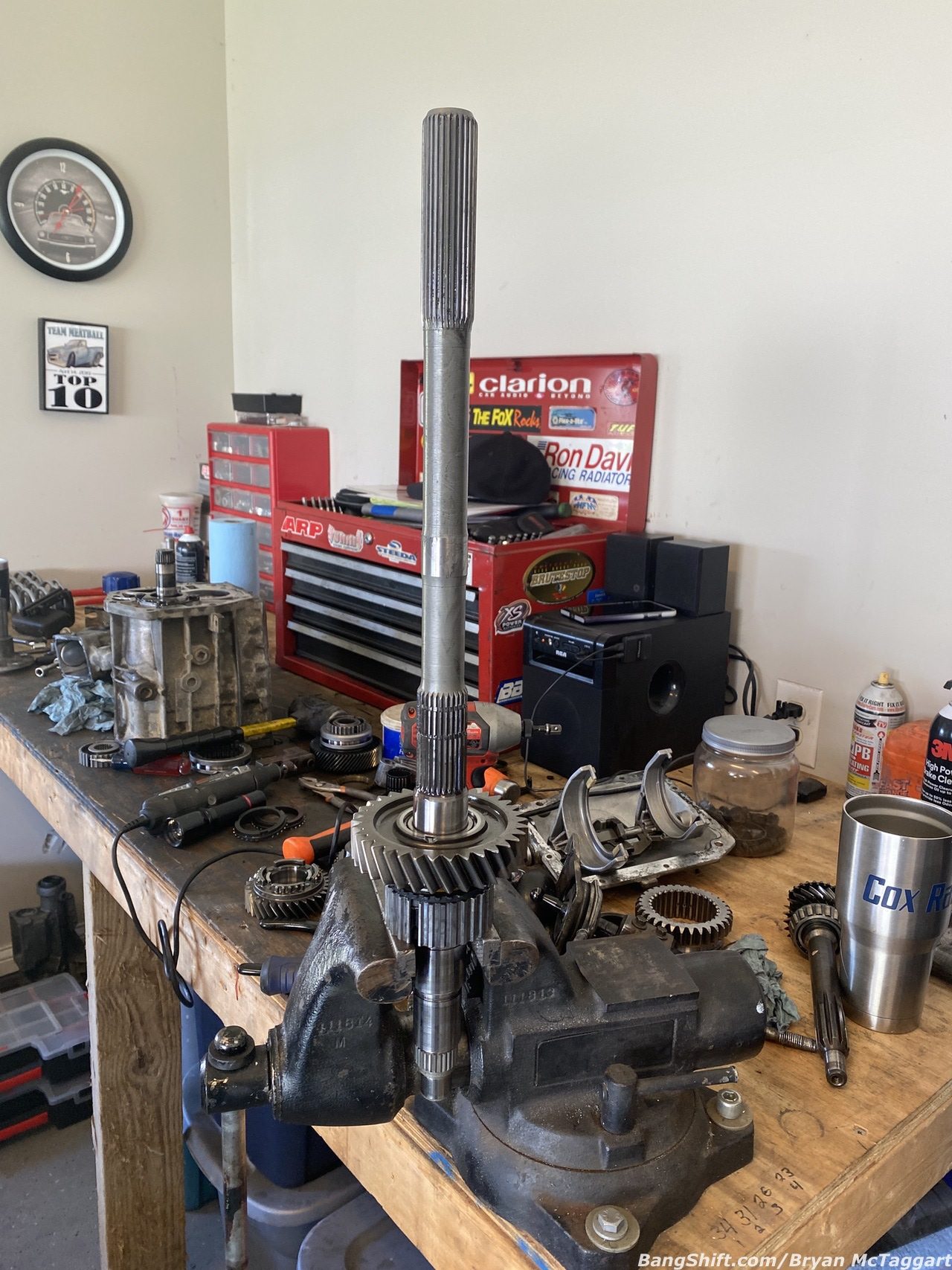 In the last update of our $600 1989 Ford Mustang LX project beater, we had dropped in the engine and the radiator assembly. It’s been a couple of weeks…you would think that you would’ve heard the sounds of small-block Ford by now, right? Well…no. There is more to it than that. Systems are being checked, the engine bay fuel system needs to be built up, and other details need to be addressed, but let’s start with the biggest one: There’s no transmission in the car. The only thing holding the engine in place are the motor mount bolts and a couple of ratchet straps that are keeping the tail of the block from dipping towards the dirt. I was 50/50 on the decision, but luck would have it, that decision was made: our little Fox Body will have a stick! 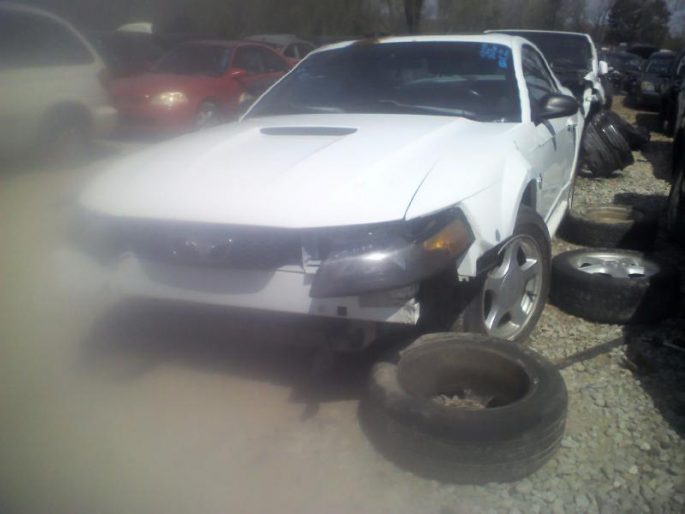 This 1999 Mustang donated it’s T5 five-speed manual transmission to the cause, along with the pedal box, for a total of $300, removed for me and ready to go. That’s great and all, really…but here’s where I run into a problem. I’ve owned three vehicles over the years that were manual transmission-equipped: my 1987 Dodge Diplomat, a 1984 Dodge D100, and the 2012 Chevy Cruze. Here’s all I learned over the years: Avoid the Cruze. I can take out and install a transmission, it’s fairly straightforward. But a junkyard-sourced five-speed? I might have gotten lucky stuffing it directly behind the 302 and could’ve called it a day, but when American Powertrain stepped up with parts to help unite engine and transmission together in mechanical matrimony, yeeting an unknown box into the car didn’t seem like the right thing to do.

So, not knowing what I was doing, I did the smart thing, and asked around for someone who did. After reaching out to Andy Warren, he pointed me towards NMRA racer Adam Cox. Adam’s a Mustang guy through and through and knows his way around the T5, and agreed to help me give the gearbox a once-over to make sure that it won’t turn to dust the moment I try to shift from first to second. If this seems like radical overkill…yeah, it is, especially for a budget build, but if you’re going to do something, do it right…right? This work does two things: it assesses the health of an unknown transmission and it offers up the chance to fix some issues. And I say that after these photos were taken. I didn’t know what to expect when I showed up at Cox’s garage, but I can honestly say that I didn’t expect a 100% teardown.

As of writing, we have a parts list and a pile of transmission parts that looks more daunting than your grandmama’s 1,000 piece jigsaw puzzles. Follow along with the pictures for more details: 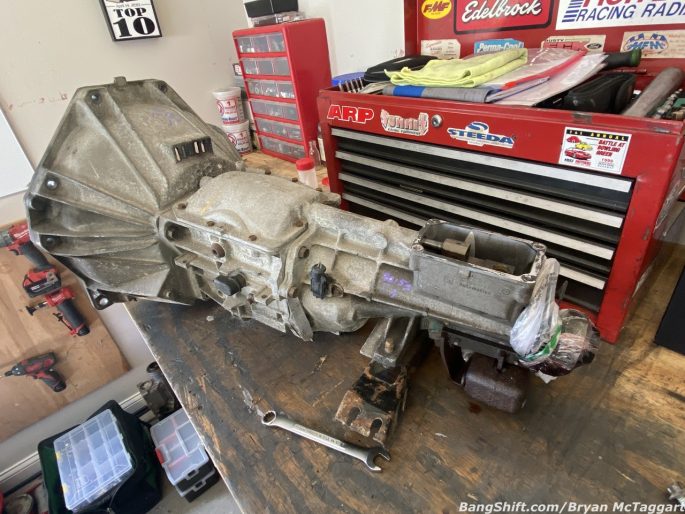 $300, from bellhousing to tailshaft, plus mount and pedal box. So long as the inside of this box isn’t filled with glittery oil or chunks, I’ll call this a win. But we won’t know until we get inside, so off with the bellhousing, the shifter and the plastic bag serving as a diaper for the tailshaft. 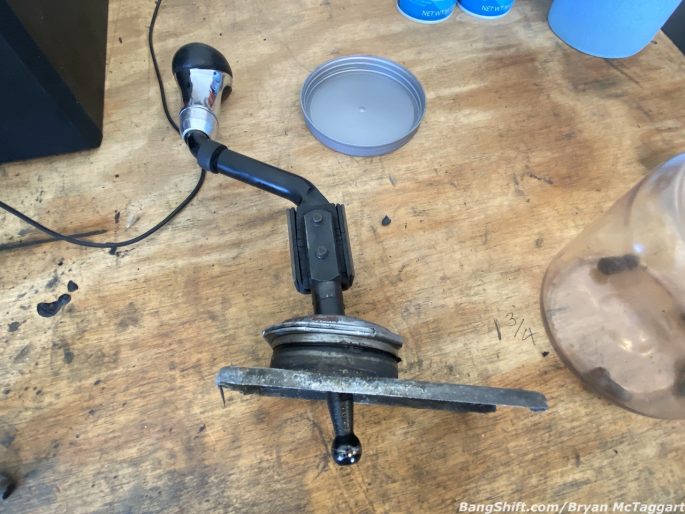 Stock 1999 shifter. It, and the Hitachi wand shift knob, won’t be making a reappearance. 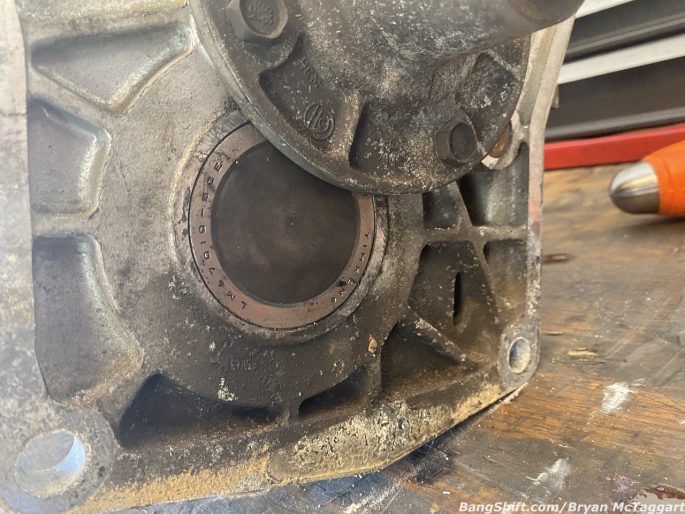 Take note of the cluster gear bearing cap: flush. This is the sign of a World Class-spec T5. V6 Mustangs, folks. 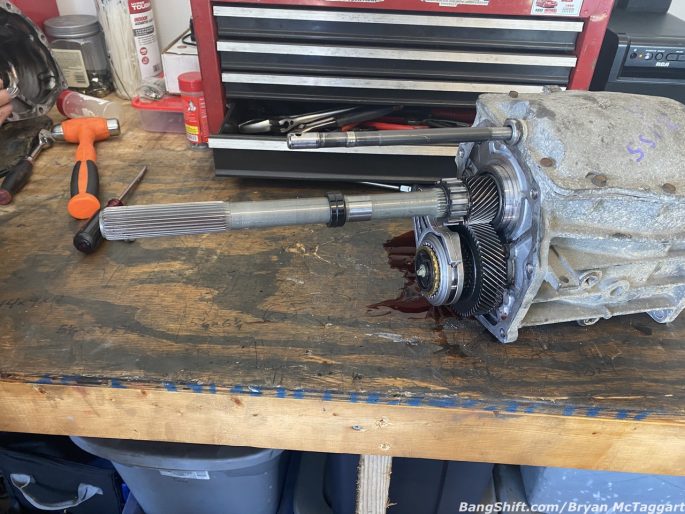 With the tailshaft off, we get our first look at the shift rod (top), the output shaft (middle) and fifth gear (below). 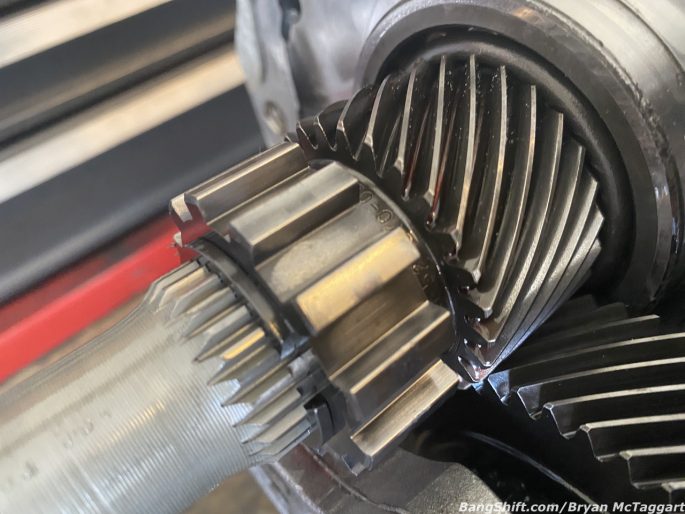 The big chunky buddy there is the magnet ring for the electronic speedometer found on 1994-up cars. This will not play nice with the cable-driven speedometer in the 1989 Mustang, but that’s a bridge to cross later on down the road. 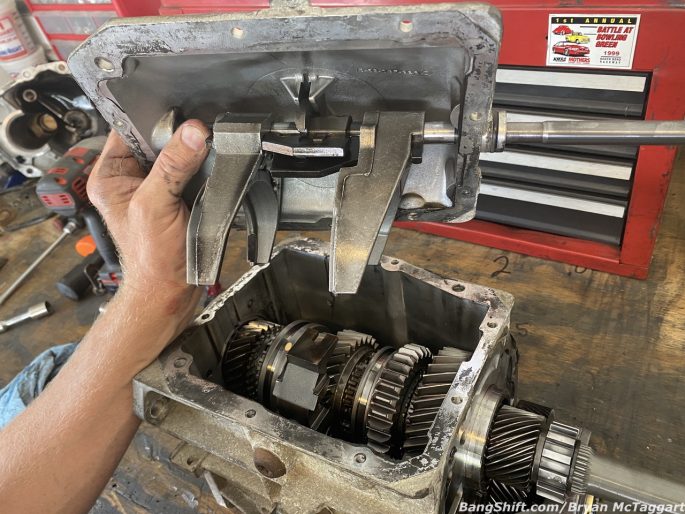 Next up is the top plate, with the shift rod and the shift forks. 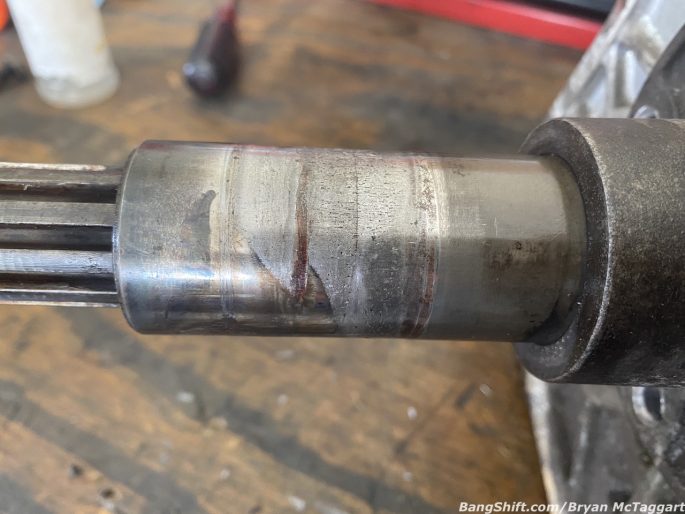 The first sign of trouble: The steel input shaft bearing retainer had a strong ridge around half the diameter of the shaft. This will be replaced…I’ve had enough trouble with input bearings this year. 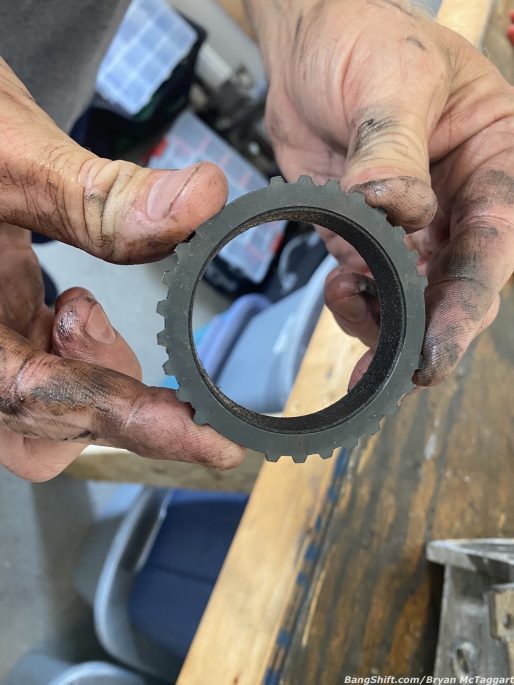 Meet the blocking ring. Made of carbon in a World Class T5, this jewel is what slows down the gears as the shift is being made, allowing the dog teeth to mesh properly. A wear item, we inspected the teeth to see if there was any ridging or strong wear, and made sure that the rings weren’t worn down. These are in line to be replaced, as there was wear throughout. Nothing bad, but it’s time. 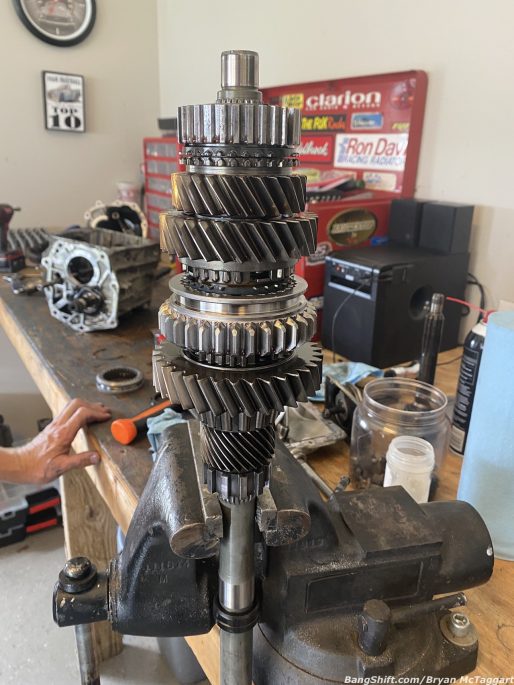 This is the main shaft, out of the box. Every last bit of that magnificent stack came off of the shaft. 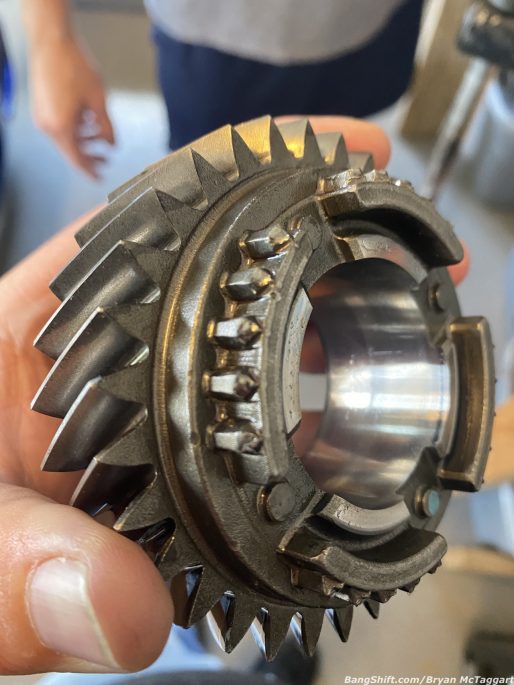 Hello, second gear. Most of the other drive gears exhibited wear that could be cleaned up with a light kiss of a Dremel and some crocus cloth. Second, unsurprisingly, was beat like a mule. This gear needs to be replaced, so by counting teeth and noting the numbers stamped on it, we have determined that this is a 31-tooth second gear for a 068 cluster gear set. 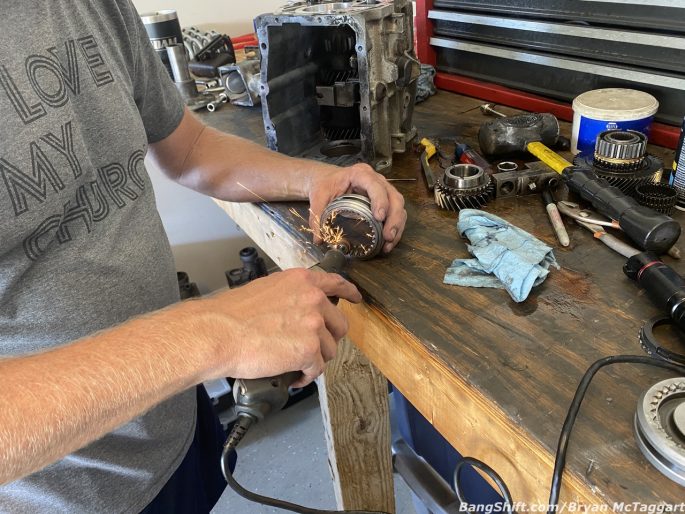 Outside of second gear, the remaining teeth had a mild bit of wear on the 1/2 and 3/4 slider gears, so out came the Dremel tool for a very light cleanup… 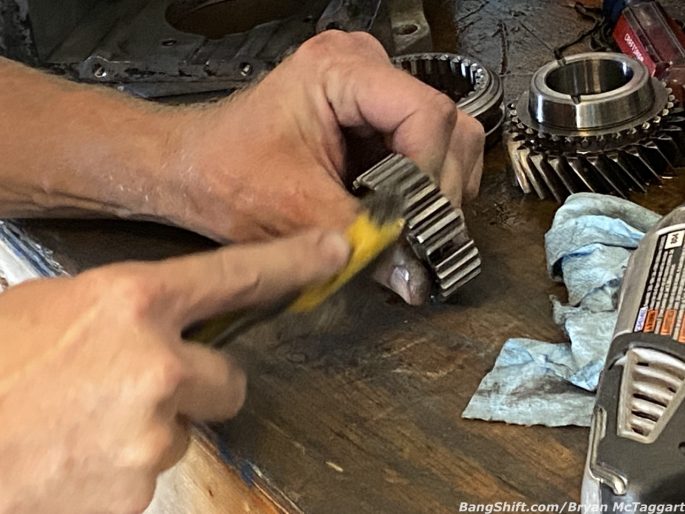 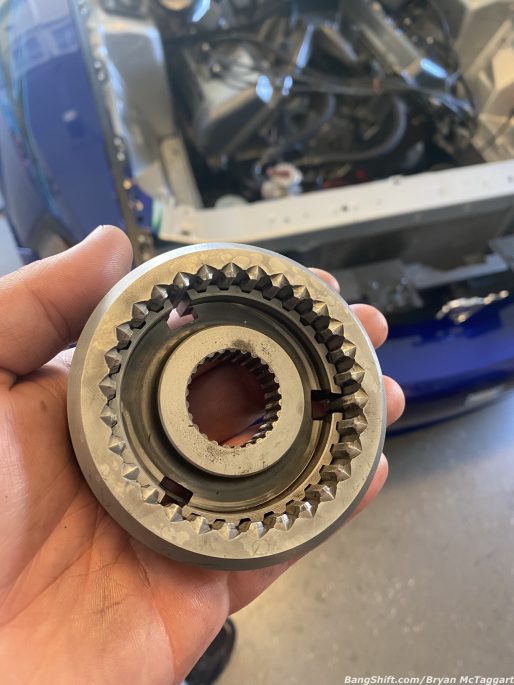 And put together, the engagement is silky-smooth.

Fixing Up The Front End: Vice Grip Garage's Chevelle Has Moved Into The Build Phase! Somebody's Salty: GM Has Put A Bounty Out For Converting FCA Owners!