Unhinged: It’s All About The Journey And Not The Destination When Picking Up A Cheap Car, Right? 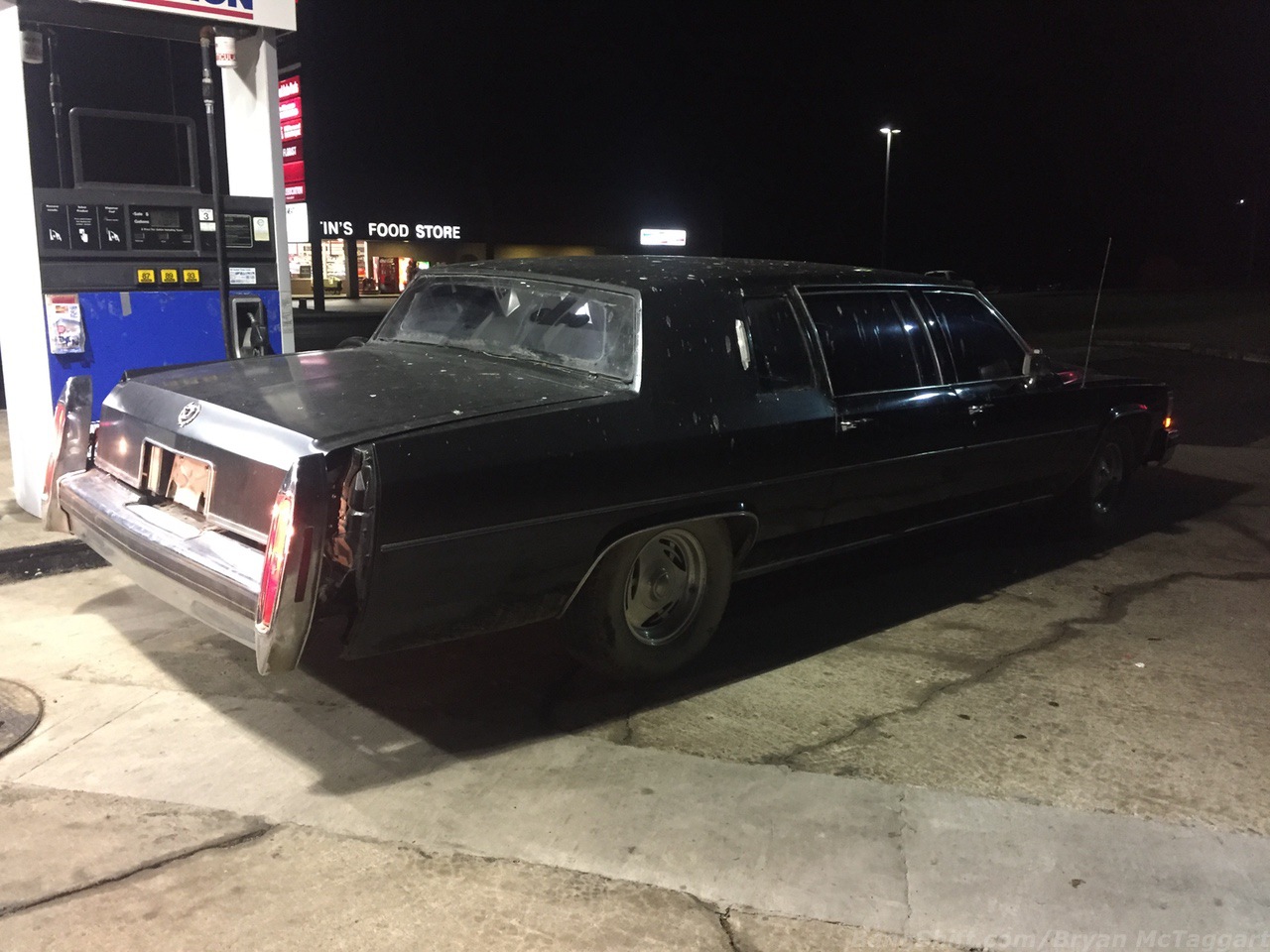 It’s been about ten years since the last time I traded a couple hundred dollars for a rolling picture of bad decisions. That car was a 1981 Dodge Mirada CMX, a car I bought for two reasons: because I missed driving an old Mopar since my hot rod at the time, an ex-cop Dodge Diplomat, had been down for the count for what seemed like forever, and because I was going through one of the lowest points in my lifetime and wanted something I could thrash on without remorse. For six hundred dollars, I dragged a Dodge out of a garage and gave it a second life that became so much more, and the only reason that car isn’t still around is because it’s unit construction was so compromised by rust that there was no saving the shell.

Fast forward to the first King Of The Heap race, the one where I scattered the guts of a 1994 Camaro Z28 all over the playground at NCM Motorsports Park. Yeah, I killed a free car, but what got me was the fun I had. KOTH is a ball, and I wanted to participate. But I don’t have enough free cash to do it on my own, and I’d need a team anyways…KOTH rules require four drivers (it’s a way to make the cost reasonable per person.) I mentioned that to Scott Renshaw, one of my contacts at Martin Dodge in passing one day after doing a test-drive, and I swear to you, readers, it was like watching a light-bulb go off over someone’s head. We hit Craigslist immediately, looking for the first sub-$1,000 Fox Mustang, Cougar, Thunderbird, whatever we could get our grubby mitts on that would work for the series was fine by us. This went on until Scott suddenly stopped, jaw-dropped. “This is awesome!”

It took a couple of weeks to get the logistics figured out and to verify that we had enough backers to make our cheap sled purchase work out, but once the snows melted and our ducks were in a row, Scott and I agreed to go out and to check out our prize. The plan was to leave no later than mid-afternoon from the Bowling Green area and make the nearly 50-mile trek out to…well, the area is simply known as Bugtussle. I swear, I’m not making that part up. Our story starts at least two hours behind schedule, because in order to pick me up (since I’m driving the heap home) Scott has to learn half a county’s worth of backroads. Google Maps, you need to fix your directions, because poor Scott drove through hill, dale, and nearly a flooded creek in order to find my place. We rolled out around sunset in his GMC Yukon with his whole household in tow. I got shotgun, while the two young boys sat in the backseat, his lady in between them to keep some semblance of peace.

The trip was uneventful enough. Except for a stop to change a diaper and an ATM visit to make sure we had the greenbacks necessary, we were good to go until about halfway into our trip. Riding shotgun has it’s responsibilities, and navigation is one of them. Once again, Google Maps failed us, but this time it was due to us driving through a dead zone near Scottsville. Instead of getting on the straightest shot out to the car, the directions took us through some of the most creepy-ass sections of woodland in Southern Kentucky. We’re talking switchback roads that the Yukon had to crawl through, roads barely above the creeks they were crossing, and dramatic drop-offs on the side of the road we were driving up. And when the roads straightened out and opened up, the nervousness of what we were really doing started to weigh in on the adults in the truck. The older of the two boys murmured something to the effect of, “This is creepy” and all I could think was, “It sure is, kid.”

We shouldn’t have worried so much. Other than the most bluntly funny sign we saw in Fountain Run (“Abstinence Works! Not Everyone Is Doing It!” on a cheerful sky-blue board at a four-way intersection) and the fact that it was pitch-black outside with almost no ambient light, there was nothing to be worried about and when we got to where the car was at, the sellers greeted us warmly. We had arrived, and it was time to assess our prize, a 1980 Cadillac Fleetwood extended wheelbase executive sedan. We had been told that there might be an alternator problem, that the battery was probably flat and in need of jumping off and that they wanted it out of their yard ASAP. We needed to assess whether or not this was going to happen. We had brought jumper cables and a jump box, but when the guy said, “Oh, the battery we have doesn’t fit in the car,” I could’ve face-palmed hard enough to leave ring imprints. Of course. The battery. Scott had handled the discussion, and believed that a battery was in there, just in need of a jumpstart. There, he wasn’t wrong. But the battery would not fit under a closed hood, and the nearest parts store was twenty-something miles away back through Kentucky’s version of Sleepy Hollow. We either had to make do or go home empty-handed. 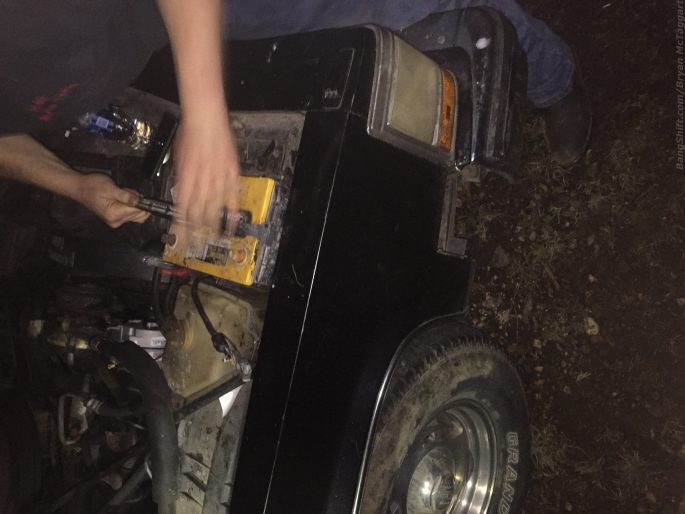 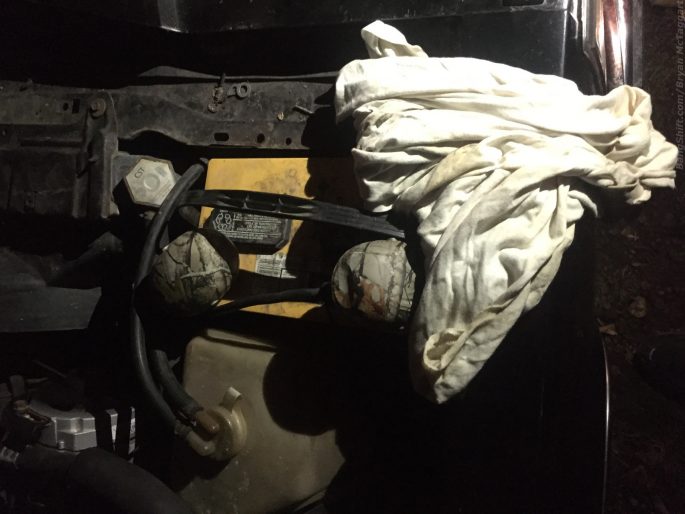 Call it jury-rigging if you will, you aren’t wrong. After fixing a ground wire that came out of it’s ring connector, we wedged the battery they had into the too-small well as far as we could and checked fitment. There was no way that the terminals weren’t going to connect with the hood, so we had to find something that would eliminate contact. That something became an old t-shirt and the cups off of a set of earmuffs. A little bit of mangling and we got the hood latch to close enough. Sure, one corner of the hood was raised up, but that would aid in underhood cooling, right?

Next on the list: would the 368ci Cadillac fire off and would the battery hold a charge? Out came leads that had to be twenty-five feet long. With the Cadillac hooked up to a Chevy truck, the 368 coughed, bitched and finally sputtered into life. The PCV vent looked like a locomotive going up a hill and the cat-less exhaust thumped like Christine the night Arnie drags the wreck home, but it soon settled into a lumpy idle. “Checking the charge” meant that the seller arc’d his knife on the alternator terminals and then we let the car idle with the headlights on for about ten minutes as we went over details. With no change in lighting, we handed off cash (we aren’t disclosing how much exactly, but leave it at a three-digit price tag and lower than we expected), loaded up the car, and made our way to the nearest gas station.

Honestly, the trip home was a surprise. The Cadillac’s carburetor likes to punish you for anything more than ten percent input, the car has trouble climbing steeper hills (imagine that…) and the exhaust leak must be dealt with immediately. But I had the big tank up to 70 mph on the drive back, no sweat and the only time I was very concerned about how things were going was when we drove through Lafayette, Tennessee and managed to find a nest of State Troopers in the middle of handoff…I don’t care that we bought the car a half-hour ago, I’m running with no plate on a sled this large and loud. That’s bad, kids, don’t do that.

Ok, the trip wasn’t all roses. Once Scott and I split up to head to our individual homes, things got interesting. The Cadillac’s carburetor, which had been pretty predictable, had a quick moment of surging before settling back down, I nearly ran over a fart squirrel (skunk) and was rewarded for avoiding the animal with eau de merde sprayed at the trunk, and thanks to snow melt and a flood plain that is just barely inches under the topsoil, I now have a yard ornament that is sunk a couple of inches into the front yard, much to the annoyance of my wife.

So that’s the story on the acquisition of yet another questionable automotive decision. You’ll get more information on the Caddy soon, but I’ll answer a couple of the questions I’m sure you’ll have:

730 Wheel Horsepower In A Minivan! This Honda Odyssey Took On YouTube Gearheads At The Half-Mile! Wheels-Up Launches On Twenty-Twos: This Green Regal Has Torque!

4 thoughts on “Unhinged: It’s All About The Journey And Not The Destination When Picking Up A Cheap Car, Right?”