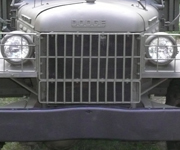 We’re suckers for olive drab, so when we saw this military truck tucked into the rear of a neighborhood backyard, we decided to investigate.

Here are the basics on this mean looking workhorse. The owner Chris says that it’s a military-spec 1968 Dodge Power Wagon. Freiburger pointed out that any Dodge that says Power Wagon is a civvie ride, though this was actually used in the Danish military vehicle before being brought back stateside and sold through a dealer that specializes in these baddies. You may be looking at this thing and saying to yourself that it appears to be from the 1940s, and that’s because you’re right. These Dodges were never redesigned after the 1942 rollout. Some small changes were made but the motif was never altered. We think that’s awesome.

Featuring a fire-breathing, 78hp, 230ci flathead Dodge straight-six for power it’s not exactly a road rocket, but with 5.38:1 gears front and rear it can pull your house off the foundation in low gear and low range selected in the transfer case. The ‘case is also selectable so the driver can engage/disengage the front or rear axle when he sees fit.

These trucks define the term Spartan. With a cloth roof, lack of discernable doors, and a dearth of supple leather and woodgrain in the cab, this thing defines what a truck is. Every inch of this vehicle is steel it has the feel of being capable to pass through buildings while not even so much as chipping the paint. Although with 78hp, we’d be making slow runs through said buildings.

Lots of goods rolled to the front line on the backs of these trucks. The war effort depended on them and they came through with flying colors, how else can you explain a production run that lasted into 1970s and a world wide popularity that is nearly unmatched when it comes to military trucks.

Coming this Spring we’re going to do a full road test on this big hulking piece of iron, in only a way we can. We’ll warn the local authorities first, just so they don’t think there is an invasion going on.

For mucho parts and info on these rigs, see www.VintagePowerWagons.com.