SEMA Stands Up Against Scrappage Plans

Dec 06, 2008Brian LohnesBangShift NewsComments Off on SEMA Stands Up Against Scrappage Plans 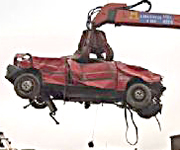 The federal government and hot rodding are never two things we want to hear much about in the same sentence because it’s bound to make us lose our lunch. Thank God for SEMA.

There’s a renewed threat of government-backed scrappage programs to move older vehicles off the roads and entice buyers to purchase new cars in an effort to stimulate sales for automakers. The idea is dumb and wrong on so many levels that we could write a manifesto on it.

Thankfully, being their proactive selves, SEMA has gotten the Action Network fired up and is dealing with this issue before it becomes a front-page story. Catching it before grandstanding congressmen and women start touting it and educating legislators why it wasn’t a good idea in 2002 and it’s still not a good idea now will hopefully prevent the idea from gaining legislative steam.

For some reason we can see the mainstream media jumping all over this like it’s the invention of sliced bread.

Here’s the whole release from SEMA:

SEMA is opposing efforts to revive consideration of federal funding for vehicle scrappage programs. In response to testimony delivered to Congress, SEMA sent letters to members of the House Financial Services Committee and Senate Banking Committee to counter requests that tax dollars be used to entice motorists to trade in older cars and trucks for newer models.

The current discussion of scrappage is tied to the larger debate over how the government should help the domestic automakers and their dealers weather the current financial crisis. SEMA’s letter stated, “Cash for Clunkers as a national policy, even on a voluntary basis, would come at the expense of many small businesses and ignores the better policy option of encouraging consumers to repair and upgrade their vehicles.”

SEMA emphasized that auto restoration, customization and repair shops nationwide, as well as hobbyists, would suffer with the indiscriminate destruction of older cars, trucks and parts they need if scrappage programs were expanded with federal funds.

SEMA also argued that federal funds for scrappage programs would also cut business to the broader independent aftermarket, composed mostly of small businesses. It would be counterproductive for Congress to enact a measure that would hurt the specialty industry and independent auto restoration and repair shops at a time when Congress is seeking to stimulate and support small business.

Finally, SEMA noted that scrappage programs ignore better options, such as vehicle maintenance programs that maximize the emissions systems of existing vehicles. The voluntary repair and upgrade of emissions systems is a win-win for consumers, dealers and manufacturers.

SEMA has also learned that legislators may be also considering scrappage as a clean air measure and are now in contact with these offices to explain scrappage’s shortcomings as an environmental measure. Traditionally, scrappage efforts focus purely on vehicle age rather than actual emissions produced.

SEMA played a central role in defeating federal scrappage legislation in 2002. The association is working with like-minded industry groups now to stop this renewed threat to the auto hobby.