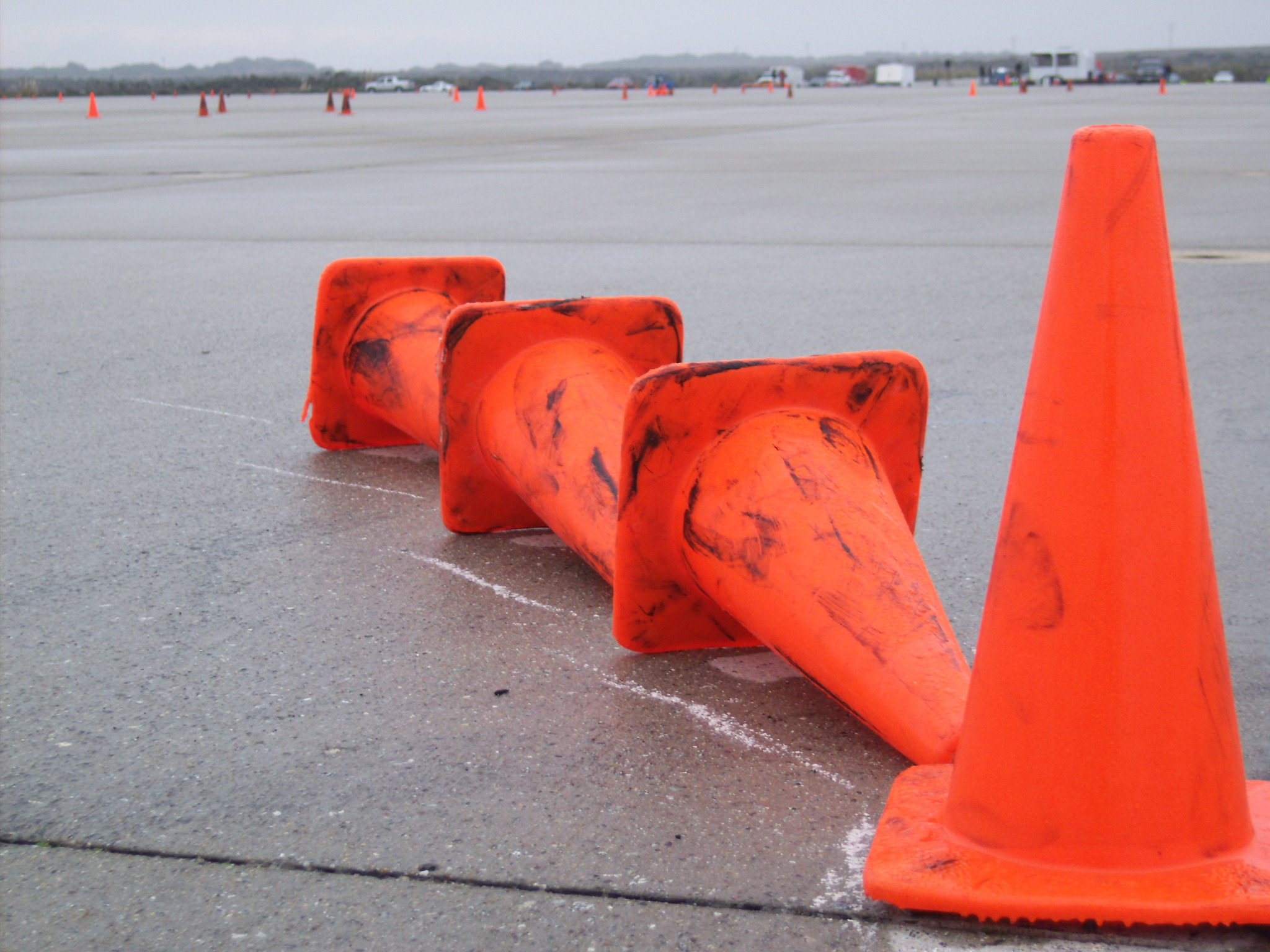 The first Sideways, with Rodney Prouty, got great feedback and Rodney is really cranking on these things because we already have another in the can for next week. Read on. As always with Rodney, it’s an adventure. Throughout the year Rodney will tell us his story and bring us along on his adventures. Breaking stuff, fixing stuff, thrashing, driving, racing, and more, all right here at BangShift.com for you to enjoy. And you ARE going to enjoy it. We know Rodney really well, and he’s one of those guys that inspires you to get your project moving. Does Rodney have 1000hp in his Camaro? no. Does he have this weeks latest hoohaa part? no. Will he be driving his car this weekend? YES. Will he be fast wherever he’s is racing? uh yeah.

If so, then read no further.

I ended last year’s autocross season with a win at the GoodGuys Southwest Nationals and put up pretty good numbers at Del Mar the following week in the Pro Class. Even with a win, I realize that GoodGuys Autocross is a pretty small pond; I’m not an SCCA competitor, I haven’t raced anywhere East of Scottsdale, Arizona and my only road track experience is from Run To The Coast (American Street Car Series). I also have never had any formal training.

I have read every book on Autocrossing, listened to people who would tell me what they thought I should do, asked any fast driver who was willing, if they would either ride with me or if I could ride with them and I studied every fast driver at the track, watching lines and braking patterns. But again, I have had no formal training; I don’t know what I don’t know. 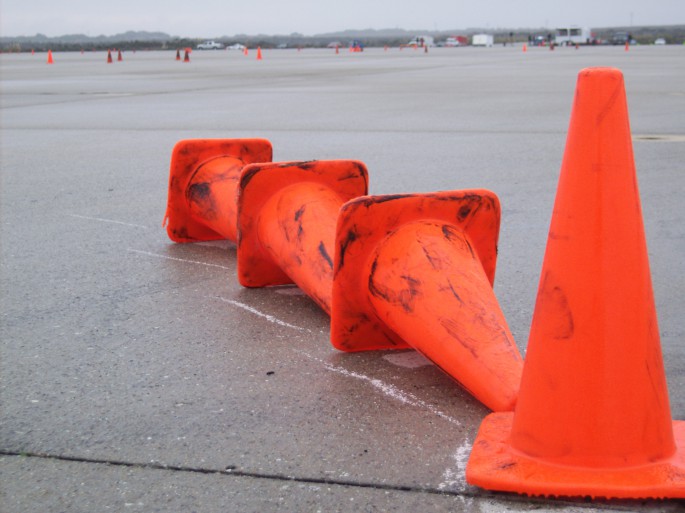 Late last year a racing friend (and multi-year National SCCA Champion) sent me a note saying “There is an event in early February that you absolutely must attend.” I was intrigued and it turned out the “event” was an autocross racing school. My first thought was “Oh crap, I really do suck.” I signed up immediately. The event in my area was organized and run by the Evolution Performance Driving School; a two-day school offering in-car instruction on day one with test and tune unlimited runs on day two. I don’t want to make this out to be a testimonial for Evolution (even though I thought they were great) but I do want to point out what I thought really worked and enhanced my experience. First and foremost: the days were organized, well thought out and trouble-free. The school started on time, spent a reasonable amount of time going over the day’s schedule and safety instructions and we were quickly on the track learning the ins-and-outs of walking a course. 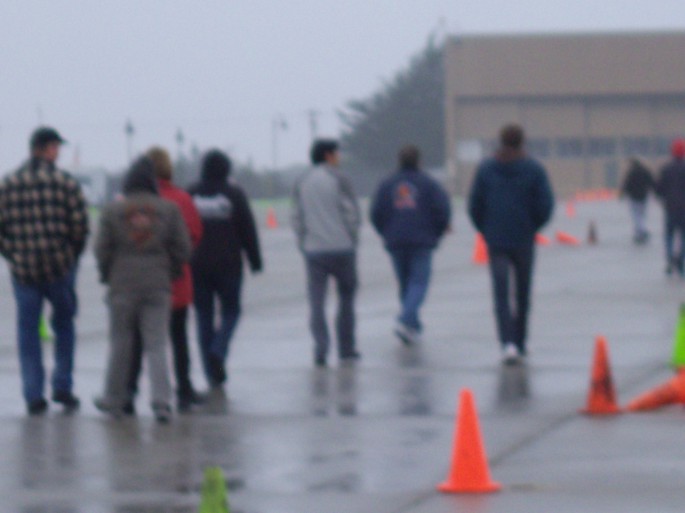 I don’t know about you, but I have a hard time at some of our club events when the driver’s meeting drones on and on forever. My adrenaline starts to peak because my body and mind want to get into the business of racing instead of standing around freezing my ass off, hearing much-elaborated instructions on how to use a walkie-talkie. (This is not to say that safety isn’t important and that much-elaborated-instructions are wrong – at almost every event I see a cone marshall “breaking the rules” and doing something stupid that could result in someone getting hurt.) So, back to school: we had experienced instructors who were well-versed in different key areas of racing and brought different skill sets to the table. Our school also employed several simple tricks to reinforce good habits – including the use of a lot of painter’s tape on windshields. Additionally, the instructors drove my car, this was a key element in instructing me on how to take advantage of my car’s unique set-up. 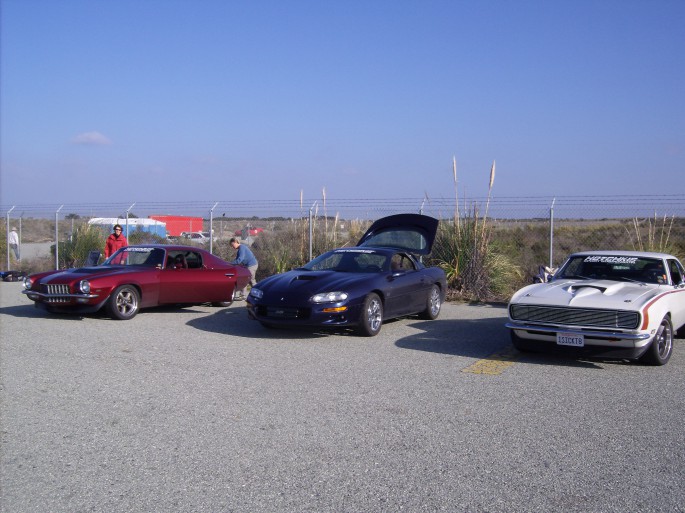 Low and behold, I had something to learn, imagine that! But what I also discovered is that I am doing a lot of things right. Most importantly, I was in school next to that same National Champion, a One Lap of America winner, an American Autocross Series winner and a whole bunch of SCCA jacket wearers. I was running with VERY experienced drivers with trophies and titles, who all knew they had something to gain from the instructors. Egos checked at the gate.

After day one of ride-alongs (and about 30 laps around two different track set-ups) we moved on to day two. The course had changed once more and overnight had brought heavy fog resulting in a wet track. Suddenly my new-found driving skills (possibly laced with some over confidence) were sliding around that track and taking out cones like a drunk driving experiment. Yet one more skill gained – traction control in inclement weather. This would not apply to those of you who don’t drive your cars in the rain…cough,cough,pansy, cough,cough. 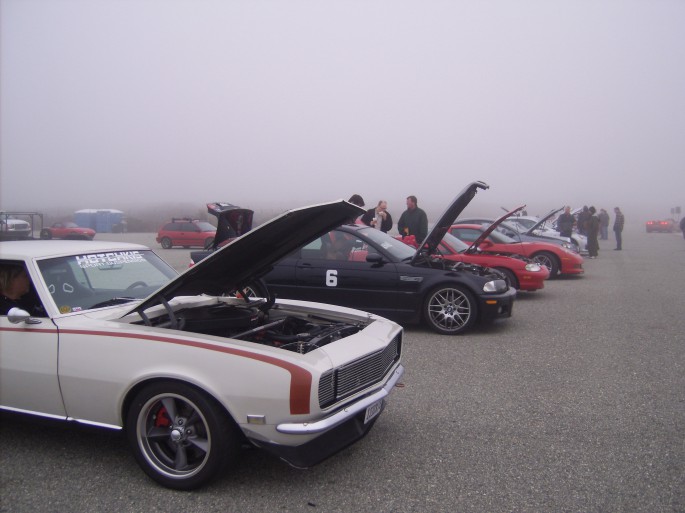 By three o’clock on Sunday I had roughly totalled the number of times I had driven around the track to be more than 80 for the weekend (and I was sharing the car with my girlfriend so my number was roughly half that of others). That is a crap-load of seat time! If you want to talk dollars and cents, I can compare the cost per run of my local club events to average five bucks a run (four scheduled runs and four ‘fun’ runs which doubles if my girlfriend drives the car). Up to this point, I have run club events strickly for seat time and not worried about being competitive or collecting points. Last weekend’s driving was more seat time than I’ve ever gotten (there were only 20 or so cars on Saturday and that number dwindled down to 14 on Sunday). I registered for two drivers (minimal up-charge for a co-driver) and if I count the number of runs my car made – the average cost per run is something in the range of just over two bucks a run –with one-on-one in-car professional instruction! Honestly, how can you go wrong? 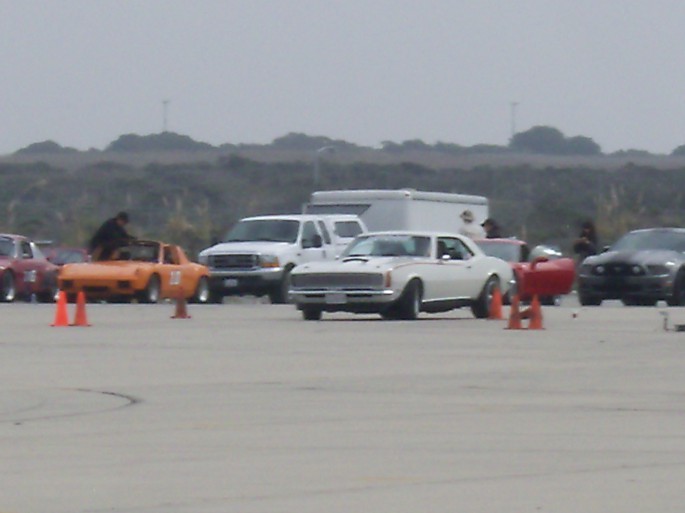 There is a lot of truth to the old adage that there is a new trick for every old dog. Don’t get into the bad habit of “knowing” that your skills are top-notch because you’ve either won, or are winning. Remember that winning is not only a demonstration of your skill but a barometer of your driving in the midst of a group of racers. You are only faster than those who showed up that day. If you are racing in a class of one – well, I’ll leave it up to you to decide if you are a winner or a contestant. If you find yourself blaming a vehicle for your speed, you might want to take a reality check and think about whether or not it might just be you, telling the car to do the wrong thing. Any car is only as fast as it’s driver – this was proven to me when the owner of Orange County Racing School beat my ass (and almost everyone else’s) on the Run To The Coast autocross track – in a Prius.

Watch out, I’m an old dog with some new tricks and I’m looking forward to Spring racing against the rest of you dogs, old and new.

Eiditor’s Note: Big thanks to Rodney for contacting us and asking if we would be interested in his story. If you have an idea for BangShift.com content, please CLICK HERE and submit your idea, story lead, or whatever.

2 thoughts on “Sideways, with Rodney Prouty: An Average Hot Rodders Adventures In Car Building And Racing”